The hearing in the appeals of the 17 Indians sentenced to death for killing a Pakistani man was adjourned for the third time by a Sharjah Court of Appeals on Wednesday. The court fixed September 1 for the next hearing.

"The court did not accept an interpreter arranged by the Indian embassy as he had not been cleared by the United Arab Emirate's ministry of justice," said Bindu Suresh Chettur, the lawyer for the 17 Indians.

The court had also adjourned the case on May 19 and June 16 as the defendants had complained that they did not have an interpreter. The Indians had told the court that they only understand Punjabi, following which the authorities at the Indian Consulate were told to provide a Punjabi-English translator.

But as the court proceedings are in Arabic, an interpreter well versed in the three languages was asked to be made available. Chettur attributed the adjournments to the Gulf state having summer vacations when judges often go on leave.

"We are likely to see more progress only after the fasting month of Ramadan," she said.

A Sharjah court of First Instance had on March 29 found the 17 Indians, 16 from Punjab and one from Haryana, guilty of beating a Pakistani man to death and wounding three others. The incident took place during a fight involving dozens of bootleggers in Al-Sajaa industrial area in Sharjah in January last year.

An appeal was filed on April 7 on behalf of the Indians. Nearly 50 people were allegedly involved in the attack, in which the Pakistani man was beaten to death with metal bars.

Amid an outrage in India over the verdict, the government had asked its consulate in Sharjah to engage a top lawyer and file an appeal in a higher court.

External Affairs Minister S M Krishna had termed the death sentence as 'very unfortunate' and had instructed his ministry to assist the 17 Indians in filing an appeal and also bear all the expenses involved. 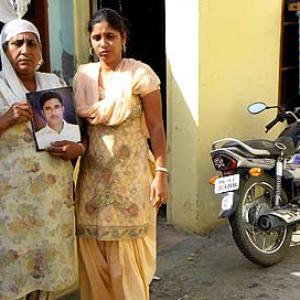 On death row in UAE: Convicts' families speak up