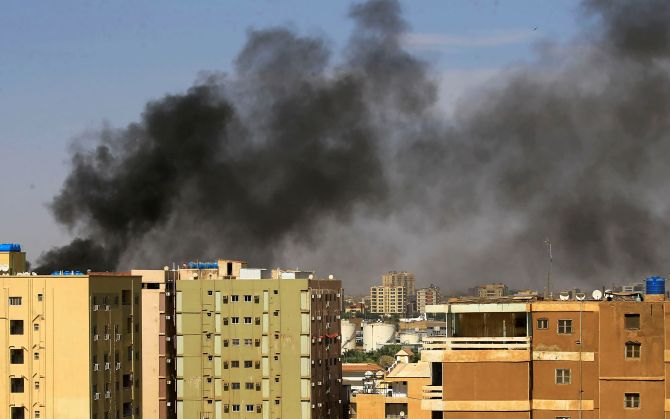 Image only for representation. Photograph: Stringer/Reuters

At least 18 Indians were among 23 people killed and over 130 injured in a horrific LPG tanker blast that destroyed a ceramic factory in Sudan, the Indian mission said Khartoum on Wednesday.

16 Indians were missing after the incident that happened at Seela Ceramic Factory in Bahri area in the Sudanese capital Khartoum on Tuesday.

The blaze sent large plumes of black smoke into the sky of the northern part of the in northeastern African country's capital.

"As per latest reports, but so far not confirmed officially, 18 are dead," the Indian Embassy said in a release.

"Some of the missing may be in the list of dead which we are still to receive as identification is not possible because of the bodies being burnt," it added.

Official Sources in New Delhi said 68 Indians were working in the factory.

"Deeply grieved to learn that some Indian workers have lost their lives while some others have been seriously injured," External Affairs Minister S Jaishankar said.

'The Embassy representative has rushed to the site. A 24-hour emergency hotline +249-921917471 has been set up by @EoI_Khartoum. Embassy is also putting out updates on social media. Our prayers are with the workers and their families,' he tweeted.

The Indian Embassy on Wednesday issued a detailed list of Indians who were hospitalised, went missing or survived the tragedy.

As per its data, seven people have been hospitalised, with four in critical condition.

A total of 34 Indians who survived have been accommodated at the Saloomi Ceramics Factory residence.

According to a statement issued by the Sudanese government, the blast in a gas tanker triggered the fire in an industrial area because of which 23 people were killed and more than 130 injured.

"Preliminary observations indicate a lack of necessary safety measures and equipment at the factory, in addition to random storage of flammable materials," it said.

An investigation has been launched, it added.

Meanwhile, Sudanese Prime Minister Abdallah Hamdok, now on a visit to the United States, expressed his condolences for the victims and said that preliminary reports indicate the absence of necessary safety tools.

"The random storage of flammable materials contributed to the continuation and expansion of the fire and the destruction of the factory completely," he said in a statement from Washington.

"The Council of Ministers will form a committee of inquiry to determine the responsibilities and avoid the recurrence of such unfortunate incidents in the future," he was quoted as saying by Sudan Tribune portal.