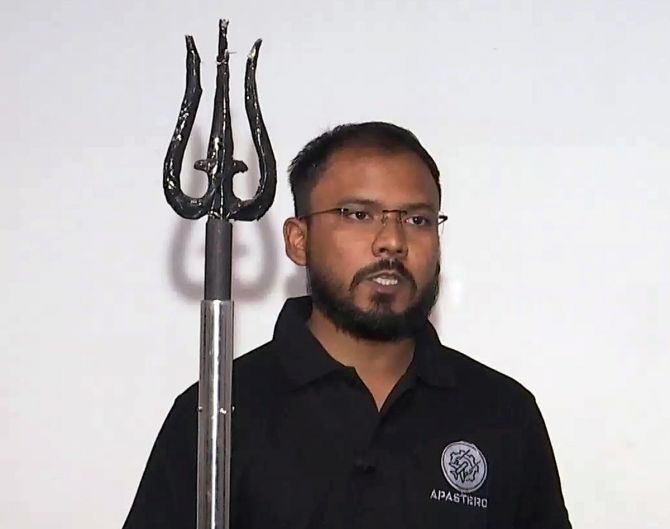 IMAGE: Apastron Pvt Ltd chief technology officer Mohit Kumar speaks on company-developed 'Trishul' that can be used for tasing as well as blocking vehicles of the enemy, in Noida on Monday. Photograph: ANI Photo

A start-up firm in Noida said soon after the Galwan Valley clash, it was tasked by the Indian security forces to provide them equipment to be able to tackle the Chinese and they have provided them solutions in the form of non-lethal weapons inspired by the traditional Indian weapons like the 'Trishul' of Lord Shiva.

"We were asked by the Indian security forces to develop non-lethal equipment after the Chinese used wired sticks and tasers against our soldiers in the Galwan clash. We could also see the Chinese showing their traditional weapons during deployments," Mohit Kumar, Chief Technology Officer of Apasteron Private Limited told ANI.

"We have also developed similar tasers and non-lethal inspired by our traditional weapons for Indian security forces," Kumar said.

Showcasing the different equipment, he said a metal road taser with spikes has been developed with the name Vajra and it can be used for both tasing aggressively attacking enemy soldiers in hand to hand combat as well as puncture their bullet-proof vehicles.

The Vajra also has spikes that discharge current under the permissible limits and can make an enemy soldier ineffective during hand to hand combat during face-offs which 'happen very often', he said.

Kumar showcased the Trishul which can be used for tasing as well as blocking vehicles of adversaries while they try to enter prohibited areas.

He said the best response or feedback coming from tasing equipment is called 'Sapper Punch' which can be worn like winter protection gloves and can be used to give a blow or two with a current discharge to aggressor enemy troops.

While demonstrating the capabilities of the different types of equipment provided to the Indian troops, Kumar said that none of them can cause deaths or any serious injury but can stun the enemy troops, while making them ineffective temporarily during hand to hand engagement.

The Chinese Army troops had attacked Indian soldiers in the Galwan Valley for wearing full riot gear, used tasers and barbed clubs with an aim of causing serious injuries on the border where bullets had not been fired for more than four decades till last year.

Soon after the clash, the Indian troops had also started looking for protective gear as well as equipment to be used in response to the Chinese unconventional weapons.

Upon being asked which all Indian security forces had taken the equipment, Kumar declined to name any specific organisation.

Kumar also made it clear that these non-lethal weapons were not available to be sold to private persons or the general public and are available only for security forces and law enforcement agencies.