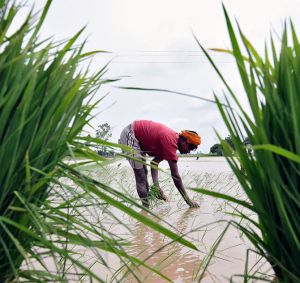 One Chinese lie has been finally nailed this time by a team of Indian scientists who provide irrefutable evidence that rice did originate in India, a fact contested by China.

If one thought the Asian Big Brother was only fighting a proxy war to usurp Arunachal Pradesh, parts of Kashmir and encircle India with a 'string of pearls' in the oceans, there was also a deeper scientific conspiracy to rid India of the tag that our staple food rice actually originated in China and not in Mother India. Ownership of intellectual property is a hugely emotional issue and can lead to bruising skirmishes.
Traditional wisdom has to be guarded at all costs.

Rice is native to India is the verdict of a team of scientists at IARI who, while publishing their findings in the journal Nature Scientific Reports, have effectively proved that the rice varieties grown in India have actually originated in India.

This finding which demolishes the Chinese claim is actually a colateral benefit of a neat new development from Singh's laboratory, the development of a new 'DNA chip for rice' a handy tool that will speed up development of new varieties of rice as the world tries to adapt to a changing climate. This chip will also help finger print rice varieties.

Rice is considered to be the 'king of cereals', hence rival claims on its centre of origin cause a lot of heart burn in research community. In the 20th century, it was widely accepted that rice was independently domesticated in both China and India.

But, Chinese literature attributed the domestication of rice to legendary Chinese Emperor Shennong. This legend from Beijing got bold impetus when a landmark 2011 research paper published in the Proceedings of the National Academy of Sciences refuted the widely held belief that India was also a centre of origin of rice.

It suggested that a single domestication event some 8,200–13,500 years ago, in the Yangtze Valley of China was the source of all rice in the world.

This fact peeved many Indian researchers until this week's new finding which succinctly refutes the Chinese claim.

Concurring with the IARI's claim, Gurdev S Khush, Adjunct Professor, University of California, Davis, and former head, Plant Breeding Genetics and Biotechnology, International Rice Research Institute, Philippines says, "This new paper certainly leads to the conclusion that some of the varieties were domesticated in India."

Therefore, in a way it possibly settles the controversy that China alone should take the credit for giving the world this wonder crop. It seems ancient farmers more than 10,000 years ago independently in both countries figured out that rice was a great plant to cultivate. The National Gene Bank in India houses about 90,000 different varieties of rice and in parts of Odisha and Chhattisgarh wild relatives of rice can still be found.

The 13-member team mainly from IARI actually set out to develop a unique DNA Chip (rather different from a computer chip) that would help look for the best genes and speed up development of new varieties. The scientists developed unique genetic probes which are embedded on the surface of a glass plate and when a suitable genetic mixture extracted from leaves of rice is poured, the wanted regions glow under special conditions this helps the scientists identify the presence or absence of the right gene combinations.

The new IARI Rice Chip accommodates 50,000 combinations of genes on a single plate and is today the best of its kind in the world. Its nearest rival can house only 44,000 variants and was developed by Susan R McCouch at the Cornell University in USA a few years ago.

Singh says, "India was forced to develop its own 'rice chip' after the American team denied India the import of this technology." The team has now patented this new 'rice chip' and the knowhow will be available for all breeders to use.

Singh says traditional plant breeding takes anything up to 15 years to develop a new variety of rice but if one uses the new 'rice chip' the time taken to breed can be halved. This, he says, is especially useful as there is a need to hurriedly make agriculture 'climate resilient' as vagaries of weather affect the globe due to global warming.

The new chip is already finding use and Singh says the popular Pusa Basmati-1 variety has recently been made resistant to a damaging disease called 'rice blast' and to develop this new resistant variant the chip was deployed. The chip is also being used to develop varieties of rice that can tolerate long durations of flooding.

The team developed the 'rice chip' in about 5 years and at a cost of Rs 30-40 lakh and help was taken from a private Californian firm Affymetrix that custom makes these chips. "India should be proud of this breakthrough," says Khush.

According to the Indian Council of Agricultural Research, India has the world's largest area under rice with 42.5 million ha and is the second largest producer with 106 million tonnes - in 2014 next only to China.

It contributes 21 per cent of global rice production. Within the country, rice occupies one-quarter of the total cropped area, contributes about 40 to 43 per cent of total food grain production and continues to play a key role in the national food and livelihood security system.

Rice export contributes nearly 25 per cent of total agricultural exports from the country. However, productivity of rice is only 2.54 tonnes/ha of milled rice as against the global average productivity of 3.28 tonnes/ha. In contrast, China produces more rice by cultivating just about 29 million hectares with yields almost double that of India.

Singh says, "Modern molecular breeding can help bridge this yield gap and the chip will be helpful."

An ICAR estimate for the production of rice in 2050 suggests that by then the population would touch 1.63 billion and India would need to grow about 136 million tonnes of rice, possibly on a smaller cultivable area and with increased shortage of water.

Khush says, "The new rice chip will certainly help speed up rice breeding and thus will contribute to food security."

Pallava Bagla New Delhi
Source: PTI© Copyright 2020 PTI. All rights reserved. Republication or redistribution of PTI content, including by framing or similar means, is expressly prohibited without the prior written consent.
SHARE THIS STORY
Print this article