Indian Navy diving and medical teams joined rescue efforts of Sri Lankan authorities in flood-hit regions as the death toll in the country’s worst torrential rains since 2003 climbed on Tuesday to 193. 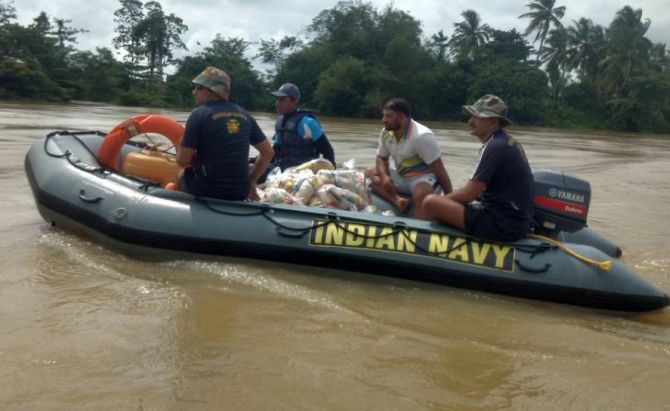 The Disaster Management Centre said the adverse weather condition had left 112 people injured and nearly 600,000 people have been forced from their homes, with thousands suffering structural damage from flood inundation and landslides.

The weather has begun to clear, and many of the more than 100,000 people who evacuated over the weekend had returned home to begin clearing debris and mud from their waterlogged homes. More than 80,000 others remained in relief camps as their homes were either destroyed or remain unreachable.

The Indian contingent of more than 300 navy personnel was assisting in the relief, with divers searching the brackish waters and medical teams seeing patients in makeshift tents set up at shelters.

INS ‘Shardul’ has nearly 200 personnel on board, including specialised rescue, diving and medical teams, as well as a large amount of relief material and Gemini inflatable boats.

“Secy to President of SL and SL Navy chief receiving symbolically the relief material on board the 3rd relief and rescue ship INS Jalashwa,” the high commission of India in Colombo tweeted. 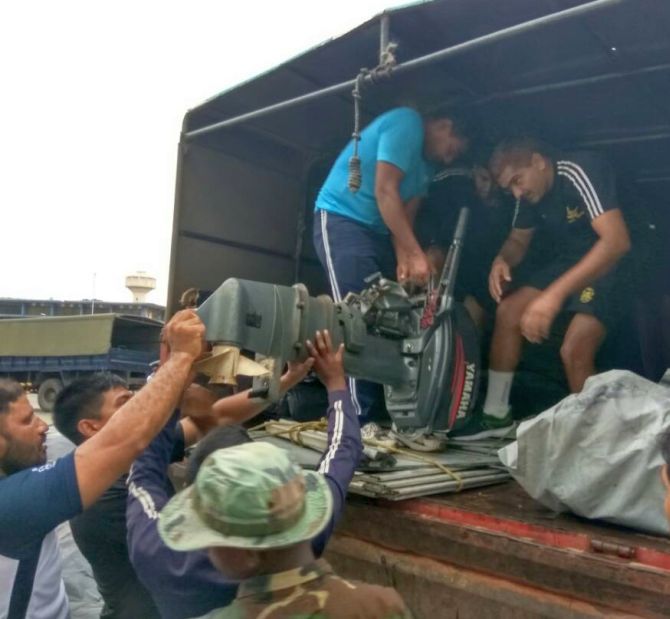 Lankan Cabinet spokesman Rajitha Senaratne said that foreign assistance is continuing to flow in with India, China and Pakistan among the countries sending ship loads of humanitarian aid.

The disaster is described as one of the worst-ever calamities since the 2003 floods.

The official death toll was at 193, with another 94 people were listed as missing, the Colombo Gazette reported.

The MeT Department in its weather forecast said the cyclonic storm Mora is expected to get weakened when it enters the Bangladesh land and the possibility for heavy rain and strong winds will be reduced by tomorrow.

However, under its influence cloudy skies, windy and showery conditions are expected over the country. 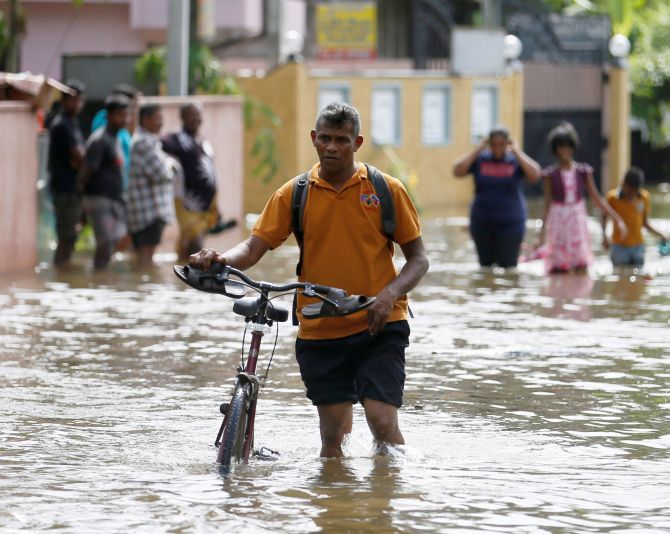 IMAGE: A man pushes his bike through a flooded road in Dodangoda village in Kalutara. Photograph: Dinuka Liyanawatte/Reuters

There were scattered showers in many parts of Sri Lanka in the past 24 hours but flood waters were rapidly receding, officials said.

Lanka’s water supply minister Rauf Hakeem said 40 per cent of those affected did not have access to piped drinking water, and there was an urgent need to clean contaminated wells in flood-affected areas.

“Our workers have volunteered to join a major clean up,” the minister told reporters in Colombo, adding water distribution stations had also been flooded, disrupting the
piped supply.

In total, 545,243 people of 142,811 families had been affected by the weather calamity. The south-west monsoon unleashed torrential rains, which ravaged fourteen districts in the western and southern parts of the country on Friday and Thursday.

The DMC had issued an urgent evacuation warning last evening instructing residents living along the Kelani River and within the Divisional Secretariats of Kollonnawa, Kaduwela, Wellampitiya, Kelaniya, Biyagama, Sedawatte, Dompe, Hanwella, Padukka and Avissawella to move to safer areas.

The DMC said the residents of Meethotamulla were already evacuated. 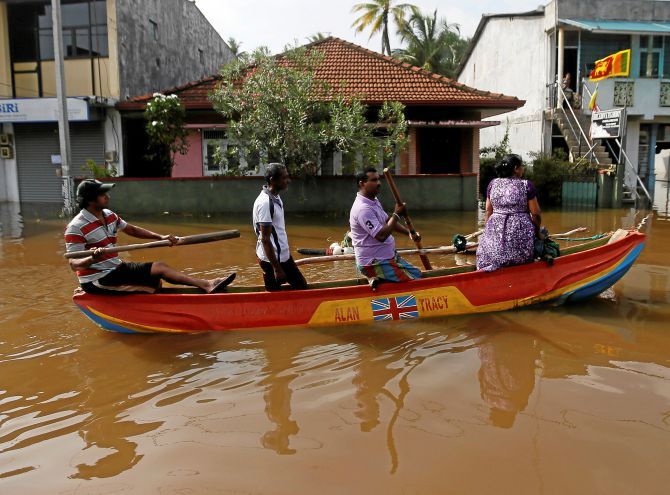 IMAGE: People move in a boat on a flooded road during a rescue mission in Nagoda village in Kalutara, Sri Lanka. Photograph: Dinuka Liyanawatte/Reuters

It said water levels in the Kelani River were rising rapidly as indicted by the water gauges at Nagalagam Street, Hanwella and Glencourse and warned residents to move away from the vulnerable area as it was under an imminent flood threat.

Those living along the banks of Nilwala Ganga, The Gin Ganga and Kalu Ganga were also asked to move to safer areas because of the rising water levels.

Meanwhile, the DMC requested the people to be vigilant on rising water levels.

Charities have warned on Monday that thousands of people affected by the floods and landslides are at risk of potentially fatal diseases such as dengue fever, as the death toll from the disaster continued to rise.