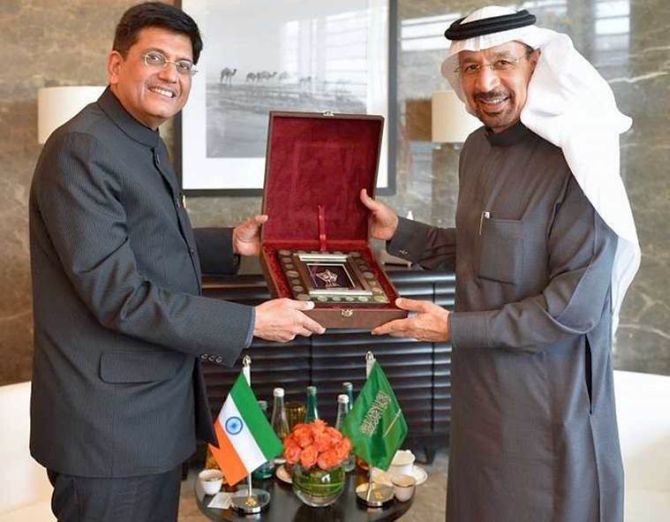 In a goof up, Indian flag was placed upside down on the table during Power Minister Piyush Goyal's visit to an energy summit in Abu Dhabi.

A picture showing Indian flag placed upside down during the meeting of two ministers went viral. The picture was released by photo agencies.

A section of media also reported that the Indian flag was seen upside down during Goyal's meeting with his counterpart in Abu Dhabi.

A member of delegation accompanying Goyal said, "The minister had a bilateral meeting at Abu Dhabi's Four Seasons hotel with the Saudi minister. They had made all the arrangements and the Indian embassy in Abu Dhabi has taken up the matter with them."

Sources in New Delhi said that Goyal "did not notice that flag is placed upside down and thus he did not asked to put it in the right manner".

This is not the first instance when Indian flag was in wrong manner, as an inverted flag was seen at an international meet earlier.

The Indian tri-colour was reportedly placed upside down when Prime Minister Narendra Modi met Japan Prime Minister Shinzo Abe in 2015 at ASEAN summit in Malaysia. Modi noticed it immediately and asked to place the flag in right manner.