A high-level Taliban delegation led by Deputy Prime Minister of Afghanistan's interim government Abdul Salam Hanafi on Wednesday met with an Indian delegation here during which the Indian side expressed its readiness to provide extensive humanitarian assistance to the war-torn country, which is now ruled by the insurgent group. 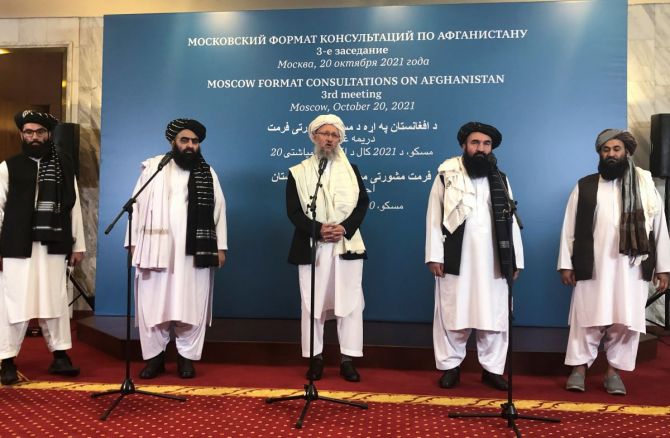 The Indian delegation led by J P Singh, the joint secretary of the Pakistan-Afghanistan-Iran division of the Ministry of External Affairs, which was in Moscow to attend the Moscow Format meeting at the invitation of Russia, held talks with the Taliban leaders on the sidelines of the conference, Taliban spokesman Zabihullah Mujahid said in a brief statement.

There was no official word from Indian government on the meeting.

India had its first formal contact with the Taliban in Doha on August 31.

However, the meeting on Wednesday was the first formal contact between the two sides after an interim Cabinet was announced by the Taliban last month.

The Indian side expressed readiness to provide extensive humanitarian assistance to Afghanistan, Mujahid was quoted as saying by Afghanistan's Tolo News.

India has in the past provided assistance both for infrastructure as well as for humanitarian purposes to Afghanistan.

The two sides also emphasised the need to take into account each other's concerns and improve diplomatic and economic relations, Mujahid said.

The Moscow format was established in 2017, based on a six-party consultation mechanism of the special envoys of Russia, Afghanistan, India, Iran, China and Pakistan to address Afghan issues. Several rounds of talks have been held in Moscow since 2017.

This was the first Moscow format dialogue since the takeover of Afghanistan by the Taliban in August.

The Taliban seized power in Afghanistan on August 15, two weeks before the United States was set to complete its troop withdrawal after a costly two-decade war.

During the Moscow Format meeting, Hanafi called on the international community to recognise Afghanistan's interim government, which is dominated by the Taliban's established leaders, including those who are on the UN blacklist.

"Afghanistan's isolation is not in anyone's interests. And this has been proven in the past," he was quoted as saying by the Afghan news agency Khaama Press.

Hanafi also urged the United States to unfreeze the reserves of Afghanistan's Central Bank, which is about $9.4 billion.