Indian police is the protector of 'karuna' and 'ahimsa': Dalai Lama

The Dalai Lama on Wednesday said it is okay for police to be rigid on their job as long as the motivation of their action is larger good. 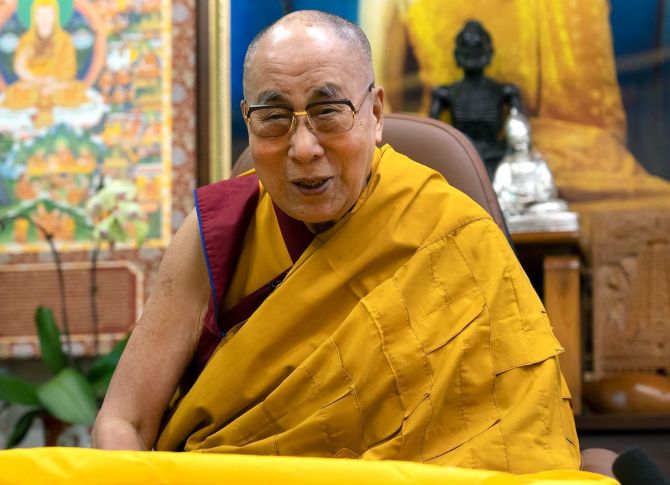 IMAGE: The Dalai Lama, the highest spiritual leader of Tibet, has been living in exile in India ever since he fled during the 1959 Tibetan uprising. Photograph: Courtesy Dalai Lama/Facebook

"Rigidity is simply a method of discipline. Whether it is violent or not entirely depends on the motive. As police, under certain circumstances, you need to use harsh methods, but the larger motivation is protecting people," he said.

The Dalai Lama was giving a talk on "Empathy and Compassion in Policing" at the request of the Indian Police Foundation.

He was addressing the members of the police force virtually from his residence in Dharamshala in Himachal Pradesh.

Emphasising on the need for humans to be compassionate and empathetic, he said such teachings should be part of one's education.

"The west...the British introduced modern education, but you should also try to preserve the thousand-year-old traditions of the country, which are ahimsa, compassion, empathy.

"We should pay more attention to educate students in a secular way. That kind of education will automatically make people more compassionate," the Dalai Lama said, adding that the Indian police is the "protector of karuna and ahimsa".

He said with leaders such as Mahatma Gandhi, Jawaharlal Nehru and Rajendra Prasad, who preached non-violence, India could be an example for the rest of the world to learn about the co-existence of people of "different religions, languages, scripts".

"I believe all human beings are the same. Race, language, culture are secondary and more importantly, we all have to live together on this planet. I appreciate the Indian police for protecting the country with this concept and democratic values," he said.

The Dalai Lama, the highest spiritual leader of Tibet, has been living in exile in India ever since he fled during the 1959 Tibetan uprising.

Asked about the criminal justice system, the Dalai Lama said he was against the death penalty.

"I am always against death sentence. They (criminals) should be put in prison, but death sentence is not right. Any person can make a mistake, but it is always possible to change through proper education and changing surroundings and atmosphere," he said.