News
Business
Movies
Sports
Cricket
Get Ahead
Money Tips
Shopping
Sign in  |  Create a Rediffmail account
Rediff.com  » News » Indian Army chief says there should be no conditions for talks with Taliban

At a time the United States and Russia are reaching out to the Taliban in Afghanistan, Army Chief General Bipin Rawat said the terror outfit should be engaged but talks should be held with it without any preconditions. 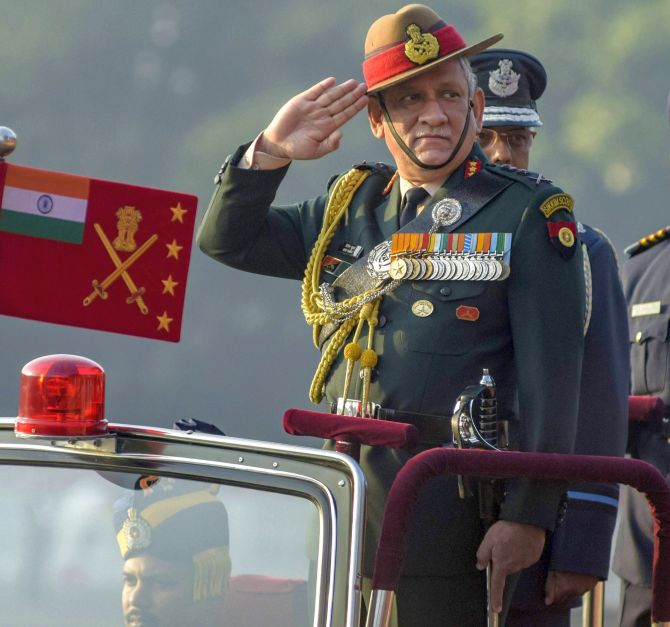 The army chief’s comments on Wednesday, at the Raisina Dialogue, on engaging with Taliban were first such public remarks by a senior functionary of the government.

General Rawat said peace and stability in Afghanistan will be in interests of India, Pakistan and the entire region.

“Yes, there should be talks with Taliban so long as they do not come out with any preconditions and so long as they are looking at lasting peace in Afghanistan and bring about stability in that country. It is in our interests, it is in the region’s interests and it is in Pakistan’s interests,” General Rawat said.

He was asked about several countries engaging the Taliban as part of the Afghan peace process.

“There can be no preconditions attached because when you start attaching preconditions, then it kind of gives a sense of a notion of victory (to them),” he said.

The army chief said Pakistan has always kept the Taliban in its backyard and cautioned Islamabad it may be a cause of concern for the country’s security.

Major powers like the US and Russia have been reaching out to the Taliban as part of efforts to push the stalled Afghan peace process.

India has been a key stakeholder in the peace and reconciliation process in Afghanistan.

In a significant move, India had sent two former diplomats in “non official” capacity to a conference on Afghan peace process in Moscow in November which was attended by a high-level Taliban delegation.

The conference organised by Russia was attended by representatives of Afghanistan as well as from several other countries including the US, Pakistan and China.

India has been maintaining a policy of not engaging with the Taliban and pressing for an Afghan-owned and Afghan-led peace initiative to bring peace and stability in the war-ravaged country.

It is learnt that Iran is also engaged in talks with the Taliban. Iranian sources have said that in case India wants to use Iran’s channels of communication with the Taliban, Tehran will be open to such a proposition.