India ready to give befitting reply if threatened: Rajnath in Ladakh

In a clear message to China from eastern Ladakh, Defence Minister Rajnath Singh on Monday said India is a peace-loving nation that never resorts to any kind of aggression but is always prepared to give a befitting reply if provoked or threatened. 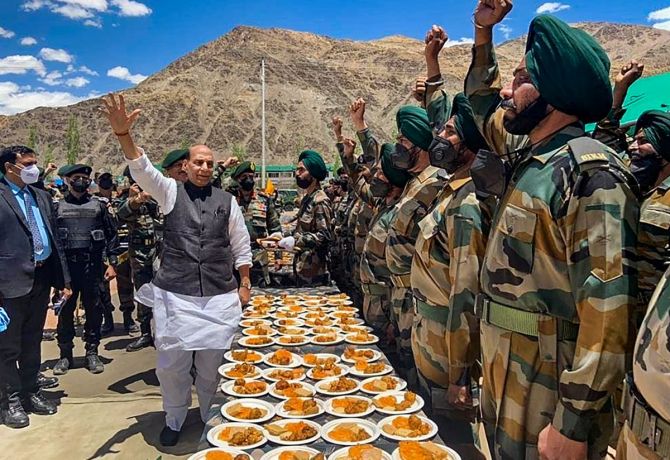 Addressing soldiers in a forward location on the second day of his visit to the region, Singh said India wants to resolve disputes with the neighbouring countries through dialogue but asserted that the nation's safety and security will not be compromised at any cost.

The defence minister also paid glowing tributes to the 20 soldiers killed in the Galwan Valley clashes in June last year and said the country will never forget their sacrifices.

Singh's three-day visit to the region comes in the midst of a stalemate in resolving over a year-long standoff between Indian and Chinese troops in several friction points in eastern Ladakh though they withdrew troops and weapons from Pangong lake areas in February.

The defence minister said India is a peace-loving country and does not threaten anyone but the country will not tolerate if anyone threatens it, seen as a direct message to China.

"We had to face a big challenge along the Northern border last year. But our armed forces displayed their courage and dedication to deal with it...Our Army has the capability to give a befitting reply to every challenge," he said.

The defence minister said disputes can be resolved through dialogue if there is a clear intent for it.

"We have always worked for world peace. We never attack anyone. Our objective has never been to achieve victory against anyone. India has neither attacked any country nor occupied an inch. Our intention is very clear," he said.

He said India never resorts to any kind of aggression, but at the same time, it is always prepared to give a befitting reply if provoked.

The defence minister also assured all possible support to the armed forces, reaffirming the vision of the government of having a strong military that is capable of dealing with every eventuality.

Lauding the exemplary courage displayed by the Indian Army during the incident, Singh said the nation is proud of its armed forces and 'will never forget the sacrifice of soldiers who laid down their lives in Galwan Valley for the country'.

20 Indian Army personnel laid down their lives in clashes with Chinese troops in Galwan Valley on June 15 last year that marked the most serious military conflicts between the two sides in decades.

In February, China officially acknowledged that five Chinese military officers and soldiers were killed in the clashes with the Indian Army though it is widely believed that the death toll was higher.

On Sunday, Singh carried out a comprehensive review of India's military preparedness in eastern Ladakh.

The defence minister, accompanied by Army Chief Gen MM Naravane, was given a detailed briefing about the prevailing situation as well as India's combat readiness in the region by top commanders of the Army at the Leh-based headquarters of the 14 Corps, officials said.

The two sides are now engaged in talks to extend the disengagement process to the remaining friction points. India has been particularly pressing for disengagement of troops in Hot Springs, Gogra and Depsang.

According to military officials, each side currently has around 50,000 to 60,000 troops along the Line of Actual Control in the sensitive sector.