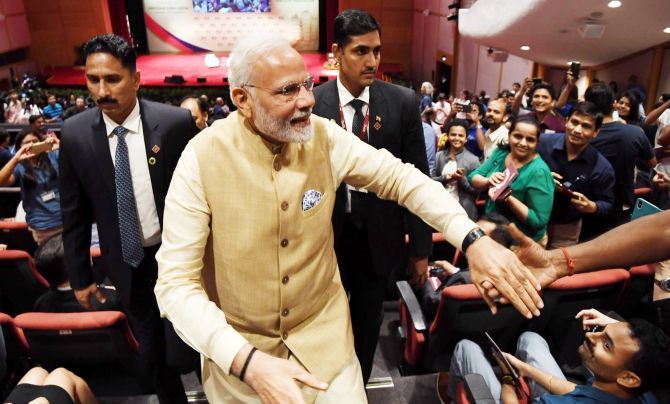 Describing the Indo-Pacific as a 'natural region', Prime Minister Narendra Modi has said that India's armed forces, especially the Navy, are building and expanding partnerships in the strategically vital region for peace and security as well as humanitarian assistance.

10 countries of South East Asia connect the two great oceans -- the Indian Ocean and the Pacific Ocean -- in both the geographical and civilisational sense, Modi said.

Inclusiveness, openness and ASEAN (Association of Southeast Asian Nations) centrality and unity, therefore, lie at the heart of the new Indo-Pacific, Prime Minister Modi said at the prestigious Shangri-La Dialogue in Singapore on Friday evening.

Expounding his vision of the Indo-Pacific region in a keynote address, Modi said, "India does not see the Indo-Pacific Region as a strategy or as a club of limited members, nor as a grouping that seeks to dominate".

The Indian armed forces, especially the Navy, are building partnerships in the Indo-Pacific region for peace and security, as well as humanitarian assistance and disaster relief, he said.

They train, exercise and conduct goodwill missions across the region.

For example, with Singapore, India has the longest un-interrupted naval exercise, which is in its 25th year now, he said, announcing that India will start a new tri-lateral exercise with Singapore soon and India hopes to extend it to other ASEAN countries.

"We work with partners like Vietnam to build mutual capabilities. India conducts Malabar Exercise with the United States and Japan. A number of regional partners join in India's Exercise Milan in the Indian Ocean, and participate in the RIMPAC in the Pacific," he said.

The prime minister noted that India was an active member in the Regional Cooperation Agreement on Combating Piracy and Armed Robbery against Ships in Asia.

He said his government's principal mission is to transform India to a 'New India' by 2022, when Independent India will be 75 years young.

Modi said it was possible for the world to rise above divisions and competition to work together and cited the example of the 10-member Association of South East Asian Nations (ASEAN) as an example and inspiration.

"I am convinced that ASEAN can integrate the broader region. In many ways, ASEAN is already leading the process. In doing so, it has laid the foundation of the Indo-Pacific Region," he said.

The prime minister said the Indo-Pacific is a "natural region". It is also home to a vast array of global opportunities and challenges.

By no means India considers itself as directed against any country. A geographical definition, as such, cannot be. India's vision for the Indo-Pacific Region is, therefore, a positive one, Modi said.

Explaining India's stand, the prime minister said, New Delhi stood for a free, open, inclusive region, which embraces us all in a common pursuit of progress and prosperity. It includes all nations in this geography as also others beyond who have a stake in it.

India places Southeast Asia is at its centre and, the ASEAN grouping has been and will be central to its future.

He also underlined the need to have equal access as a right under international law to the use of common spaces on sea and in the air that would require freedom of navigation, unimpeded commerce and peaceful settlement of disputes in accordance with international law.

His statement comes amidst China flexing its military muscles in the South and East China seas.

China claims almost all of South China Sea and also laid claims on the Senkaku islands under the control of Japan in East China Sea and resorted to aggressive patrols in the few years.

Vietnam, the Philippines, Malaysia, Brunei and Taiwan have counter claims over the South China Sea.

The United States recently renamed its oldest and largest military command - the Pacific Command - to Indo-Pacific Command, in a largely symbolic move to signal India's importance.

Modi also underlined the need for good connectivity to enhance trade and prosperity. He noted that there are many connectivity initiatives in the region.

"They must empower nations, not place them under impossible debt burden. They must promote trade, not strategic competition. On these principles, we are prepared to work with everyone," he said amidst the growing global concern over the so-called Chinese model of 'debt diplomacy'.

He also made it clear that the region can prosper 'if we do not return to the age of great power rivalries'.

Modi stressed that India's friendships are not alliances of containment.

He assured that India's own engagement in the Indo-Pacific Region - from the shores of Africa to that of the Americas -- will be inclusive.

In conclusion, Prime Minister Modi said, India will engage with the world in peace, with respect, through dialogue and absolute commitment to international law.India will promote a democratic and rules-based international order, in which all nations, small and large, thrive as equal and sovereign.