India witnessing over 4 yrs of 'intolerance': Rahul in UAE 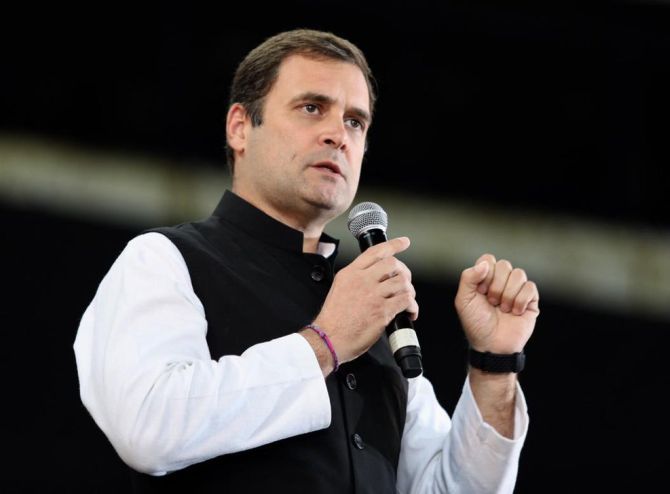 Congress president Rahul Gandhi on Friday praised the United Arab Emirates for declaring 2019 as the 'Year of Tolerance', saying India on the other hand has been witnessing four-and-a-half years 'intolerance'.

Addressing the Indian diaspora at the Dubai International Cricket Stadium in Dubai, Gandhi, who is in Dubai on a maiden visit, said he met Vice President and Prime Minister of the UAE Sheikh Mohammed bin Rashid Al Maktoum and was impressed by his humility.

"At here (in the UAE), it is the 'Year of Tolerance', but back home (in India), I'm sad to say we have been witnessing intolerance for the last four-and-a-half years," Gandhi said in a veiled attack on the Bharatiya Janata Party rule at the Centre.

The values that bring together the people of UAE and India are humility and tolerance; tolerance for different ideas, religions and communities, he said in a fiery speech.

"We can never run a country like India believing that only one idea is correct and all other are wrong. Today, my beloved country India is being divided for political reasons," the Congress president said.

Rebuffing allegations that intolerance was rising in the country, Union Home Minister Rajnath Singh recently said no nation in the world was as tolerant as India.

"India is the only country in the world where people from various prominent religions co-exist peacefully... They have contributed in making India empowered, self-reliant and prosperous and will continue to do so," Singh had said.

Gandhi said India has been devastated by demonetisation and the Goods and Services Tax (GST).

India is not simply a geographical idea, he said.

"First big challenge is generating employment and we can beat China in this domain. Secondly, our farmers are in trouble and we need second Green Revolution," he told a cheering crowd.

"You come to Dubai, you carry the idea of India in your heart. I want to tell you that till the day I die, my doors, my ears and my heart will always be open for you.

"Every single Indian, irrespective of where they live, is responsible to bring India together once again. We have to say enough," Gandhi said.

He said the Indian workers in the UAE have given their sweat, blood and time for the development of this city and have made Indians of all backgrounds proud.

"Single biggest problem that we face in India today is unemployment. We need to take this head-on. We need to show the rest of the world that not only we can beat unemployment but we can also challenge China.

"When I drive through the UAE, I see your energy, blood and sweat. You have helped build this nation, and I feel proud that you have played your part with dignity, togetherness and tolerance," the Congress president said.

India cannot be strong if it is divided, he said.

Taking a jibe at the BJP's 'Congress-mukt Bharat slogan, he said 'we don't need a 'BJP-mukt Bharat'. We want an India where every citizen says he is an Indian first and then the rest'.

"Drawing an analogy between cricket and India, Gandhi said can a divided cricket team win a match? then how can a divided country be successful," he said at the stadium.

"You have mentioned to me that you have a desire to be represented in Indian politics. We are going to make sure that your voice is heard in your country. I want a commitment from you to stand together with us and solve problems back in India," Gandhi said.

He said that without the help of the NRIs, it would be impossible for India to be where it is today.

"In the last century, when we stood up and fought the British, the fight was led by an NRI called Mahatma Gandhi. Mahatma Gandhi picked up the idea of non-violence from every great religion where it is clearly written that violence will not help you achieve anything," the Congress president said.

India's future is directly linked to NRIs future, he said.

"If you are unhappy and feeling troubled, India is unhappy and troubled. The idea of India is to accept tolerance, brotherhood. Non-violence is embedded in our DNA. India has the blueprint not just for itself, but also for the whole planet. You are part of that idea.

"Tolerance is listening to people, embracing people. you cannot have tolerance without humility," Gandhi said.

He said India is where it is because of its farmers.

"Our farmers are in deep trouble, they are struggling and cannot see a future. We have to transform agriculture sector and need a second Green Revolution that can take our agricultural products across the world," Gandhi added.

The stadium was filled up with tens of thousands of people from several states across India. A cultural show marked the start of the event.

Gandhi will visit the UAE's capital Abu Dhabi on Saturday.