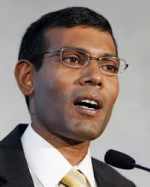 Stepping up pressure on India, Maldives on Monday pressed for facilitation of the arrest of former President Mohamed Nasheed against whom a fresh court warrant was issued on the sixth day of his stay at the Indian High Commission in Male.

However, India is unlikely to ask Nasheed to leave because it feels it was up to the Maldivian leader to take a call, sources said in New Delhi.

A Maldivian court on Monday gave time till Wednesday 4 pm to the police for bringing Nasheed before it, prompting them to approach the foreign ministry asking it to get in touch with the Indian High Commission, where Nasheed has taken refuge since February 13.

"We have received court orders asking us to produce former President Nasheed before it by 4 pm on Wednesday," police spokesman Hassan Haneef told PTI adding the department, through the attorney general, has approached the foreign ministry asking it to get in touch with the Indian Mission to "arrange" and "facilitate" his arrest.

"The ministry of foreign affairs has this afternoon (Monday) informed the Indian High Commission of the court order issued by the Hulhumale' magistrates court, instructing Maldives police service to produce Nasheed to the court under custody," an official Maldivian statement said.

Meanwhile, the situation showed no signs of resolution despite efforts at the official level to do so.

Both India and Maldives also engaged in a war of words with the former denying that its mission was being used for holding political meetings to incite violence here.

After Indian High Commissioner DM Mulay was summoned and issued a strong protest note on Nasheed's stay in the mission, India said, "It is reiterated that no political meetings and activities have been allowed in the mission premises during the presence of former president".

"Only limited visitors are allowed to meet the former President on

According to Maldivian President Mohamed Waheed's office, the note was issued to the High Commissioner to protest "harbouring a fugitive in the embassy premise from where Nasheed is inciting and calling for unrest and violence in the streets".

Forty-five-year-old Nasheed, took refuge in the mission on February 13 to evade arrest warrant issued by a court in a case concerning the detention of the chief judge of the criminal court during his Presidency in January last year.

"The police have been directed by the Court to bring Nasheed before it. The warrant would expire at 4 PM Wednesday," he said.

If Nasheed is found guilty in the case, he could be barred from standing in a presidential election that is scheduled for September 7.

His party -- the Maldivian Democratic Party -- says the trial is an attempt to exclude him from the contest and has challenged the court's legitimacy.

In another development, the President of the Elections Commission Fuad Thaufeeq said it was deeply concerning to see the presidential candidate of the largest political party seeking refuge from a diplomatic office.

"Firstly, Nasheed is a former president, secondly he a presidential candidate of a political party. Thirdly, he represents the largest political party in the country. Each of these factors carries significant weight," Thaufeeq said.

He said the election commission would do everything it could to find a solution for all the parties involved, including the former president.

The president of the EC warned that if Nasheed's trial proved to be a tool to bar him from contesting the scheduled presidential elections, it would cast doubt over the integrity of the election.
Source: PTI© Copyright 2022 PTI. All rights reserved. Republication or redistribution of PTI content, including by framing or similar means, is expressly prohibited without the prior written consent.
Related News: Mohamed Nasheed, Indian High Commission, Thaufeeq, Maldives, India
Print this article 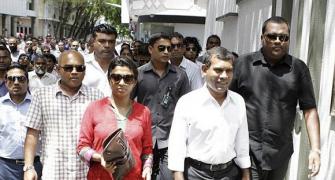