As Nepal undergoes a political transition, India on Friday pitched for implementing the country's Constitution by accommodating aspirations of all sections and assured it of all possible support amid China's efforts to gain ground in the Himalayan nation. 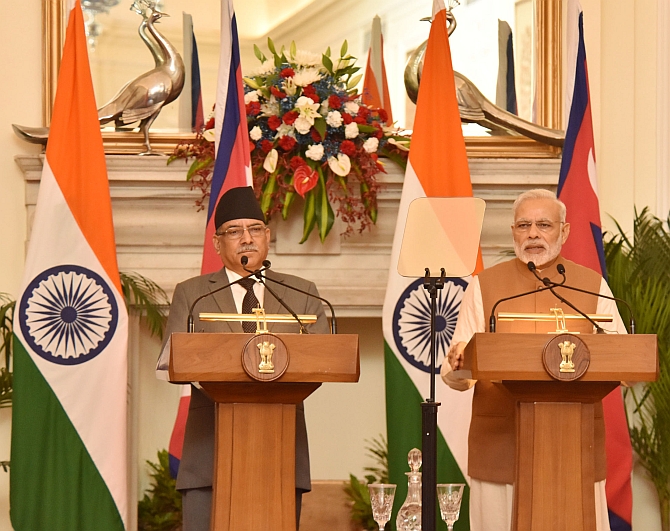 Prime Minister Narendra Modi held an "extensive and productive dialogue" with his Nepalese counterpart Pushpa Kamal Dahal popularly known as Prachanda after which the two sides inked three pacts including one on India extending $150 million for Nepal's post earthquake reconstruction.

It is Prachanda's first visit to India after becoming prime minister for the second time. KP Sharma Oli quit the top post in July following fresh political turmoil due to protest of Madheshi community against the new Constitution.

The two countries also decided to continue cooperation in areas of defence and security.

In a statement to media following the talks, Modi said India hoped Nepal will be successful in implementing the Constitution through inclusive dialogue accommodating aspirations of all sections of its diverse society.

"As immediate neighbours and close friendly nations, peace, stability and economic prosperity (shanti, sthirta aur samrudhi) of Nepal is our shared objective," the prime minister said in the presence of Prachanda.

On his part, the Nepalese prime minister said his country has nothing but "goodwill" for India and that destinies of both the countries are "interlinked".

The prime minister said India has been privileged to be Nepal's partner at "every step" of the country development journey and economic progress. "Our friendship is time-tested & unique. We share our burden during difficult times, just as we celebrate each other's achievements."

Modi said both sides have agreed to focus on "close monitoring" and time bound completion of all development projects being implemented by India in Nepal. He said speedy and successful implementation of ongoing hydropower projects will be ensured.

Showering praise on Prachanda for his efforts to bring stability to Nepal, Modi said, "I am confident that under your leadership Nepal will be successful in implementing the Constitution through inclusive dialogue accommodating aspirations of all sections of the diverse society."

"I conveyed to Prachanda that India stands ready and prepared to strengthen the development partnership with Nepal and we will do so as per priorities of people and government of Nepal," Modi said.

About the political transformation in Nepal, Prachanda said his government was making sincere efforts in taking every section of the society onboard while implementing the provisions of the Constitution.

In his remarks, Modi said security interests of Nepal and India are inter-linked and both sides agreed that "securing our societies is essential for achieving shared objectives of development and growth".

He said continued cooperation between defence and security agencies of the two countries is important to guard the "open borders" that provide opportunities for interaction to the people.

India has a close relationship with Nepal but off late, China has been trying to have some influence over Kathmandu. Oli had tried to forge a deeper cooperation with China. Nepal had signed a transport and transit treaty with China during Oli's tenure as PM.

In the talks, the Indian side clearly conveyed to Nepal that it was ready and prepared to strengthen development partnership with Nepal.

India is Nepal's biggest trade partner and both the sides also decided to further expand trade and investment.

Nepal has been facing political crisis since the adoption of a new Constitution in September last year. Madhesis, mostly of Indian-origin, have been opposing the new statute as they fear it would marginalise them by dividing the country into seven provinces.

Nearly five-month-long Madhesi protests led to the closure of key trading points with India triggering shortage of essential supplies in the land-locked country.

The blockade of trade points with India ended in February after more than 50 people were killed in clashes with police. Nepal had blamed India for the Madhesi crisis, a charge rejected by New Delhi.

Modi said Prachanda has been a "catalytic force" of peace in Nepal saying he has personally played a role in strengthening democratic institutions.