If the new request for 18 more fighters translates into a contract, the Sukhoi-30MKI fleet size will go up to 14 squadrons, or 290 fighters.
Ajai Shukla reports. 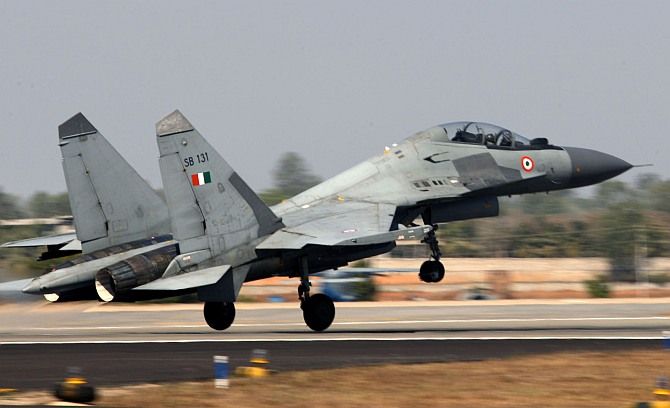 To alleviate the shortfall of fighter aircraft in the Indian Air Force, New Delhi has approached Moscow for one more squadron of Sukhoi-30MKIs fighters.

Production of this additional tranche can begin in 2020, when HAL Nashik completes delivery of an ongoing contract for building 222 of the twin-engine, heavy fighters.

Russia's defence export agency, Rosoboronexport, is currently working on an offer and a price.

It is understood that the existing Russian licence for building 222 Sukhoi-30MKIs in Nashik would be extended to 18 more aircraft.

Before HAL Nashik began building Sukhoi-30MKIs under licence, the IAF bought 50 fully built Sukhoi-30MK fighters in late 1990s, which were later upgraded to the MKI configuration.

Including them, the IAF planned to fly 13 squadrons of the Sukhoi-30MKI -- or 272 fighters.

If the new request for 18 more fighters translates into a contract, the Sukhoi-30MKI fleet size will go up to 14 squadrons, or 290 fighters.

The Sukhoi-30MKI has been a 'Make in India' programme well before it became a buzzword for indigenisation.

The Sukhoi-HAL production contract mandated that Sukhoi-30MKI production in Nashik would be incrementally indigenised in four phases.

Even so, various constraints have restricted indigenisation to just a little over 50 per cent of the value of each Sukhoi-30MKI.

A key reason for this is that most of the raw materials, including 5,800 types of titanium blocks and forgings, and aluminium and steel plates, must be sourced from Russia.

A titanium bar from Russia weighing 486 kg is machined down to a 15.9 kg tail component.

The titanium shaved off is wasted.

Yet, India continues to import titanium extrusions because manufacturing them here is not economically viable in the tiny quantities needed for Su-30MKI production.

Similarly, the HAL-Sukhoi production contract stipulates that 7,146 'standard components' like nuts, bolts, screws and rivets must all be sourced from Russia.

The IAF got its first Sukhoi-30s in the late 1990s, after India signed a $1.5 billion contract for buying 50 fully built Sukhoi-30MK fighters.

In 2000, a memorandum of understanding was signed with Sukhoi for the staggered production of 140 Sukhoi-30MKIs.

These would be built at HAL's Nashik plant and progressively delivered by 2017-2018.

Since buying the first Sukhoi-30MKIs in 1996, the aircraft has been substantially improved. First, with the IAF demanding better aerodynamic performance, Russia added canards and a thrust-vectoring engine, the AL-31FP, which can push the fighter in multiple directions, adding agility.

Then, the IAF specified a sophisticated avionics suite, creating the 'MKI configuration' -- with I standing for India.

In 2014, HAL integrated the BrahMos air-launched cruise missile onto the Sukhoi-30MKI.

This allows the fighter to carry the missile over a thousand kilometres and then launch it at a target another 295 km away.

If concluded, a contract for 18 more Sukhoi-30MKIs will be welcomed by both the IAF and HAL.

The air force, which is down to 30 squadrons and faces further reductions as MiG-21s and MiG-27s retire, will welcome another squadron of their backbone fighter.

For HAL, this will mean another 18 months of production for their Nashik facility, which faces an uncertain future after the Sukhoi line closes.