India votes with the West against Sri Lanka's rights record

Sri Lanka on Thursday faced a major embarrassment as the United Nations's top human rights body adopted a resolution censuring it for alleged war crimes in the conflict with LTTE as India joined the West in backing the US-sponsored move.

In the 47-member UN Human Rights Council, 24 countries, including India, voted for the resolution and 15 against it, while eight nations abstained.

India, which normally does not vote on nation-specific resolutions, made a last-minute departure in the current instance after overwhelming pressure from parties in Tamil Nadu, especially the Dravida Munnetra Kazhagam, which had even considered pulling out its ministers from the government at the Centre, to vote against Sri Lanka.

Interestingly, India's neighbours like China, Pakistan and Bangladesh, voted against the motion. Maldives said the resolution was not necessary and Sri Lanka should be given time to implement the recommendations of the Lessons Learnt and Reconciliation Commission (LLRC).

The vote came after a spirited opposition from Sri Lankan Plantation Industries Minister Mahinda Samarasinghe, who said no one from outside could dictate to his country about human rights.

The resolution asked the government to explain how it would address the alleged violations of international humanitarian laws and how it would implement the recommendations of the LLRC.

It also encouraged the UN Human Rights Office to offer Sri Lanka advice and assistance and the government to accept it.

Explaining its position on its vote for the resolution, India said it believes the primary responsibility for promotion and protection of human rights lies with the states.

It said while it subscribes to the broader message of the resolution and the objectives it promotes, it also underlined that any assistance from the Office of the High Commissioner on Human Rights or visits of UN Special Procedures should be in consultation with the Sri Lankan government.

"These are norms which all of us in the Council subscribe to. A democratic country like Sri Lanka has to be provided time and space to achieve the objectives of reconciliation and peace," the explanatory note said.

In the Council, India said, everyone has the responsibility to ensure that "our conclusions do contribute to this objective rather than hinder it."

India also urged the Sri Lankan government to take forward the process of broader dialogue and show concrete movement towards a meaningful devolution of powers, including the implementation of the 13th Amendment and beyond.

"We would also urge that Sri Lanka takes forward the measures for accountability and to promote human rights that it has committed to. It is these steps, more than anything we declare in this Council, which would bring about genuine reconciliation between all the communities of Sri Lanka, including the minority Tamil community," it said.

India said the UN Council has also been briefed by the government of Sri Lanka in this session on the series of steps taken to implement the report and other measures.

"We welcome these steps. We are confident that implementation of the report will foster genuine reconciliation," it said.

Noting that it cannot remain untouched by developments in Sri Lanka, India said it will continue to remain engaged with the country to take forward the process of reconciliation to secure for all its citizens a future marked by equality, dignity, justice and self-respect.

Contending that stability and peace had been achieved in the island nation after the end of the decades-old conflict in May 2009, he told the Council that Sri Lanka should be given time to "further consolidate" the progress achieved.

He said the resolution embodies "several harmful elements that clearly violate important principles that will have adverse ramifications not only for my country but for many other countries in the future."

Reiterating Sri Lanka's stand that a resolution to the Tamil question can be found only inside the country, Samarasinghe said the resolution also runs counter to the principle of international law that "domestic remedies" must be exhausted and should be the first resort prior to "super imposing" external mechanism.

"Situation in the country does not warrant attention and criticism in this resolution. We are justified in asserting that we require time to realise comprehensive reconciliation," he asserted.

Samarasinghe said the Sri Lankan government took a stand that it will not accept such a resolution to ensure that a bad precedent is not established by this Council.

"The way in which you deal with this matter today will decide whether or not purely parochial if not political agendas are removed from the promotion or perception of human rights permitted to prevail," he said ahead of the vote.

Referring to the report of the LLRC, he said it has been just three months since it was submitted to the government and that the country should be given time to act on the recommendations. 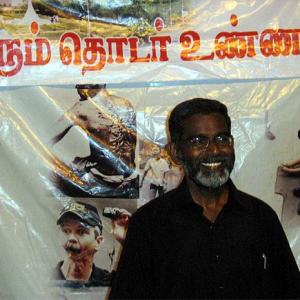