India will soon make available many more COVID-19 vaccines to other countries after two Made-In-India jabs have already been introduced to the world, Prime Minister Narendra Modi said on Thursday while emphasising the country's global responsibility in fighting the pandemic. 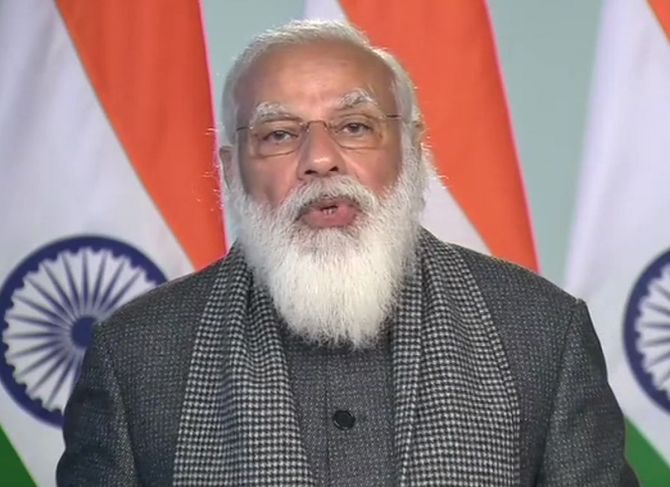 In a special address at the World Economic Forum's online Davos Agenda Summit, Modi also said he wants to assure the global business community that situation will now change rapidly on the economic front also and invited businesses from all over to participate in the country's growth journey.

Modi said that some had said in February-March 2020 that India would be the worst affected country by COVID-19 and would face a 'tsunami of corona infections'.

"Some had talked about 70-80 crore people expected to get infected in India, while some talked about over 20 lakh possible deaths but India did not let the disappointment get better of it," he said.

"When COVID arrived, India had its share of problems. At the beginning of last year, several experts and organisations had made several predictions that India would be most affected by the pandemic.

"Looking at the condition of countries with better health infrastructure, the world was right in worrying about us," he said.

The prime minister, however, said in the midst of numerous doubts, he was here with 'a message of belief, positivity and hope from over 1.3 billion Indians'.

Modi said, "We transformed the fight against coronavirus into a people's movement and today India is among the most successful countries in saving lives."

"We focussed on developing COVID-specific health infrastructure, we trained our human resources to fight against this pandemic and we made full use of tech for testing and tracking," he said.

Modi said India has started the world's largest coronavirus vaccination programme and its speed can be imagined from the fact that over 23 lakh health workers have been vaccinated in just 12 days.

In the next few months, we would complete our target of vaccinating 30 crore old people and people with co-morbidities, he said.

He said India has ensured that it follows its global responsibility by sending essential medicines to over 150 countries while COVID-19 vaccines are also being sent to other countries.

"While two India-made vaccines have already been introduced to the world, many more vaccines will be made available from India," he said.

"India's upcoming vaccines will help other countries at a swifter pace to fight the pandemic," he added.

"In this time of crisis, India has also fulfilled its global responsibility from the beginning, following thousands of years old prayer of our country -- 'Sarvey Santu Niramaya': May the whole world be healthy," he said.

He said 18 per cent of the world's population is in India and it is a country that saved mankind from a big disaster by saving its citizens from the pandemic.

We're not only fulfilling our needs of PPE kits and masks, but also exporting and helping other countries. India has started the world's largest vaccination drive as well, he said.

"We guided the world on how India's traditional medicine, Ayurveda, can help in improving immunity.

"Today, India is sending its vaccine to several countries and is helping in developing the infrastructure for successful vaccination, thus saving lives of citizens of other countries," he said.

With a consistent rise in cumulative recoveries, India's COVID-19 recovery rate has reached nearly 97 per cent which is one of the highest globally, according to the Union health ministry data.

Nearly 1.53 lakh people have lost their lives in the country so far.

Later, interacting with business leaders on the WEF platform, Modi said the COVID-19 crisis has taught us the basics of human values and that 'Industry 4.0 is for humans, and not robots'.

He called for ensuring that technology becomes a tool for ease of living and not a trap.

Modi said India has stressed a lot on reforms and incentive-based stimulus in recent times.

Even during COVID-19, India has paced structural reforms in all sectors and these reforms are being supported by PLI-schemes, he said.

"During the corona crisis, many countries were worried about how to reach their citizens directly financially, but you will be shocked to know that during this time India has transferred more than Rs 1.8 lakh crore directly to the bank accounts of more than 76 crore people," he added.

"Its massive consumer base will further grow and help global economy. India, along with possibilities, is filled with confidence and drive as there have been continued emphasis on reforms and incentive-based stimulus.

"Structural reforms during corona times have been supported by production linked incentives. India offer ease of doing business as there is a predictable and friendly environment from tax regime to FDI norms," he said.

He also referred to a new initiative to provide a unique health ID to 1.3 billion citizens for easy access to healthcare.

"I assure you that every success of India will help the world to succeed. Our Aatmanirbhar Bharat mission is fully committed to global good and global supply chain," he said.

India continued its economic activities during COVID with infrastructure work worth trillions of rupees, providing employment, the prime minister said.

"We stressed on saving every single life. India, now, is walking ahead to become Aatmanirbhar," he said. 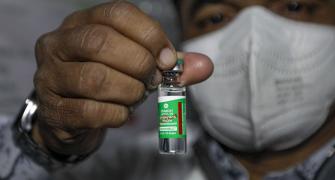 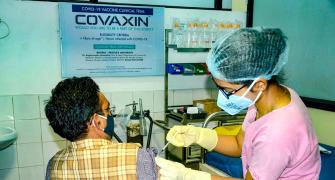 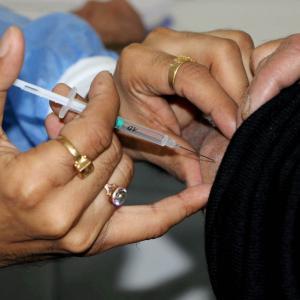