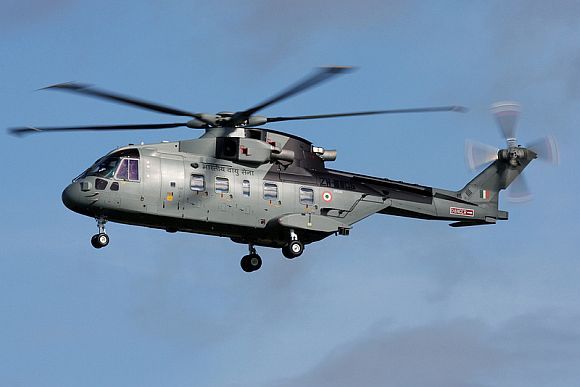 Armed with fresh details on the alleged kickbacks, India has initiated steps to cancel the Rs 3,600 crore-chopper deal with Anglo-Italian firm AgustaWestland by issuing a show cause notice to it in this regard.

The latest initiative by the defence ministry comes soon after the attorney general gave his opinion that there was breach of contractual obligations and the integrity pact by the firm, sources said in New Delhi.

The defence ministry has issued a showcause notice to the firm for cancellation of the deal and given it four weeks time to respond to it, they said.

The ministry has also gathered important details during the ongoing investigations in the deal in both India and Italy since February.

The government has already frozen the contract for supply of 12 AW-101 VVIP choppers to the Indian Air Force after allegations that Rs 360 crore were paid as bribe in which two top officials of the company were accused. The IAF has already received three helicopters and delivery of the rest has been put on hold.

The sources claimed that the government had been preparing to issue the notice for cancellation much before AgustaWestland took the step.

The defence ministry had earlier issued a show cause notice to AgustaWestland on February 15 asking it to explain within seven days the bribery allegations against it after the alleged scam was exposed in Italy.

In the notice, the company was asked why the Rs 3,600 crore deal of 2010 should not be scrapped. In its reply, AgustaWestland had denied the allegations.

Former IAF chief S P Tyagi is among those under cloud in connection with the kickback charges. The CAG also recently highlighted loopholes in the deal.

Soon after the arrest of the firm's former CEO, Guiseppe Orsi, in Italy in connection with the case, Defence Minister A K Antony had suspended the payments to be made to it along with the delivery it was due to make to IAF of the remaining nine choppers.