Defence Minister A K Antony and his Russian counterpart Anatoly Serdyukov, who met in New Delhi over the last two days, also decided to take forward the joint fifth generation combat jets and mutirole transport aircraft projects over the next 10 years, under which India would get about 250-300 FGFAs and 45 MTAs.

They signed a protocol for furthering of defence ties between the two nations and continuing till 2020 the military technical commission, a unique arrangement the two nations have.

"There are some areas of concern such as the delays (in delivery of defence systems). All these issues, we discussed over yesterday and today," Antony said at a joint press conference with Serdyukov in New Delhi on Friday, after the 10th inter-governmental commission for military and technical cooperation meeting.

However, he said, the two sides also decided to find a satisfactory solution to the issue, with Serdyukov assuring Antony that he would take "personal interest" in the projects and satisfactorily solve the problems they were encountering.

"I am happy about the outcome of the meeting," he added. He pointed out that India and Russia were pursuing a large number of joint projects for defence systems and equipment for the Army, the Navy, the Air Force and the Defence Research and Development Organisation, including BrahMos supersonic cruise missiles.

India had bought the Gorshkov in 2004 for US $ 974 million and its delivery, originally fixed for 2008, has now been finalised for 2012-13 after India fulfilled Russia's demand for $ 2.34 billion early this year. In the case of the Akula-II nuclear powered submarine, the two sides have now reportedly postponed the delivery to March next year, though India was supposed to get it last year after trials.

Serdyukov seconded Antony's views on the numerous joint projects, but said he too had raised certain issues with his Indian counterpart, which the two sides agreed to resolve to the satisfaction of both.

Noting that there was a "great volume" of joint projects between the two countries, Serdyukov said, "It is but natural that in such a number of projects we have some delays. I underscore that it (the delays) is not critical to these projects."

Noting that FGFA and MTA would be the "flagship" Indo-Russian joint projects for the next 10 years, Antony said India would get about 250-300 FGFA and 45 MTAs. He said the two countries had already signed the shareholders agreement for the MTA project, while a joint venture was being finalised for the same. "We have discussed all issues and these have been resolved satisfactorily. We are in the final stages and the proposals are currently with Indian government for some technical formality. We will finalise them very soon and sign the final agreements within a few months," he added.

Noting that FGFA would be "most modern" fighter jet, Antony said along with MTA, the joint projects were the major achievements of the bilateral defence relations between India and Russia this year.

"FGFA and MTA will be shining examples of Indo-Russian relations for the next 10 years," he said.

Serdyukov said the 10-year cooperation agreed upon from 2011 to 2020 was a "great challenge.

"Though it was a good plan, there was "serious work before us. We will try to do our best to give very good, positive results," he added.

Serdyukov said the two countries had made progress in their talks for the FGFA project and that the design, time frame and development plans had been finalised.

"The proposals (for FGFA) are with the Indian government. Sukhoi corporation and HAL would participate in the project from the Russian and Indian sides respectively," he added.

Describing the Indo-Russian defence relations as "very close", Serdyukov cited the BrahMos cruise missile joint development and production as a "very good experience and very good example" and assured that the positive experiment would be a model for important future projects.

He also noted that the two armies had revived a joint counter-terrorism exercise, which would be held later this month in India.

Antony said Russia was India's "trusted partner" for a long time and would remain so in future too.

"Over the years, through this cooperation, we have been able to jointly develop and produce many systems and equipment. Russia also provided us very important equipment and other sophisticated items for the armed forces," he added.

On the delay in Russia sending its Mi-28 attack helicopters and Mi-26 heavy lift transport helicopters for trials, Serdyukov said his country would be able to deliver the two helicopters within the time frame if it won the contracts for the same.

Indian Air Force had recently floated tenders for an estimated $ 2-billion order for 22 attack helicopters and 15 heavy lift helicopters in which the Russian platforms are competing.

While Mi-28 is up against US aerospace major Boeing's Apache AH-64D attack helicopter, Mi-26 is competing against Chinook heavy lift helicopter.

Antony and Serdyukov also reviewed the status of several ongoing and proposed projects, including the licensed production of T-90 tanks and the establishment of a repair and overhaul facilities for various Russian origin defence equipment in India, a defence ministry statement said.

The two sides also decided to hold another joint army exercise in Russia next year as a follow-on to the Indra series that would be held later this month in India.

The Russian chief of defence forces would visit India in November this year and the Russian navy chief in January next.

The IGI-MTC was established in the year 2000 and was governed by the umbrella inter-governmental agreement. Both countries had also signed another agreement on long-term

programme for military and technical cooperation from 2011 to 2020 during Prime Minister Manmohan Singh's visit to Moscow in December last year. 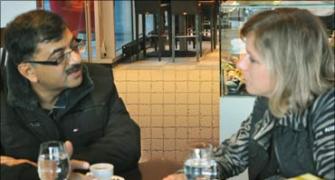