The missile hit a live satellite flying in a Low Earth Orbit after it traversed a distance of almost 300 km from earth within three minutes of its launch. 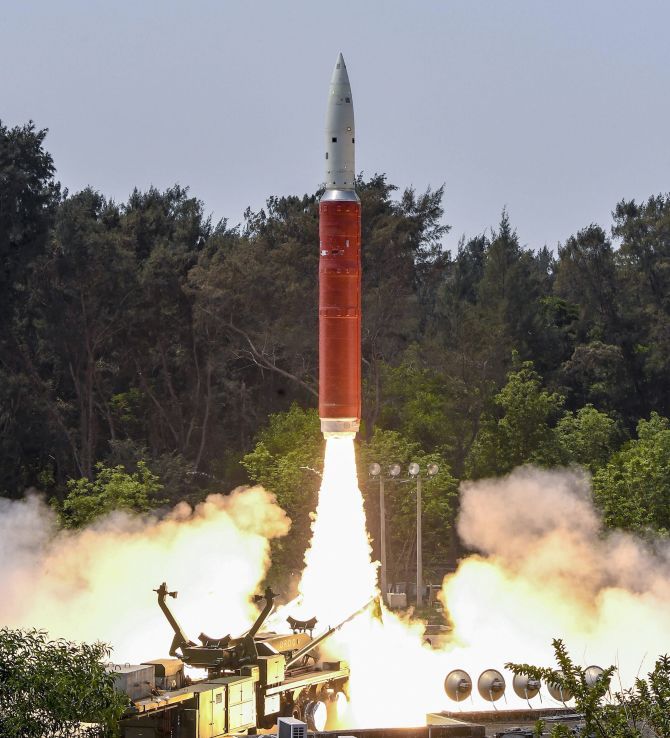 India shot down one of its satellites in space on Wednesday with an anti-satellite missile to demonstrate this complex capability, Prime Minister Narendra Modi announced, making it only the fourth country to have used such a weapon.

Declaring India has established itself as a global space power after the success of the operation 'Mission Shakti', Modi said the missile hit a live satellite flying in a Low Earth Orbit after it traversed a distance of almost 300 km from earth within three minutes of its launch.

Modi said the space mission in which scientists including from the state-owned Defence Research and Development Organistion were involved gave the country a 'new strength' and was an effort to secure a 'fast growing India'.

"A strong India can be a guarantor of peace in the region and beyond. Our strategic objective is to preserve peace, not prepare for war."

The announcement was made by the prime minister in a broadcast to the nation on television, radio and social media shortly before which he advertised his address on Twitter, calling it an 'important message'.

Modi's tweet set the social media abuzz for about half an hour triggering speculation on whether the address would be about Emergency or bringing back underworld don Dawood Ibrahim or killing terror outfit Jaish-e-Mohammed chief Masood Azhar or yet another surgical strike by the armed forces.

"A short while ago, India's scientists have successfully hit a target in space with an Anti-satellite or ASAT missile. The target was a live satellite which was flying in a Low Earth Orbit.

"The missile travelled a distance of almost 300 km from earth and hit the target within three minutes of its launch," Modi said shortly after noon in his address which he said is for a 'very special purpose'.

The address comes a fortnight before the start of the multi-phase Lok Sabha polls.

As Modi's announcement set off a political slugfest, DRDO chairman G Satheesh Reddy said the anti-satellite missile test is a reflection of the country's growing capability to develop critical technology and that it will act as a 'good deterrence', Reddy said the clearance for the project was given over two years ago.

"It is a great achievement for India," he told PTI.

Experts and former scientists said though India had the capability by 2012 to carry out a similar test, the political leadership at that time did not give a clearance to it.

According to former DRDO chief Vijay Saraswat, India had the capability to carry out the test in 2012-13 but there was no political clearance.

Former ISRO chairman G Madhavan Nair also said India had the anti-satellite missile capability over a decade ago but there was no political will at the time to demonstrate it. The Congress-led UPA was in power from 2004 to 2014.

The Bharatiya Janata Party targeted the previous United Progressive Alliance government for not demonstrating the anti-satellite missile capability when it was in power while Opposition leaders mocked the prime minister over his address to the nation.

The ministry of external affairs (MEA) came out a 10-point explainer to say the anti-satellite missile test was carried out to verify India's capability to safeguard space assets and that it was not directed against any country.

The MEA said the test was done in the lower atmosphere to ensure there is no space debris.

"Whatever debris that is generated will decay and fall back onto the earth within weeks."

India has successfully demonstrated its capability to interdict and intercept a satellite in outer space based on complete indigenous technology, it said, adding that the satellite used in the mission was one of India's existing satellites operating in lower orbit while a ballistic missile defence interceptor was used to hit it.

Noting that India has achieved a remarkable success, Modi in his address said so far only three countries in the world -- the US, Russia and China had this capability.

"Today, India has become the fourth country to acquire this status as a space power. There can be no bigger moment of pride for every Indian than this."

Modi assured the international community that the new capability is not directed against anyone and it does not violate any international law or Treaty obligation to which India is a party.

"India has no intention to threaten anyone. This is an effort to secure a fast growing India," he said, adding that defending and securing valuable space assets is equally important.

"From the point of view of India's security and economic development, today's ASAT missile will give the country new strength."

The prime minister said all the objectives that were set by the scientists have been fulfilled and that it is a matter of pride for all in the country that the mission was accomplished using an indigenously developed ASAT missile.

"In the journey of every nation there are moments that bring utmost pride and have a historic impact on generations to come. One such moment is today."

The announcement was preceded by a meeting of the Cabinet Committee on Security(CCS) presided by the prime minister.

Soon after his address to the nation, Modi interacted with scientists involved in 'Mission Shakti' via video conference, a statement from the prime minister's office said.

The forces which work for peace and goodwill must remain ever-powerful to achieve it, he told them.

He told the scientists that the successful test firing of anti-satellite missile is in line with the government's 'Make in India' initiative and the scientists involved in the project have proved that India can achieve any goal.

'The prime minister said that India follows the philosophy of 'Vasudhaiva Kutumbakam -- the world is one family. He, however, also emphasised that the forces which work for peace and goodwill must remain ever-powerful for the achievement of peace,' the statement read.

Congratulating the scientists on their success, the PM said the entire nation is proud of the scientists for achieving what they had set out to accomplish.

'The prime minister asserted that for global peace and regional peace, India should be capable and strong,' the statement said.

The scientists thanked the PM for giving them this opportunity to prove themselves, it said.

The Congress accused Modi of indulging in theatrics and playing politics over scientists' achievements while other opposition parties complained to the Election Commission alleging violation of Model Code of Conduct(MCC).

Sources in the Election Commission said issues related to national security and disaster management do not fall under the ambit of the model code.

Congress president Rahul Gandhi took a swipe at Modi wishing him 'happy World Theatre Day' even as he congratulated the DRDO while Samajwadi Party chief Akhilesh Yadav said Modi got himself an hour of 'free TV time' and diverted nation's attention away from issues on the ground.

Trinamool Congress chief and West Bengal Chief Minister Mamata Banerjee alleged that it was 'yet another limitless drama' by Modi to 'reap political benefits'.

Union Finance Minister Arun Jaitley hit back at the opposition and accused the erstwhile United Progressive Alliance government of not granting scientists permission to build the country's own anti-satellite missile, saying it lacked 'capability and clarity'.

"While we are discussing national security and geo-political situation, the opposition is raising 'clerical objections' in Mission Shakti. It reminds of the saying 'when the finger points to the moon, the idiot always points to the finger,'" Jaitley told reporters.