India is faced with challenges arising out of "extraordinary militarisation" in its neighbourhood and "completely unprovoked aggression" on the northern border, Defence Minister Rajnath Singh said at the inaugural Indo-Russia '2+2' dialogue even as the two nations inked a pact for joint production of over six lakh AK-203 rifles and extended military cooperation till 2031. Ahead of the '2+2' talks, Rajnath and Shoigu co-chaired a meeting of the India-Russia Inter-Governmental Commission on Military and Military-Technical Cooperation (IRIGC-M&MTC) during which the two sides inked the agreement for joint production of over six lakh AK-203 assault rifles at a manufacturing facility in Uttar Pradesh's Amethi and extended the pact on military cooperation for 10 years (2021-31).

The rifles will be manufactured for the Indian armed forces at a cost of around Rs 5000 crore. The 10-year pact on military cooperation is a renewal of an existing framework. 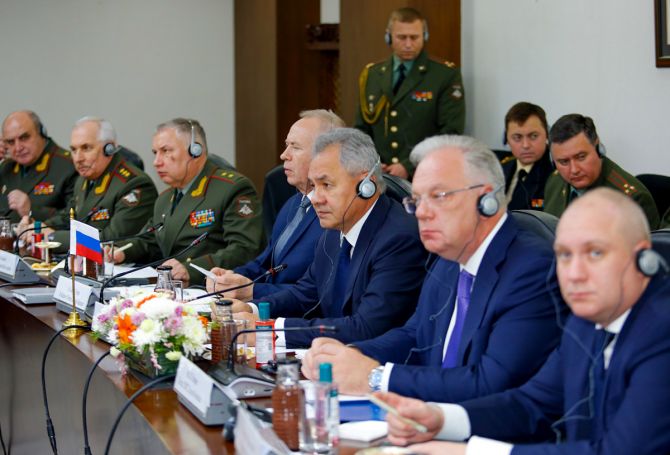 "The pandemic, the extra-ordinary militarisation and expansion of armament in our neighbourhood and the completely unprovoked aggression on our northern border since early summer of 2020 have thrown in several challenges," Singh said without naming China.

At the same time, he said India is confident of overcoming these challenges with the strong political will and inherent capability of its people.

"Recognising that its development needs are colossal and that its defence challenges are legitimate, real and immediate, India seeks partners who are sensitive and responsive to India's expectations and requirements," the defence minister said.

Singh also hoped that Russia will remain a major partner for India in these "changing circumstances".

"From ministry of defence we have urged for greater military-technical collaboration, advanced research, co-development and co-production of defence equipment leading to the self-reliance of India," Singh said.

"We are optimistic about Russia's cooperation in all the domains," he added. Referring to his bilateral meeting with Shoigu, Singh said he had discussed the "emerging challenges India is confronted with and the enhanced requirement of India for closer military and military-technical cooperation with Russia”.

In his remarks, Jaishankar said ties between India and Russia have been "close and time-tested" in a world that has changed so much.

"They (the ties) have been exceptionally steady," he said.

"We are meeting at a critical juncture in the global geopolitical environment which is in great flux, especially in the aftermath of the Covid-19 pandemic," he said.

"As close friends and strategic partners, India and Russia have been working together to safeguard our common interests and to ensure peace, progress and prosperity for our peoples," Jaishankar said.

The external affairs minister also said that the situation in Afghanistan has wider repercussions including for central Asia.

"The Covid-19 pandemic has raised questions about the current model of global affairs. But the long-standing challenges remain even as new ones emerge. Prominent among them are terrorism, violent extremism and radicalization. The situation in Afghanistan has wider repercussions, including for Central Asia," he said.

Shoigu said bilateral military-technical cooperation is especially important in India-Russia relations, and that he and Singh had finalised plans for future cooperation. "Both Russia and India have a similar worldview of a more poly-centric, more multi-polar, more equitable world order. We advocate similar or identical positions on the most important political and military issues,” he said.

Tweeting on his discussions with the Russian ministers, Singh said India values its special and privileged strategic partnership with Russia.

"India deeply appreciates Russia's strong support for India. We hope that our cooperation will bring peace,  prosperity and stability to the entire region. Glad that a number of Agreements/Contracts/Protocols were signed pertaining to small arms and military cooperation," he tweeted.