India on Wednesday rejected as uncalled for Chinese Foreign Minister Wang Yi's comments referring to Jammu and Kashmir at a meeting of the Organisation of Islamic Cooperation (OIC) in Islamabad, amid contacts between the two sides over a possible visit by him to New Delhi this week. 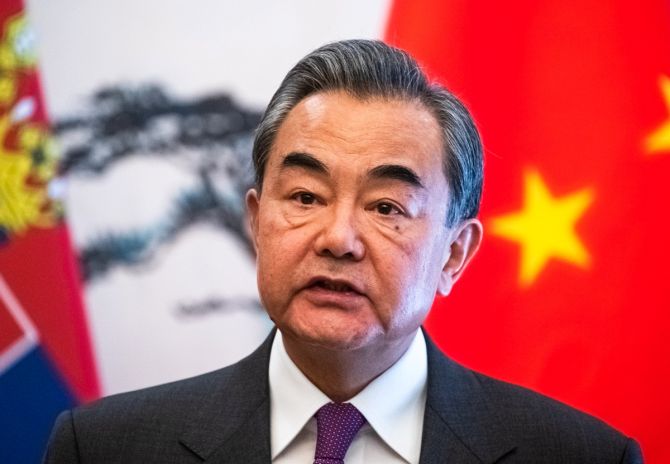 The Ministry of External Affairs (MEA) said China and other countries have no locus standi to comment on Jammu and Kashmir and they should note that India refrains from public judgment of their internal issues, in what is seen as a strong reaction and message to Beijing.

The MEA's reaction came in the midst of contacts between New Delhi and Beijing over a possible visit by Wang to India going down to the wire with neither side giving any clarity on the proposed trip.

Bagchi said matters related to the Union Territory of Jammu and Kashmir are 'entirely' internal affairs of India.

"Other countries including China have no locus standi to comment. They should note that India refrains from public judgement of their internal issues," he said.

Bagchi was responding to media queries on the comments by Wang.

"On Kashmir, we have heard again today the calls of many of our Islamic friends. And China shares the same hope," Wang said at the OIC meeting in Islamabad.

The Chinese foreign minister began a two-day visit of Pakistan on Tuesday.

Wang addressed the opening ceremony of the session of the Council of Foreign Ministers (CFM) of the Organisation of Islamic Cooperation (OIC).

"This is the first time for China's foreign minister to participate in the OIC-CFM meeting. It fully demonstrates the sincere desire of China and the Islamic world to strengthen exchange and cooperation, and will surely lift our relations to a new level," Wang said in his address at the meeting on Tuesday.