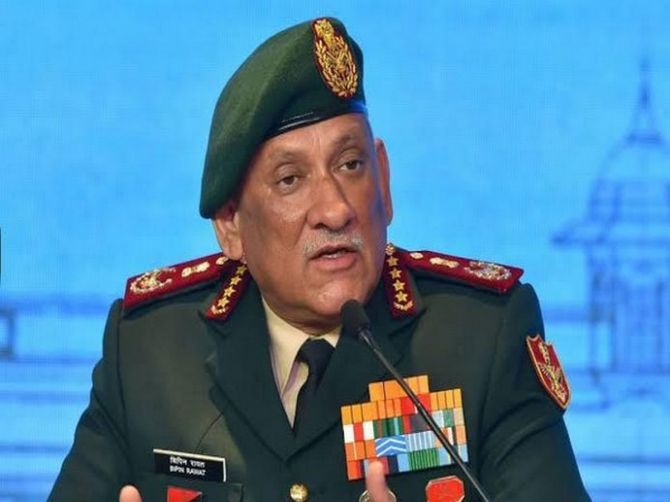 In an interactive session at the US-India Strategic Partnership Forum, Gen Rawat also asserted that India's policy of engagement in the region, if not backed by credible military power and influence, would imply acknowledging China's pre-eminence.

Gen Rawat also warned Pakistan against trying to take advantage of any possible conflict between India and China in eastern Ladakh, saying Islamabad may suffer 'heavy losses' for any 'misadventure'.

"Of late, India has been seeing some aggressive actions by China but we are capable of handling these in the best suitable ways," Gen Rawat said at the online event while mentioning laid down protocols between the two countries in maintaining peace and tranquility along the Line of Actual Control.

He said China's infra projects in Tibet Autonomous Region, including completion of a highway renovation project and development of strategic railway lines, as also recently introduced reforms in Chinese military are being monitored by India and their implications are being considered in devising a strategy for the future.

Tensions flared in eastern Ladakh after China unsuccessfully attempted to occupy Indian territory in the Southern Bank of Pangong lake four days back when the two sides were engaged in diplomatic and military talks to resolve the festering border row.

India occupied a number of strategic heights on the southern bank of Pangong lake and strengthened its presence in Finger 2 and Finger 3 areas in the region to thwart any Chinese actions in the future. China has strongly objected to India's move.

Noting that Pakistan could take advantage of India's border row with China, the Chief of Defence Staff said it may create some trouble for New Delhi on the northern border.

"Therefore, we have taken adequate precautions to ensure that any such misadventure by Pakistan is sorted and they are not able to succeed in their mission . In fact, they may suffer heavy losses should they attempt any misadventure," he said.

The Chief of Defence Staff spoke extensively about how Pakistan has been engaged in a proxy war against India and pushing terrorists into Jammu and Kashmir, and also its attempts to spread terrorism in other parts of the country.

"We have unsettled borders along the northern front and also in the western front with Pakistan. So our military will continue to be a significant factor in determining our national security.

"Our armed forces will have to be prepared to deal with immediate crisis and concurrently prepare for the future," he said.

Gen Rawat said China's economic cooperation with Pakistan in Pakistan-occupied-Kashmir along with its continued military, economic and diplomatic support requires high levels of 'preparations' by India.

"At the same time it poses the threat of coordinated action along the northern and western fronts which we have to consider in our defence planning," he said.

"Considering the threats from our northern and western borders, we have devised strategies to deal with a primary front, depending on which to consider a primary threat," he added.

Talking about India's overall security challenges, the Chief of Defence Staff said the country faces the most 'complex threats and challenges' spanning the full spectrum of conflict from 'nuclear to sub-conventional'.

"The key geo-strategic challenges emanate from the instability due to perceived misconception about nationalism often leading to conflict.

"The proxy war unleashed by Pakistan blocked India's efforts at regional integration besides fomenting terrorism against India and exploiting our diverse faultlines," he said.

On 'Quad' or Quadrilateral coalition among India, the United States, Australia and Japan, Gen Rawat said New Delhi thinks the grouping 'is a good system' to ensure freedom of navigation in the Indo-Paciifc region.