India reached out to countries on CAA, NRC: MEA

India has reached out to countries across all geographical regions to share its perspective on the Citizenship Amendment Act and the National Register of Citizens, and emphasised that they are internal matters, the ministry of external affairs said on Thursday. 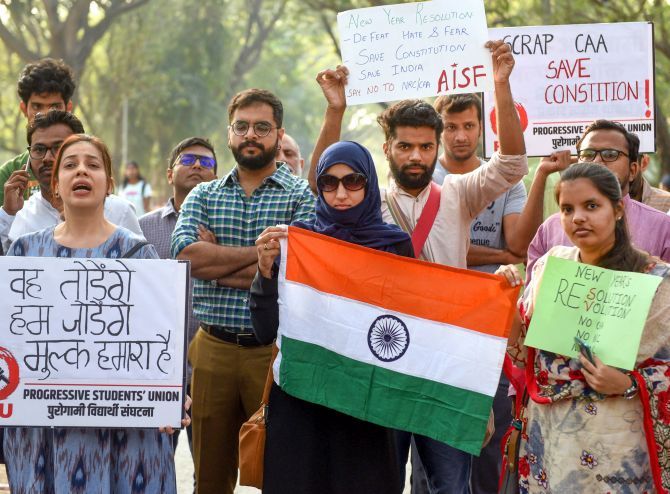 A two-pronged strategy was adopted by the ministry as apart from reaching out to a number of resident ambassadors and high commissioners based in New Delhi, Indian envoys abroad engaged with capitals in different countries, ministry of external affairs spokesperson Raveesh Kumar said.

"We did reach out to countries across all geographical regions. We did write to our missions and posts. We did tell them to share our perspectives on the CAA and the NRC to the host government," he said at a media briefing.

Kumar said under the Indian outreach three-four points were emphasised to the countries on the CAA and the NRC.

"We emphasised that the matter is internal to India. We also asked them (missions) to convey that the Act just provides expedited consideration for Indian citizenship to persecuted minorities already in India from Pakistan, Afghanistan and Bangladesh," he said.

According to the Citizenship Amendment Act, members of Hindu, Sikh, Buddhist, Jain, Parsi and Christian communities who have come from Pakistan, Bangladesh and Afghanistan till December 31, 2014 following religious persecution there will get Indian citizenship.

The Indian side also conveyed to the countries that the CAA does not affect the existing avenues which are available to other communities to seek citizenship, Kumar said, adding that it also does not seek to strip anybody of citizenship.

He said it was also conveyed that in any way the act does not alter the basic structure of the Constitution as some foreign press has portrayed.

Indian ambassadors and consul generals were asked to reach out to not only the interlocutors in the government but also to the media, Kumar said.

"On many occasions, the ministry conducts a very proactive diplomacy here in Delhi, but in this case it was realised that there is a lot of explaining that is involved and one has to go out and brief the capitals," he said.

Asked about what the Indian side briefed other countries on the NRC, Kumar said it was emphasised that the CAA and NRC are separate processes and not related.

"If you notice the reaction which we have received from across the world, barring a few countries, we feel most of the countries have accepted that this is an internal matter of India and that is what is getting reflected in their reactions and their pronouncements," the MEA spokesperson said.

When asked about reports that some countries were not apprised about the CAA, he said those reports were "factually incorrect".

On Bangladesh's reactions to the NRC, he said India has explained its position to the Bangladeshi government.

External Affairs Minister S Jaishankar, who was in the US for the 2+2 dialogue last month, had shared India's perspective on the CAA with the Senate Foreign Relations Committee's leadership in Washington.

Protests over the CAA had led to the postponement of the Indo-Japan bilateral summit last month.

The cancellation of the Japanese prime minister's trip had come a day after Bangladeshi foreign minister A K Abdul Momen and home minister Asaduzzaman Khan called off their visits to India following enactment of the controversial law.