India's drug regulator has initiated a probe and sought further details from the WHO after the global health body issued an alert that cough syrups manufactured by an Indian firm could potentially be linked to the death of children in Gambia. 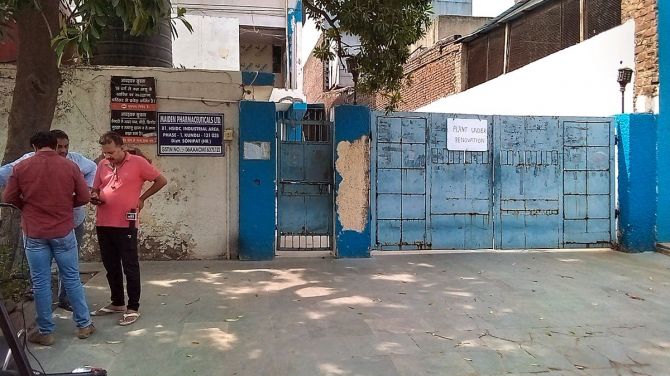 IMAGE: Maiden Pharmaceuticals Limited factory in Sonepat district, October 6, 2022. A probe has been initiated by India’s drug regulator after WHO issued an alert saying cough syrups manufactured by the Indian firm could potentially be linked to the death of children in Gambia. Photograph: PTI Photo

The World Health Organisation (WHO) on Wednesday warned that four "contaminated" and "substandard" cough syrups allegedly produced by Maiden Pharmaceuticals Limited based in Haryana's Sonepat could be the reason for the deaths in the West African nation.

Haryana's Health Minister Anil Vij on Thursday said samples of four cough syrups manufactured by the firm have been sent to the Central Drugs Laboratory in Kolkata for examination.

"The samples have been collected by a team of the DCGI and Haryana's Food and Drugs Administration Department and sent to the CDL, Kolkata for examination," Vij told PTI.

Vij said the cough syrups manufactured by the pharma company were approved for export. "It is not available for sale or marketing in the country."

"Whatever action has to be taken will be taken once the CDL report comes. Only after the report is in, we can arrive at any conclusion," Vij said.

Government sources had said the exact "one-to-one causal relation of death" has neither been provided by the UN health agency nor the details of labels and products been shared by it with the Central Drugs Standard Control Organisation (CDSCO), enabling it to confirm the identity or source of the manufacturing of the products.

"Based on available information, the CDSCO has already taken up an urgent investigation into the matter with regulatory authorities in Haryana.

"While all required steps will be taken, as a robust regulatory authority, the WHO has been requested to share with CDSCO at the earliest the report on the establishment of a causal relation to the deaths with the medical products in question, photographs of labels/products etc," a source said.

According to the sources, the WHO had on September 29 informed the Drugs Controller General of India that it was providing technical assistance and advice to Gambia.

It had highlighted that a significant contributing factor to the deaths was suspected to be the use of medicines which may have been contaminated with Diethylene Glycol/Ethylene Glycol, and said its presence had been confirmed in some of the samples it tested.

The CDSCO said it responded to the WHO within an hour-and-a-half after receiving intimation, by taking up the matter with the state regulatory authority.

A detailed investigation was launched to ascertain the facts and details into the matter in collaboration with Haryana State Drugs Controller, the source explained.

From the preliminary inquiry, it has been made out that Maiden Pharmaceutical Limited is the manufacturer licensed by the state drug controller for the products under reference, and holds manufacturing permission for these products.

"The company has manufactured and exported these products only to Gambia so far," the source said.

It is a practice that the importing country tests the products for quality before sanctioning their usage there.

According to tentative results received by WHO, out of the 23 samples tested, four samples have been found to contain Diethylene Glycol/ Ethylene Glycol as indicated.

It has also been informed by WHO that the certificate of analysis will be made available to it in near future and WHO will share it with India.

"At the same time, the exact one-to-one causal relation of death has not yet been provided by WHO, nor have the details of labels/ products been shared by WHO with CDSCO enabling it to confirm the identity/ source of the manufacturing of the products," the official source stated.