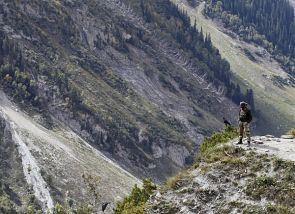 With no let up in ceasefire violations by Pakistan along the LoC and the International Border, the Indian Director General of Military Operation on Tuesday spoke to his Pakistani counterpart and is understood to have conveyed India's strong concerns over it.

As per the existing arrangement between the two countries, their DGMOs talk over hotline every Tuesday to discuss issues on the Line of Control and the International Border.

"Our DGMO called up his Pakistani counterpart and discussed the issue of ceasefire violations," an Army official said, adding New Delhi's concerns were made known to them.

This year, 136 ceasefire violations have been reported so far, the highest in the past eight years. Even on Monday, Pakistani Rangers opened fire at 10 border posts.

Since January this year, there has been tension between the two sides on the LoC after the beheading of two Indian soldiers by the Pakistan Army and terrorists supported by it.

The tensions flared up again after the killing of five Indian soldiers inside Indian territory in August this year.

The DGMO-level meeting proposed during Prime Minister Manmohan Singh's talks with his Pakistan counterpart Nawaz Sharif in the US is also likely to be put on hold in view of the escalating ceasefire violations.

Army Chief Gen Bikram Singh had also on Monday briefed Defence Minister AK Antony on the situation on the LoC and the international border and the steps taken by the force to deal with the situation.

After the increasing number of violations, Jammu and Kashmir Chief Minister Omar Abdullah said the Centre will have to look at other options if Pakistan continues to violate ceasefire.