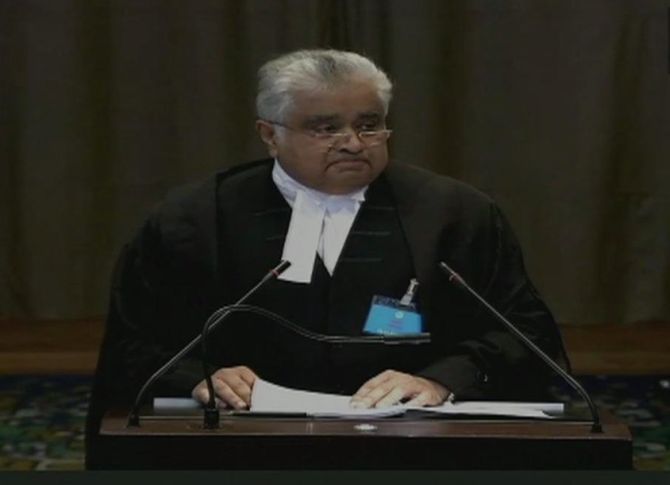 India on Wednesday questioned the functioning of Pakistan's notorious military courts and urged the International Court of Justice (ICJ) to annul Kulbhushan Jadhav's death sentence, which is based on an 'extracted confession'.

Jadhav, 48, a retired Indian Navy officer, was sentenced to death by a Pakistani military court on charges of 'espionage and terrorism' after a closed trial in April 2017. His sentencing evoked a sharp reaction in India.

"Annul the decision of the military court and restrain Pakistan from giving effect to the (death) sentence. Release Jadhav and ensure his safe passage to India.

"If not then direct a trial under normal law before civilian courts with full consular access," Deepak Mittal, Joint Secretary, the Ministry of External Affairs, told the ICJ judges.

Making the final submission in the ICJ on the third day of the hearing, Mittal requested the top United Nations court to declare that Pakistan acted in breach of Article 36 of Vienna Convention, failed to inform Jadhav of his rights and declined consular access to him.

"India requests this court to adjudge and declare that Pakistan acted in egregious breach of Article 36 of Vienna Convention," he said.

Harish Salve, who was representing India in the case, also said that the time has come for the ICJ to make Article 36 a potent weapon for protecting human rights.

Salve said Pakistan has continued to misuse the opportunity provided by the ICJ in the Jadhav case.

"Apart from showing propaganda, Jadhav has become a pawn in Pakistan's tool to divert international scrutiny from itself," Salve said in his arguments during which he mentioned the 'dastardly' terror attack in Pulwama and another in Iran last week by Pakistan-based terror groups.

He also said that Pakistan is under pressure from the Financial Action Task Force over terror financing.

He also cited Pakistan's former prime minister Nawaz Sharif's interview to a newspaper in which he acknowledged his country's role in the 2008 Mumbai attack in which 166 people were killed by 10 LeT terrorists.

"This interview has not been denied," Salve said.

On Pakistan's military courts, he said the International Commission of Jurists and European Parliament have criticised their functioning and added that anything diluting provisions of Vienna Convention must fail.

"India's criticism of military courts, the manner in which they function has been documented even by the European Parliament.

"If the military courts don't measure up to due process then domestic statutory law is irrelevant...

"Court will have to decide for itself whether it considers that such a system can be sanctified," Salve said, as he tore apart Pakistan's notorious military courts.

"Jadhav's trial was completed in 4-6 months or weeks... What happened to more than 150 people killed in the Mumbai terror attacks?" Salve asked as he raked up the Ajmal Kasab case to highlight the meaning of judicial review.

"In Kasab case, the LeT terrorist who was apprehended and caught red handed by brave police officers, the Supreme Court of India examined materials on record first-hand since it was the case of death sentence. This is called review," he said.

On Pakistan's argument that India did not provide proof of Jadhav's nationality, Salve said Pakistan had no doubt when it arrested Jadhav that he was an Indian national.

"Pakistan is aware that to be an officer of RAW (Research and Analysis Wing), the primary requirement is to be a citizen of India," he said.

He said Pakistan's claims that Jadhav was an Indian terrorist, sent by India, this is a flying leap of faith.

"Possessing a passport doesn't make you party to those offences, your role in those offences gets you conviction. Jadhav is being sent to the gallows on the basis of an extracted confession," Salve said.

"Pakistan has been reluctant to share with the world and the ICJ the judgement in which Jadhav was convicted. That judgement would show basis for conviction...

"There could no threat to existence of Pakistan if these documents are made available to India," he said, adding that he has little doubts that there was any substantive evidence of Jadhav's involvement.

Salve said three attempts made by Pakistan to derail proceedings in the ICJ have failed. He also objected to the abusive language used by Pakistan's counsel in the case.

"There was a time when the world respected Pakistan, today the world doesn't have the same respect for Pakistan in its own incarnation," Salve said, taking a dig at Pakistan's counsel Khawar Qureshi, who on Tuesday said 'he has great respect for India but not its present incarnation.'

India moved the ICJ in May 2017 for the 'egregious violation' of the provisions of the Vienna Convention by Pakistan by repeatedly denying New Delhi consular access to Jadhav.

The four-day hearing in the Jadhav case opened Monday amidst heightened tensions between India and Pakistan following one of the worst terror attacks in Jammu and Kashmir by Pakistan-based Jaish-e-Mohammad terror group that killed 41 Central Reserve Police Force soldiers.

The ICJ is expected to deliver its verdict in the summer of 2019.

India also strongly objected to the abusive language used by Pakistan's counsel at the ICJ, urging the court to draw a 'redline' to prevent its repetition.

Salve drew the court's attention to the abusive language used by Pakistan through its counsel Khawar Qureshi on the second day of the hearing.

"The language echoed in this court... perhaps this court may lay down some redlines.

"The transcript is peppered with words such as shameless, nonsense, disgraceful, arrogant... India takes exception to being addressed in this fashion in an international court. Indian culture prevents me from using similar language...

He said that the criticism of a sovereign state of the case made out of the other state must be in a language consistent with the dignity of other states, he said.

"Humpty-Dumpty has no place in this court," Salve said.

The ICJ, meanwhile, said that it has not received any evidence that the ad hoc judge for Pakistan is unable or unwilling to continue to exercise his duties in the case.

Pakistan, which presented its case on Tuesday, asked the ICJ to adjourn the case, citing the illness of its ad hoc judge Tassaduq Hussain Jillani who suffered a cardiac attack ahead of the hearing.

Islamabad submitted a request for the replacement of Pakistan's ad hoc judge.

ICJ top judge Abdulqawi Ahmed Yusuf, speaking on the appointment for an ad hoc judge for Pakistan in the case, said: "In order to clear up any misunderstandings which may have arisen, we assure both parties of the smooth running of these proceedings in accordance of the principal of equality of the parties".

He said it should be noted that once a judge ad hoc has been chosen in proceedings before the court and in the absence of any objection within the prescribed time limit, his or her appointment as a judge ad hoc in the case is confirmed by a letter of the court to the parties under article 35, paragraph 3 of the rules of court.

"Indeed, in the present case, judge ad-hoc Jillani was sent the case file and duly took part in all the previous stages of the proceedings," he said.

"He (Jillani) will receive all transcripts of oral proceedings and may also watch them by a webcast... It follows that the judge ad-hoc chosen by Pakistan for the current proceedings has been participating in the case and may continue to do so.

"Having began his duties, a judge ad-hoc serves the court like all his or her colleagues as an independent judge for the remainder of the case, including all subsequent phases, through to final judgement or until the case is otherwise removed from the general list," the ICJ top judge said.

The court has not received so far any evidence that judge ad hoc Jillani is unable or unwilling to continue to exercise his duties as a judge ad hoc in this case, he said.

ICJ top judge Yusuf said it is important to recall that even if a judge ad hoc is not able to attend the hearing, he or she may be authorised by the court to take part in the subsequent deliberations. 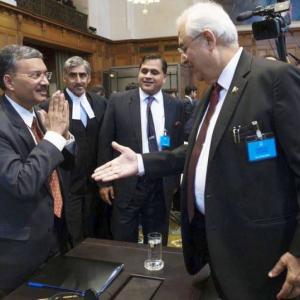