India has decided to act quickly and has already sought access to Tahawwur Rana, the Pakistani-Canadian accused in the 26/11 Mumbai terror attacks, who will go on trial in a United States court on May 16.

Sources in the home ministry and the National Investigative Agency said a request has been sent to the American authorities to interrogate Rana, and a reply was being awaited from them.

The request, which has been sent under the Mutual Legal Assistance Treaty signed between the two countries, will take at least a month to bear fruit.

India finds the need to immediately interrogate Rana since the fear is that there could be problems in case he enters into a plea bargain before the court in Chicago.

Sources said there was a chance of him doing so in order to avoid extradition. They also said the fear was that the legal process may take a long time.

Rana had made a startling revelation when he said that it was the Pakistani government and its spy agency Inter Services Intelligence which planned the 26/11 terror attacks in Mumbai, which killed 166 people.

Interestingly, he did not blame the Lashkar-e-Tayiba for the terror attack.

Sources said Rana was likely to stick to that stand before the court when the trial commences. While this would be ample documentation for India, it would still be better to interrogate him in person.

Once India gets access to Rana, the authorities would want to know the names of the Pakistani officials involved in planning the attack, and seek information about his association with arrested Pakistani American LeT operative David Headley and his local links in India.

The NIA, during its probe, has tracked Rana's movements to both the Taj Mahal and Kerala, and they believe that he may have interacted with some local people over there.

He also ran a travel agency and the NIA would like to know whether there was a point man in India for the same.

Sources, however, pointed out that his interrogation may take place only after June 16 since no direct probe could take place when the trial is on, and that it would take a month to be completed. 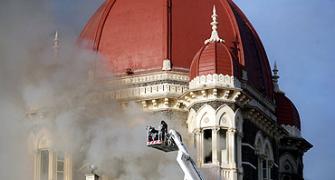 How terrorists from across the globe conspired to execute 26/11