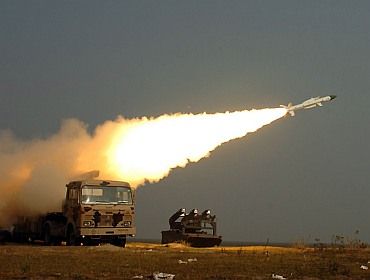 A range of retaliatory measures are being weighed by India’s generals, including attacks by ground forces on Pakistani posts, or strikes by aircraft, missiles or massed artillery guns, reports Ajai Shukla.

The Army has begun weighing its options to retaliate against Pakistani forces on the Line of Control, after their troops, employing jihadi extremists, killed and beheaded two Indian soldiers near Poonch on Monday, top generals said.

It is learnt that the incident took place when an Indian patrol of 8-10 soldiers was checking the border fence, a perilous task involving physically moving along the fence, very close to the LoC, to check that it has not been cut or its electronic sensors damaged.

According to the modus operandi of Pakistani troops on forward LoC posts, the exposed patrol first came under intense fire from automatic weapons, which Pakistani soldiers had stealthily deployed in temporary positions, just across the LoC.

With two Indian jawans injured in the firing, a ‘border action team’, comprising jihadi fighters, darted across the LoC to the border fence. Covered by the Pakistan army’s firing, the jihadis killed the two jawans, beheaded them, and returned to their side of the LoC, bearing the heads as trophies.

The employment of a BAT is a well-rehearsed Pakistani tactic that creates deniability by using jihadis to cross into the Indian side.

The employment of a BAT is a well-rehearsed Pakistani tactic that creates deniability by using jihadis to cross into the Indian side. If any jihadis are killed or captured, the Pakistan army disowns it as an infiltration attempt.

Regular soldiers remain on their side of the LoC, firing on Indian posts and patrols to cover the BAT’s move.

A range of retaliatory measures are being weighed by India’s generals, including attacks by ground forces on Pakistani posts, or strikes by aircraft, missiles or massed artillery guns.

Indian troops on Wednesday opened ‘speculative fire’ along the LoC in Jammu and Kashmir’s Poonch district.

Earlier, an Army officer had said that there was a ceasefire violation in the area and that details are being sought.

“There was no ceasefire violation along the LoC in Poonch. It was speculative fire,” an army officer of northern command said.

Speculative fire is normally used to check movement of suspicious persons along the border.

On Monday, the Army's Director General of Military Operations, Lieutenant General A K Bhatt, warned of retaliation during a phone call to his Pakistani counterpart. A defence ministry release stated: ‘The DGMO of the Indian Army conveyed that such a dastardly and inhuman act is beyond any norms of civility and merits unequivocal condemnation and response.'

Defence Minister Arun Jaitley also sounded a warning on Monday, "The country has full confidence and faith in our armed forces, which will react appropriately to this inhuman act. The sacrifice of these soldiers will not go in vain."

Last September, the Indian Army had retaliated to a jihadi strike on an army post near Uri with multiple cross-LoC ‘surgical strikes’ that are believed to have killed several jihadi fighters and a handful of Pakistani soldiers.

Even so, senior generals admit there are limitations on how much, and how often, Pakistani posts on the LoC can be punished, even in retaliating to an inhuman violation that involved mutilating Indian soldiers.

Inadequate punishment fails to deter Pakistani violations, while an excess could set off a cycle of escalation that could spiral out of control.

Moreover, the Indian military does not have a tri-service plan for immediate retaliation to such incidents.

This would involve pre-selecting Pakistan army or jihadi targets, earmarking the aircraft, missiles, guns or Special Forces to hit them and devising defensive measures for the inevitable Pakistani retaliation.

In what might be an unlinked development, the Army on Tuesday test-fired a BrahMos land-to-land missile, demonstrating what an official release described as ‘the weapon’s unmatched lethality of hitting the centre of a designated target with ‘bull’s eye’ precision’.

The BrahMos would be an important component of any concerted Indian cross-LoC strike capability.