The two countries also agreed to expeditiously consider signing an agreement on "combating international terrorism and other crimes".

Prime Minister Narendra Modi, who arrived in Bishkek last night as part of his eight-day six-nation tour to Central Asia, emphasised the need to combat terrorism and extremism which he described as a threat without borders.

"We both seek a peaceful and secure neighbourhood at a time of challenges in our region. And, we have shared interest in combating extremism and terrorism that has become a threat without borders," he said in a joint press meet along with President Almazbek Atambayev after their talks. 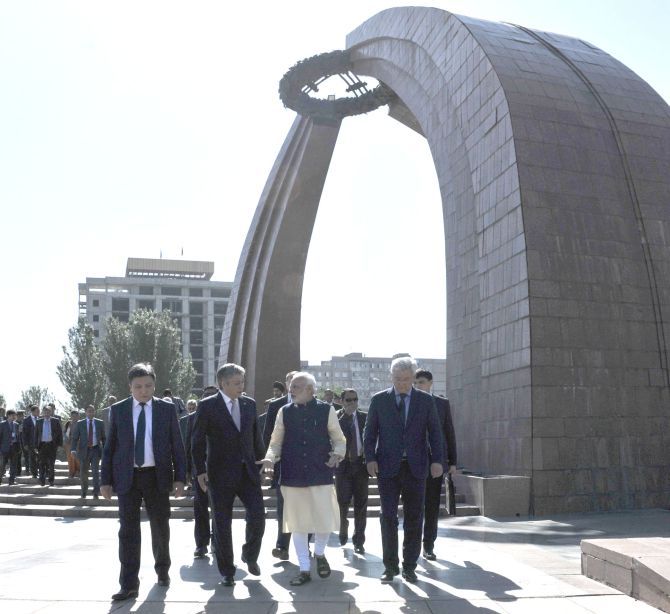 The agreements include one on defence cooperation and culture. Two MoUs were also signed for cooperation between the Election Commissions of the two countries and on cooperation in the sphere of Standards, a move that will help economic relations.

A joint statement released later said both sides "expressed grave concern at the rising trend of extremism, radicalism and terrorism in the region and whole world".

It said the Indian side highly appreciated the steps taken by the Kyrgyz government in combating terrorism and in retaining the secular character of Kyrgyz society.

"The two sides agreed to expeditiously consider signing an agreement on 'combating international terrorism and other crimes'," the statement said.

The prime minister underlined that his visit to all five countries in the region "demonstrates the importance that we attach to a new level of relationship with Central Asia. Kyrgyzstan is a key part of that vision". 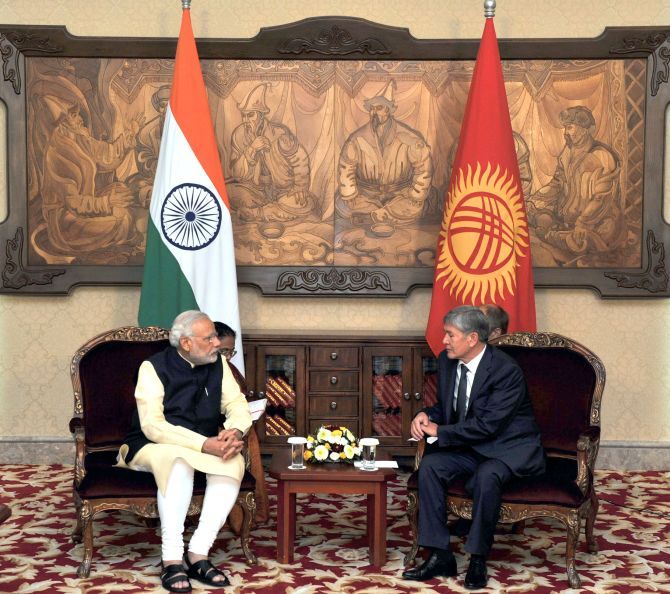 Noting that the bilateral defence ties are strong, he said a joint exercise Khanjar 2015 has just been completed.

"We have decided to hold joint military exercises on an annual basis," he said.

Modi underlined that the new agreement on defence cooperation would provide a "framework to broaden bilateral engagement" which would also include defence technology.

It also envisages conduct of joint military exercises, exchange of experience and information, and exchange of military observers and instructors besides others.

Talking about military cooperation, Modi said the IT Centre in the Kyrgyz Military Academy is an example of innovative cooperation that is important to both countries.

Observing that Kyrgystan's commitment to the United Nations Peacekeeping Missions is truly laudable, he said it is a great pleasure for India to support this effort on the strength of its long experience in this area. 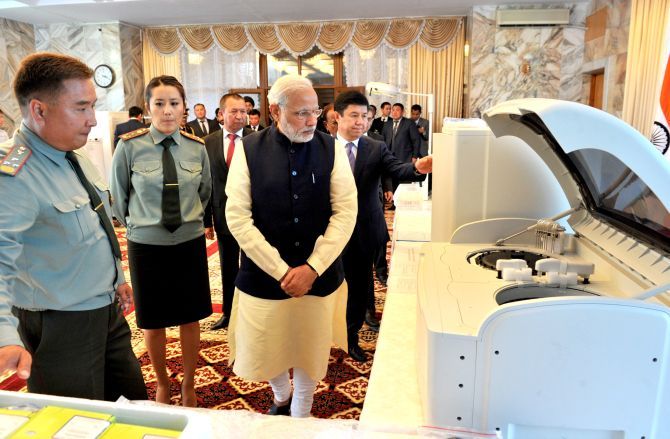 Prime Minister Narendra Modi being briefed about the gifts of medical equipment from India to Field Hospital, Kyrgyzstan, in Bishkek. Photograph: PIB

"I will have the pleasure of handing over a small contribution of field medical equipment to Kyrgyz Armed Forces," he said.

The Kyrgyz side expressed its appreciation to the Government of India for training Kyrgyz military officers for conducting various UN Peacekeeping courses, including by Centre for UN Peacekeeping in New Delhi, as well as for exchange of experience with Kyrgyz Armed Forces on the Level II UN Field Hospital of the General Staff of the Armed Forces of the Kyrgyz Republic.

"We can reinforce each other's economic progress. Sustainable development is important for both. We can contribute to cooperation and integration across the different regions of Asia," he said.

Modi underlined that he looks forward to the launch of the tele-medicine link with India.

"It is the first in the region. And, it tells us about the possibilities of the digital world. We will also initiate the second Phase of the Kyrgyz-India Mountain Bio-Medical Research Centre," he said. 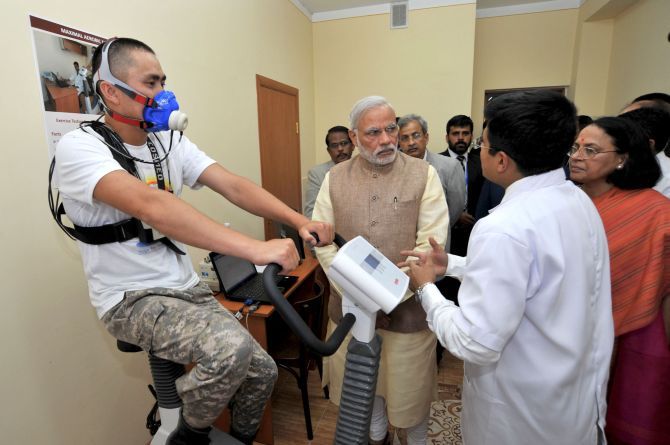 Noting that the current level of economic, trade and investment linkages between India and Kyrgyzstan are below potential, the two sides underlined the need for concerted efforts to enhance the economic content of the bilateral partnership.

Exchanging opinions on integration process in the Eurasian space, both sides agreed to work together for early conclusion of a Free Trade Agreement between the member states of Eurasia Economic Union and India.

Attaching great importance to further enhancing economic cooperation, the Kyrgyz side invited Indian businesses to invest actively in the country's economy and expressed its willingness to render assistance to the Indian investors in their investment activities in the Kyrgyz Republic.

The Kyrgyz side welcomed the interest of Indian companies to invest in mining and pharmaceutical sectors in Kyrgyzstan. 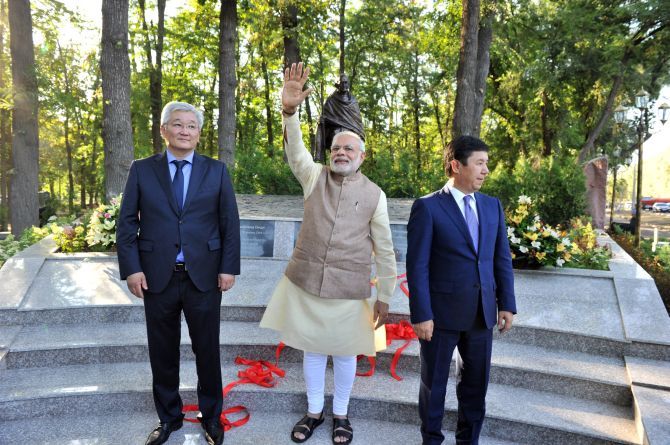 Prime Minister Narendra Modi at the ceremony to unveil the Statute of Mahatma Gandhi, at Mahatma Gandhi Avenue, in Bishkek, Kyrgyzstan. Photograph: PIB

Admiring President Atambaev's contribution to democracy and development, Modi said he had very enriching discussion with him and deeply appreciated his commitment to the relationship.

"We spoke at length about strengthening our relations in trade, investment, tourism, culture and human resource development," he said.

Modi said he was delighted that Election Commissions of both countries have signed a pact on cooperation in modern system and technologies and issues of election administration.

He said India looks forward to the visit of a Kyrgyz Parliamentary delegation to India after the parliamentary elections in the Kyrgyz Republic.

"I welcome the agreements on Standards and on Culture today. The connectivity initiative between India and Central Asia will further boost our economic ties," he said.

The prime minister said both countries will enhance engagement in capacity building and increase the training offers for Kyrgyzstan to 100 this year. Prime Minister Modi interacting with the people after unveiling the Statute of Mahatma Gandhi, at Mahatma Gandhi Avenue, in Bishkek, Kyrgyzstan. Photograph: PIB

"I am pleased that we have established a India-Kyrgyz Centre for Information Technology  in the Kyrgyz State University in Bishkek," he said, adding that India would be pleased to set up similar centres in other major cities in Kyrgyzstan.

Information technology is critical for success in this age and for creating opportunities for the youth, he added.

The two countries welcomed the commencement of direct flights between Bishkek and Delhi and agreed to encourage greater connectivity in order to enhance trade and tourism between the two countries.

The sides called to facilitate the establishment of direct business contacts.

The Indian side offered to share experience in agro-processing, greenhouse technology, water conservation, and agricultural research in order to enhance productivity and add value to agricultural produce.

The Kyrgyz side expressed its appreciation to the Indian side for its willingness to consider financing important socio-economic projects of the Kyrgyz Republic on mutually beneficial and acceptable terms.

Kyrgyzstan remains one of the popular destinations forthe Indian medical students. Students from Kyrgyzstan study in India as well and over 1000 working professionals from a cross section of the Kyrgyz society have utilised the Indian Technical and Economic Cooperation programme.

The Kyrgyz side welcomed India's decision to increase the number of ITEC slots for Kyrgyz nationals from 85 to 100 this year.

The two expressed satisfaction at the successful functioning of the India-Kyrgyz Centre for IT established in the Kyrgyz State University of Construction, Transport and Architecture named after N Isanov in Bishkek. 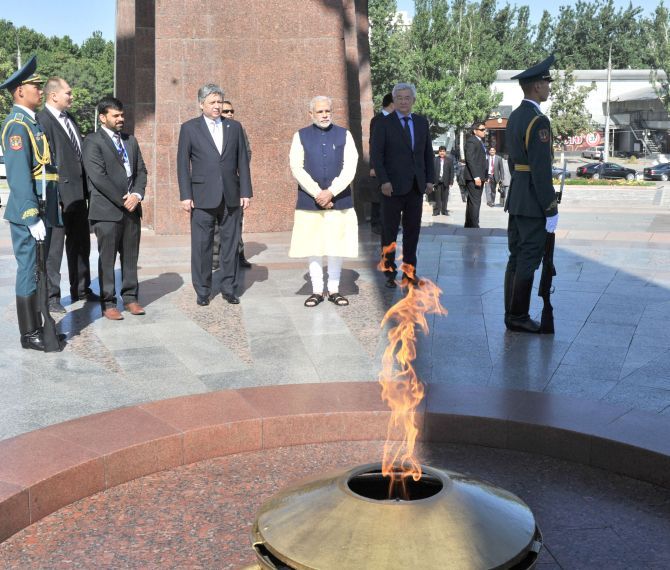 Prime Minister Narendra Modi laying the wreath to pay homage to the martyrs, at the Victory Monument. Photograph: PIB

They agreed to work towards upgrading the Centre and consider setting up of similar Centres in other major cities in Kyrgyzstan under Indian grant assistance.

Both countries expressed satisfaction over growing links in the health sector, including regular visits by doctors from super-speciality hospitals in India to Kyrgyzstan, visits of patients from Kyrgyzstan to India for medical treatment and complex surgery at affordable cost and international standards, and the gifting of a Computed Tomography Machine to the National Center for Cardiology and Internal Medicine by India in September 2014.

Both leaders welcomed the launch of project to establish Tele-medicine links, with the support of India, between highly specialised hospitals of India and six medical establishments of Kyrgyzstan.

Indian side highly appreciated the support extended by the Kyrgyz Republic to the Kyrgyz-India Mountain Bio-medical Research Center.

"The sides agreed to continue the research activity and welcomed commencement of the second phase during the visit of Prime Minister Narendra Modi," the joint statement said.

Modi appreciated the decision of the Kyrgyz side to install a statue of Mahatma Gandhi in Bishkek city, which was ceremoniously unveiled by him.

India thanked the Kyrgyz side for co-sponsoring the resolution in the UN General Assembly about celebration of 21st June as International Yoga Day.

Both leaders instructed relevant departments to put in place a liberal visa regime for a few categories of citizens to promote business and tourism between the two countries.

The prime minister also invited Atambaev to visit India, which he gracefully accepted.