The first ever mid-air refuelling of the indigenously developed light combat aircraft Tejas was successfully carried out on Monday, placing India in an elite group of countries having air-to-air refuelling system for military planes, Hindustan Aeronautics Ltd said. 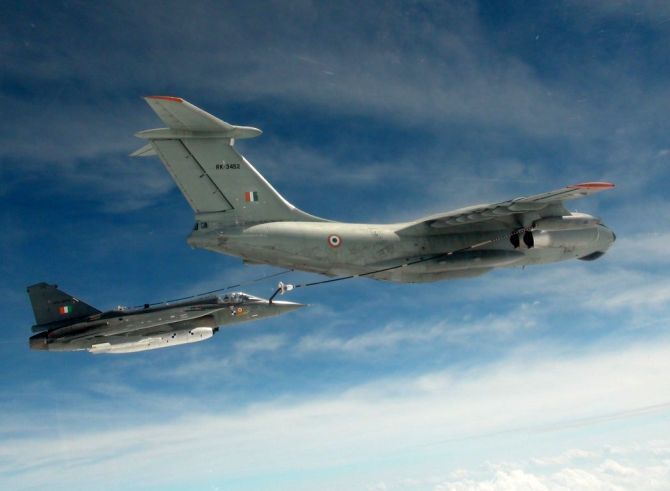 The milestone was achieved at 9.30 am when 1,900 kg of fuel was transferred from the mid-air refuelling tanker of IAF's IL78 to the Tejas LSP8 at an altitude of 20,000 feet, said a release from HAL, which has developed the light combat aircraft.

The feat was achieved days after the Indian Air Force successfully did a dry run of mid-air refuelling using the Russian-built IL-78 MKI tanker.

According to the HAL, the speed of Tejas was 270 knots when all the internal tanks and drop tanks were refuelled.

"With this, India joins an elite group of countries who have developed the Air-to-Air (AAR) (refuelling) system for military class of aircraft," HAL Chairman and Managing Director R Madhavan was quoted as saying in the release.

Successful 'dry' docking of aerial refuelling probe with the mother tanker was carried out on September 4 and 6, he said. HAL officials said in the dry docking no fuel was transferred.

The mid-air refuelling of Tejas came three months after it successfully fired an air-to-air beyond visual range missile.

The IAF had ordered 40 Tejas Mark-1 version and a request for proposal was issued to HAL by the IAF in December for procurement of another batch of 83 Tejas at a cost of around Rs 50,000 crore.