India has flattened its Covid-19 graph and 146 districts have reported no new case of the viral disease in the last seven days, 18 in 14 days, six in 21 days and 21 districts in the last 28 days, Union Health Minister Harsh Vardhan said on Thursday. 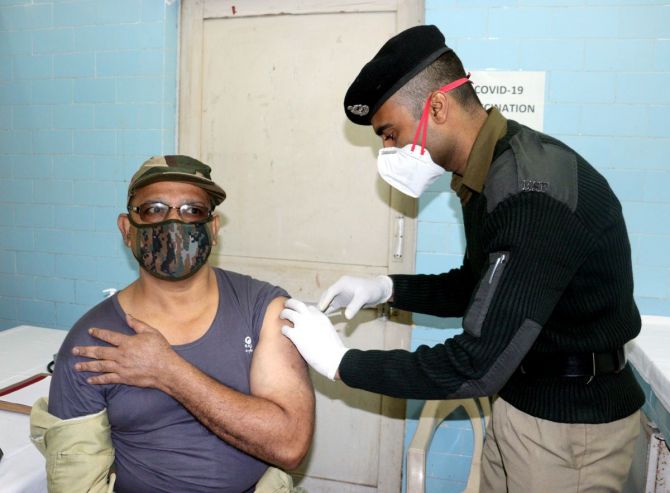 IMAGE: A BSF Jawan being given a jab of the vaccine against Covid-19 at Paloura campus in Jammu. Photograph: Shilpa Thakur / ANI Photo.

This has been achieved due to proactive testing, with more than 19.5 crore Covid-19 tests conducted in the country so far, Vardhan, who chaired the 23rd meeting of the high-level group of ministers (GoM) on Covid-19 through video conference, said, according to a statement issued by the health ministry.

The current testing capacity is 12 lakh tests per day, the minister added.

"With the 'whole of government' and 'whole-of-society' approach envisaged by Prime Minister Narendra Modiji, India has successfully contained the pandemic. Less than 12,000 cases were reported in the last 24 hours and the active caseload has reduced to just 1.73 lakh," he said.

The minister stated that 165 cases of a new UK variant of the virus have so far been reported in the country and the patients are kept under supervised quarantine and surveillance.

India has flattened its Covid-19 graph, he said.

A total of 146 districts across the country have no new cases for the last seven days, 18 for the last 14 days, six for 21 days and 21 districts have not reported fresh cases of the coronavirus infection in the last 28 days, Vardhan said.

The health minister mentioned with pride that India has supported other countries with the supply of the Covid-19 vaccines during this global public health crisis and trained the personnel of several nations in vaccine administration.

"By being a 'mitra' to the global community, India has earned global trust by supplying indigenously made vaccines at this crucial hour," he was quoted as saying in the statement.

Dr Sujeet K Singh, director, National Centre for Disease Control (NCDC), presented a detailed report on the current and future scenario of Covid-19 in India, drawing a comparison with the trajectory of the confirmed cases and growth rates of the viral disease in other countries.

India has reported a seven-day growth rate of 0.90 per cent, amongst the lowest in the world, he stated.

Singh presented a granular analysis of the trajectory of the pandemic in India, pointing towards critical parameters like day-wise confirmed new cases with the growth rate, recovery rate, case-positivity rate, trend of active cases, concentration of cases in particular districts and other trends such as fatality and the spread of the new UK-variant cases across different states.

India's case fatality ratio is showing a declining trend from 3.4 per cent in mid-June 2020 to the current rate of 1.4 per cent due to effective clinical management, he said.

The NCDC director also informed that Dadra and Nagar Haveli and Daman and Diu have the highest recovery rate of 99.79 per cent, followed by Arunachal Pradesh (99.58 per cent) and Odisha (99.07 per cent), while Kerala has a recovery rate of 91.61 per cent because of its present high active caseload.

He added that Mumbai, Thiruvananthapuram, Ernakulam, Kottayam and Kozhikode are the top five districts in the country currently in terms of reporting the highest number of active cases.

Maharashtra and Kerala account for 70 per cent of the active cases in India at the moment, Singh said.

He advised caution in the coming months, based on the nature of the transmission of the virus being witnessed in other countries and due to its mutant strain being reported throughout the world.

Through a detailed presentation, Dr Vinod K Paul, member (health), NITI Aayog, and Rajesh Bhushan, Union health secretary, apprised the GoM of the progress of the development of vaccines in the country and the vaccination drive launched by the prime minister on January 16, the statement said.

The health secretary showcased the logistics of the vaccination exercise and the gains made so far. He said over 1.12 crore doses of the vaccines were distributed among the states and Union territories within three days (from January 12-14) prior to the start of the exercise and an additional 1.15 crore doses were supplied to the states and Union territories by January 20.

Dr Paul informed that India currently occupies the sixth spot in the world in providing vaccination coverage and will move to the third place in the next few days.

He said 16 AEFI hospitalisations out of 23 lakh vaccinations so far translate to just 0.0007 per cent with no case of severe or serious AEFI or death due to vaccination reported so far.