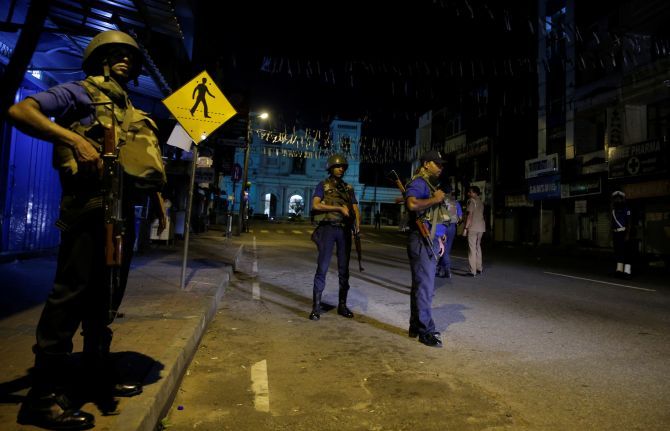 IMAGE: Security forces stand guard at St Antony shrine, days after a string of suicide bomb attacks on churches and luxury hotels across the island on Easter Sunday, in Colombo, on Wednesday. Photograph: Thomas Peter/Reuters

Intelligence inputs regarding a possible terror attack in Sri Lanka were shared by Indian agencies with their Sri Lankan counterparts earlier this month after the National Investigation Agency completed its probe into an Islamic State-inspired module planning to kill prominent leaders in South India, officials said in New Delhi.

The input was sent through diplomatic channels to the island nation after a through investigation pertaining to the IS case in Coimbatore was carried out by the NIA, which has filed a charge sheet against seven people.

During investigation, the probe team had stumbled upon videos of National Thowheed Jamaat (NTJ) leader Zahran Hashim, which was indicative of a terror attack on the Indian High Commission in Colombo.

After further investigation which included cyber trailing of some of the accounts associated with the ISIS, the central security agencies shared an input with their Lankan counterparts about the churches being the likely target of the ISIS module, they said.

Over 350 people were killed in Sunday's serial blasts at churches and hotels.

The arrested accused, who have been charge-sheeted since then, include Mohamed Ashiq A, Ismail S, Samsudeen, Mohammed Salauddin S, Jafar Shadik Ali and Shahul Hameed.

The case was originally registered at B3 Variety Hall Police Station, Coimbatore City on September 1 last year and pertained to the criminal conspiracy hatched by the accused with the intention of furthering the objectives of the proscribed terrorist organisation ISIS by targeting Hindu leaders and activists, who are critical of religious terrorism.

The NIA investigation showed that the arrested persons had got radicalised on the violent extremist ideology of the IS and they had been propagating the same ideology over the social media.

The accused in Coimbatore case were in touch with Hashim for being enrolled in the Islamic State.

Though the investigation in the case are complete, the officials did not rule out the possibility of questioning all the six accused again in case some evidence suggested that they had any knowledge about the blasts in Sri Lanka.

The Sri Lankan government came under attack on Wednesday for its inaction against radical preachers in the country with a mosque official in Colombo saying he had repeatedly warned authorities, including on the activities of the alleged mastermind of the deadly suicide attacks.

Suicide bombers, the majority of them from well-to-do families and believed to be members of a little-known Islamist extremist group -- the National Tawheed Jamath -- carried out the series of devastating blasts that tore through three churches and luxury hotels in Sri Lanka.

Reyyaz Salley, chairman of the Shaikh Usman Waliyullah mosque in Colombo said he had repeatedly attempted to warn the government about radical preachers in Sri Lanka, including Zahran Hashim, the alleged mastermind of the attacks.

In February 2019, Salley sent police and intelligence officials videos that Hashim made, which Salley considered promoting jihad. He urged them to act upon it.

"People have been brainwashed. He was talking about jihad. These are all very dangerous messages for the country," he told CNN.

"If the authorities had taken our advice this could have been prevented," he said.

Some of the attackers in the bombings had previously been arrested, State Defense Minister Ruwan Wijewardene told journalists at a press conference on Wednesday.

"Some of them, in earlier incidents, had been taken into custody (following) small skirmishes, but nothing of this magnitude," he said.

Wijewardene said that the majority of Sunday's suicide bombers were from well-heeled families. They were also well-educated, including at least university graduate who had studied abroad.

"Most of them are well-educated, and come from maybe middle- or upper-middle-class. So they are financially quite independent and their families are quite stable financially," he said.

"We believe that one of the suicide bombers studied in the United Kingdom and maybe later on did his post-graduate in Australia, before coming back to settle in Sri Lanka," he said.

Police say they have identified eight out of nine attackers -- one of whom is believed to have been a woman -- with no foreigners among them.

Authorities say they are looking into possible links between the locals who carried out the suicide bombings and the Islamic State group.