The High Commission of India in London has condemned false assertions in a "distinctly one-sided discussion" among a group of British parliamentarians on Monday on the issue of peaceful protests and press freedoms in India, amidst the ongoing farmers' stir against three new laws on agricultural reforms. 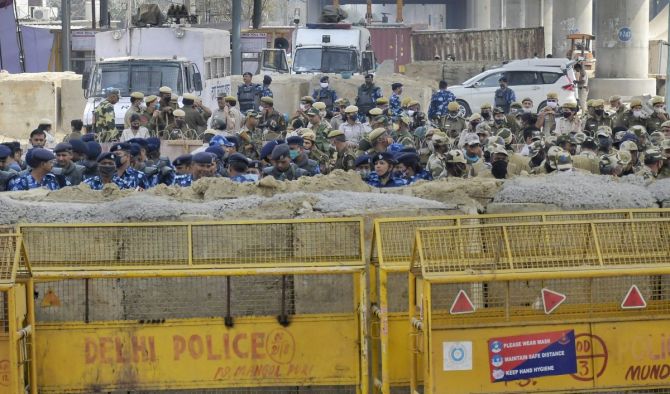 The Indian mission pointed out that foreign media, including British media, had been present and witnessed the events surrounding the farmers' protests in India first-hand and therefore any "question of lack of freedom of the media in India does not arise”.

"We deeply regret that rather than a balanced debate, false assertions – without substantiation or facts – were made, casting aspersions on the largest functioning democracy in the world and its institutions,” a statement issued by the high commission said, following the debate which stemmed from an e-petition that attracted over 100,000 signatures on the parliamentary website.

The mission said it would normally refrain from commenting on an internal discussion involving a small group of honourable parliamentarians in a limited quorum.

"However, when aspersions are cast on India by anyone, irrespective of their claims of friendship and love for India or domestic political compulsions, there is a need to set the record straight," the statement said.

It said that a false narrative over farmers' protest was sought to be developed even though “the High Commission of India has been, over a period of time, taking care to inform all concerned about the issues raised in the petition.”

The statement followed a group of around dozen cross-party British MPs debating issues around the “use of force” against protesters opposed to agricultural reforms in India and journalists being targeted while covering the protests taking place at several border points of Delhi for over 100 days.

Farmers, mostly from Punjab, Haryana and western Uttar Pradesh, have been camping at several Delhi border points, including Tikri, Singhu and Ghazipur, since November 28, demanding a complete repeal of the three farm laws and a legal guarantee on the minimum support price for their crops.

As the UK government minister deputed to respond to the debate, Foreign, Commonwealth and Development Office (FCDO) minister Nigel Adams said the close UK-India relationship did not hinder the UK in any way from raising "difficult issues" with India, even as he reiterated the government line that agricultural reforms are a "domestic matter" for India.

“This is a time of great ambition for the UK's relationship with India. Both governments are working to advance shared priorities across trade and investment, health, sustainability and climate change and defence and security,” said Adams.

“We are also working with India as a force for good in the UN Security Council and as one of the Prime Minister's [Boris Johnson] guest countries at the G7 summit later this year in June. This cooperation will help us fix global problems and it will strengthen prosperity and wellbeing in India and the UK," he said.

"However, whilst this is an exciting time for the UK-India partnership, it does not hinder us from raising difficult issues,” the minister said, adding that “candid discussions” on a range of issues will form part of Boris Johnson's planned visit to India in the coming months.

While the minister acknowledged the “alarm and uncertainty” the farmers' protests and their coverage in India had caused among British communities with family ties in India, he expressed hope that the ongoing dialogue between the Indian government and farmers' unions will have positive results.

“Both sides need to step back and recognise the need to come to an agreement… I hope the government will commit to helping that cause and offer British skills in a negotiation and compromise to help both sides to bring this issue to a close,” said Virendra Sharma, Opposition Labour MP for Ealing Southall in west London with a large Punjabi diaspora.

The debate, held in a hybrid form with some MPs participating via videolink in a room at Portcullis House in London, related to the e-petition entitled “Urge the Indian Government to ensure safety of protesters & press freedom”.

From the ruling Conservative Party backbenches, Theresa Villiers noted that agricultural reform is an issue that has proved difficult across the world over the years and pointed out that the new agricultural laws in India had been postponed to allow for greater “consultation and discussion”.

“I understand that protesting farmers feel insecure about their future, but Prime Minister Modi's government has repeatedly said that a core purpose of the reforms is to make farming more profitable, to raise the incomes of people who work in farming and to promote investment in agriculture to increase yields,” she said.

“I hear the concerns expressed about the response to the protests, but when thousands and thousands of people are involved in demonstrations and encampments lasting months and months, no policing response can altogether avoid controversial episodes,” she said.

The Indian government has denied allegations that it was trying to put an end to the minimum support price and the mandi system.

Multiple rounds of talks between the government and farmer unions have not been able to resolve the deadlock.

India has emphasised that the protests by farmers must be seen in the context of India's democratic ethos and polity and the Ministry of External Affairs said that some vested interest groups have tried to mobilise international support against the country.

"Before rushing to comment on such matters, we would urge that the facts be ascertained, and a proper understanding of the issues at hand be undertaken," it said last month.