Indian and Chinese militaries on Tuesday held an over 10-hour Corps Commander-level dialogue with a focus on finalising modalities for the disengagement of troops from various standoff points in eastern Ladakh, and explored ways to ease tension in the region, government sources said. 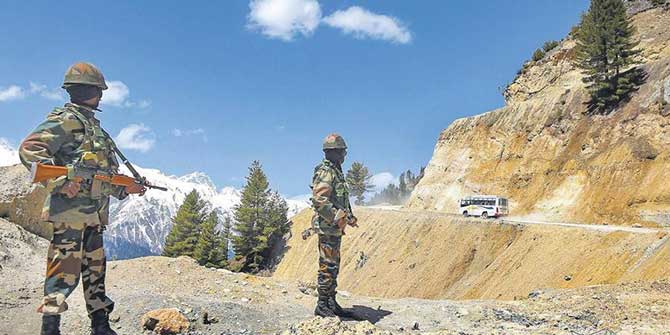 In the meeting, the Indian delegation conveyed concerns over China's "new claim lines" in the region and demanded restoration of status quo ante as well as immediate withdrawal of Chinese troops from Galwan Valley, Pangong Tso and a number of other areas, they said.

The talks took place on the Indian side of Line of Actual Control in Chushul sector in eastern Ladakh.

The meeting began at 11 am and was continuing beyond 9 pm, the sources said.

The Indian delegation at the meeting was headed by 14 Corps Commander Lt Gen Harinder Singh while the Chinese side was led by the Commander of the Tibet Military District Major General Liu Lin.

The sources said the Indian side also pitched for strictly following provisions of a number of agreements on dealing with issues relating to handling of border issues.

The focus of the talks was on finalising the modalities for de-escalation, and disengagement of troops from various friction points, the sources said adding there were deliberations on confidence building measures as well.

There was no official word on details of the meeting. It was the third corps commander-level meeting since the standoff began on May 5.

In the previous two rounds of talks, the Indian side demanded immediate withdrawal of Chinese troops from various areas in the region.

The Indian and Chinese armies are locked in a bitter standoff in multiple locations in eastern Ladakh for the last seven weeks, and the tension escalated manifold after 20 Indian soldiers were killed in a violent clash in Galwan Valley on June 15. The Chinese side also suffered casualties but it is yet to give out the details.

In the talks on June 22, the two sides arrived at a "mutual consensus" to "disengage" from all the friction points in eastern Ladakh. The previous two rounds of dialogue took place at Moldo on the Chinese side of the LAC.

Following the Galwan Valley incident, the government has given the armed forces "full freedom" to give a "befitting" response to any Chinese misadventure along the LAC, the 3,500-km de-facto border.

The army has sent thousands of additional troops to forward locations along the border in the last two weeks.

The IAF has also moved air defence systems as well as a sizeable number of its frontline combat jets and attack helicopters to several key air bases.

In a strongly-worded statement, the external affairs ministry last week held China responsible for the standoff, saying it has has been amassing a large contingent of troops and armaments along the LAC since early May and that conduct of the Chinese forces is in complete disregard of all mutually agreed norms.

Tensions had escalated in eastern Ladakh after around 250 Chinese and Indian soldiers were engaged in a violent face-off on May 5 and 6.