India and China are respecting bilateral pacts to maintain peace and tranquillity along the border, Defence Minister Rajnath Singh said in Lok Sabha on Wednesday, as he sought to assuage the opposition's concerns over incidents of Chinese troops entering Indian territory. 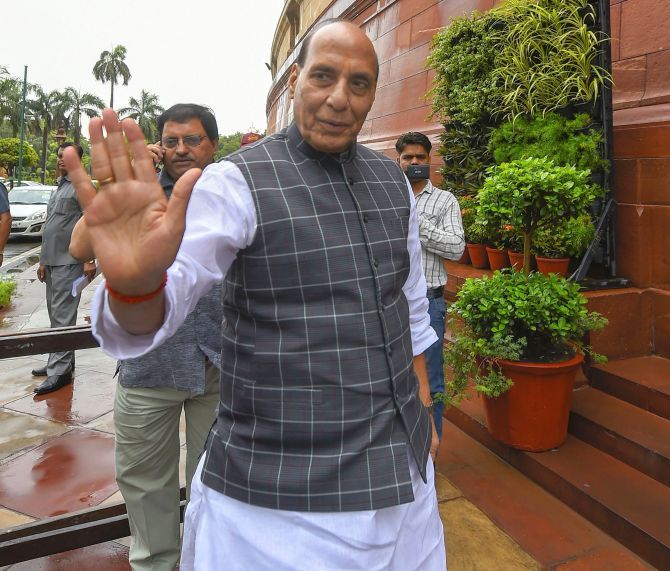 Both countries have put in a mechanism in place to control incidents of incursions and transgressions, he said.

Making a statement on the prevailing situation along the Sino-Indian border, Singh said there is complete restraint by armed forces of India and China at Doklam following months long stand-off between them in 2017.

The defence minister said Prime Minister Narendra Modi and Chinese President Xi Jinping had an informal summit meeting at Wuhan where it was decided that peace and tranquillity will be maintained at the border.

Singh's statement came after Leader of the Congress Adhir Ranjan Chowdhary raised the issue of Chinese troops entering over six km in Demchok in Ladakh.

He said China has often been transgressing into India and follows it up with aggressive diplomacy.

The defence minister wondered as to why the Congress leader raised the issue in the House and asserted that the Union government is very much aware of the situation on India's border and periodically reviews it.

The government has focused on building infrastructure, like tunnels, roads, railway lines and air fields, along the Indo-China border, he said.

Both governments, Singh said, periodically engage at different levels, including meetings between their NSAs and join-secretary-rank officials, he said.

Following the Wuhan meeting, they have also issued strategic guidance to their armies, he said.

"India and China are respecting bilateral pacts to ensure peace and tranquillity along border," he said.

Peace has mostly prevailed along the border but differences in the two countries' perceptions about the position of the Line of Actual Control has caused unsavoury incidents at times, he said.

It has been happening since 1962, he said, referring to the Indo-China war.

Biju Janata Dal's B Mehtab stressed on the need to back the government on the issue and also its foreign policy.

The House should extend full support to Prime Minister Narendra Modi in one voice, he said.