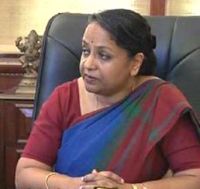 Acting tough, India on Monday called off foreign secretary-level talks with Pakistan next week and conveyed a blunt message that it was interfering in India's internal affairs by holding talks with Kashmiri separatists which was "unacceptable".

Upset that despite being firmly told by Foreign Secretary Sujatha Singh that Pakistan has to choose between "India or separatists" for talks, its top envoy went ahead with the meeting, India said, "Therefore, under the present circumstances,...no useful purpose will be served by the Indian foreign secretary going to Islamabad next week."

"Indian foreign secretary had conveyed to the Pakistan High Commissioner (Abdul Basit) today, in clear and unambiguous terms, that Pakistan's continued efforts to interfere in India’s internal affairs were unacceptable.

"It was underlined that the Pakistani high commissioner’s meetings with these so called leaders of the Hurriyat undermines the constructive diplomatic engagement initiated by Prime Minister Modi in May on his very first day in office," spokesperson in the External Affairs Ministry Syed Akbaruddin told PTI.

Singh was to travel to Islamabad on August 25 to hold talks with her Pakistani counterpart Aizaz Chaudhry, nearly two years after the Indo-Pak talks were stalled due to incidents along the LoC.

"At a time when serious initiatives were being undertaken by the Indian government to move bilateral ties forward, including towards the resumption of a regular dialogue process, the invitation to so-called leaders of the Hurriyat by Pakistan’s high commissioner does indeed raise questions about Pakistan’s sincerity, and shows that its negative approaches and attempts to interfere in India’s internal affairs continue unabated," the spokesperson said.

The only path available to Pakistan is to resolve outstanding issues through a peaceful bilateral dialogue within the framework and principles of the Simla Agreement and the Lahore declaration, he said.

“Therefore, under the present circumstances, it is felt that no useful purpose will be served by the Indian Foreign Secretary going to Islamabad next week. Foreign secretary's visit to Islamabad for talks on 25 August stands cancelled," the spokesperson said.

Ahead of talks in Islamabad, Basit had invited separatist leaders from Kashmir "for consultations".

Pakistan envoys have in the past too talked to separatists from Kashmir before any major diplomatic initiative with India.

However, Islamabad broke off from this tradition when Pakistan Prime Minister Nawaz Sharif visited India to attend the swearing-in ceremony of Prime Minister Narendra Modi in May this year.