India became global superpower 'due to Lord Ram': UP min 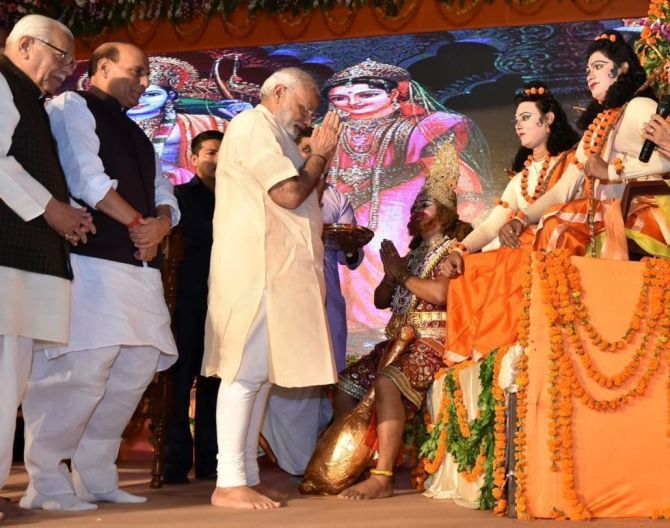 An Uttar Pradesh cabinet minister said on Monday that once a Ram temple is built in Ayodhya, it would 'restore the glorious history' of the town, asserting that the public sentiment across the country was 'in favour' of building it.

"Whether it is the government or any other institution (in the country), everyone must respect the public sentiment.

"And, the public sentiment, which is prevailing across the country, wants that the construction work of the Ram temple in Ayodhya must begin at the earliest," Laxmi Narayan Chaudhary told PTI in an interview in Lucknow.

"As soon as a grand Ram temple is built in Ayodhya, it will restore the glorious history of Ayodhya.

"Subsequently, lakhs of tourists will visit the place and it will eventually give a boost to tourism in the temple town," the state religious affairs, culture, minority welfare, Muslim waqf and Haj minister said.

Claiming that the entire world was keeping a watch over the developments, Chaudhary affirmed that the country 'owes its identity to Lord Ram'.

He said the aim of the recently-organised 'Deepotsav' in Ayodhya was to send a message across the globe that 'people should learn a lesson from the life of the Maryada Purushottam, who made India a global superpower'.

"Lord Ram is a personality, which is incomparable -- be it as a son or a warrior. Lord Ram is our role model... It was due to Lord Ram that India became a global superpower," Chaudhary said.

The minister claimed that during the Mughal rule, British rule and even after decades of Independence, no attention was paid for the development of Ayodhya.

"It was only after Yogi Adityanath became the UP chief minister that attention was paid for the beautification of Ayodhya and to enhance its grandeur.

"In the last 100 years, no work was done for development of Ayodhya and it was virtually left to its own fate," he said.

Arunav Sinha in Lucknow
© Copyright 2021 PTI. All rights reserved. Republication or redistribution of PTI content, including by framing or similar means, is expressly prohibited without the prior written consent.