In a significant victory, India got elected as Member of the United Nations Commission on the Status of Women, the principal global body focussed on gender equality and women empowerment, beating China in a hotly-contested election. 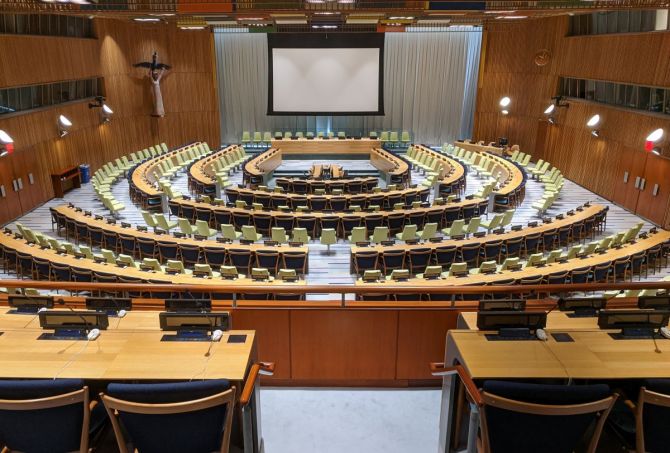 The Commission on the Status of Women (CSW) is a functional commission of the UN Economic and Social Council (ECOSOC).

The 54-member ECOSOC, holding the first plenary meeting of its 2021 session in the General Assembly Hall on Monday, held elections for two seats in the Asia-Pacific States category with Afghanistan, India and China in the fray.

Afghanistan, which is led by Ambassador Adela Raz at the UN, garnered 39 votes and India got 38 votes of the 54 ballots cast.

China, a permanent member of the UN Security Council, got only 27 votes and could not even cross the half-way mark and also failed to get the required majority of 28 votes.

'India wins seat in prestigious #ECOSOC body! India elected Member of Commission on Status of Women #CSW. It's a ringing endorsement of our commitment to promote gender equality and women's empowerment in all our endeavours.

India beat China in the hotly-contested election to the prestigious UN body in the year when the 25th anniversary of the Fourth World Conference on Women, that was held in Beijing in 1995, is being commemorated around the world.

It is highly notable and telling that China lost the election to the UN's principal global intergovernmental body exclusively dedicated to the promotion of gender equality and women empowerment when the silver jubilee anniversary of the landmark Beijing conference on women is being commemorated and of which China takes a lot of ownership on.

The election result is being seen as sending a strong signal about China's own record of women's equality and empowerment.

India's Permanent Mission to the UN worked tirelessly for the hard-fought election, reaching out and sensitising all Member States, sources said.

India and Afghanistan will join Argentina, Austria, Dominican Republic, Israel, Latvia, Nigeria, Turkey and Zambia, which were elected by acclamation, to the Commission on the Status of Women for a four-year term beginning from 2021-2025.

India's election win at the CSW is highly significant as it comes on the eve of India gearing up to sit at the UN Security Council high table as non-permanent member for a two-year term beginning January 1, 2021.

'Victory Earned! #CSW is an important normsetting organ for #Gender #Equality & #WomenEmpowerment & #India has made a significant contribution to evolving global women's human rights standards in UN including #SDG5 in Agenda 2030!' she tweeted, referring to the Sustainable Development Goal of achieving gender equality and empower all women and girls.

The Commission on the Status of Women is instrumental in promoting women's rights, documenting the reality of women's lives throughout the world, and shaping global standards on gender equality and the empowerment of women.

In 1996, ECOSOC expanded the Commission's mandate and decided that it should take a leading role in monitoring and reviewing progress and problems in the implementation of the Beijing Declaration and Platform for Action, and in mainstreaming a gender perspective in UN activities.