Bagging 49 seats out of 280, Independents emerge as key player in J-K DDC polls

Independent candidates have emerged as big winners in Jammu and Kashmir's maiden District Development Council polls, with 49 of them having been declared elected so far from 280 seats, putting them ahead of parties like the Congress and the Peoples Democratic Party. 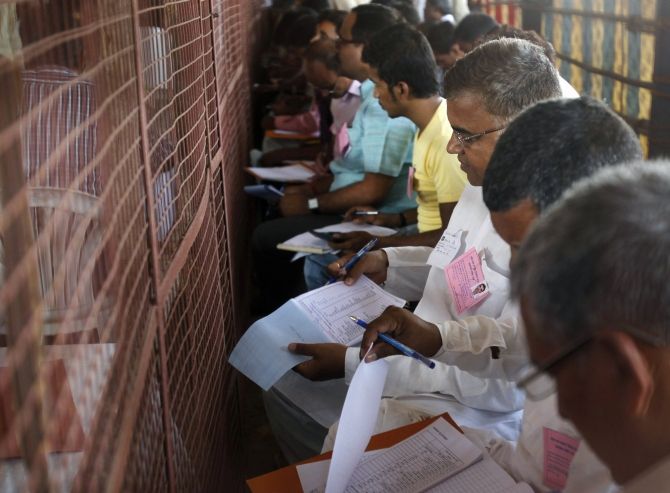 Though the BJP maintained its supremacy by emerging as the single largest party with 74 seats and is leading in another seat, the defeat of its stalwarts Choudhary and another former minister Shakti Raj Parihar, who lost from two constituencies in Doda district, has come as a shock for it.

Choudhary lost to Singh by a razor-thin margin. Singh polled 12,969 votes against Choudhary's 12958, according to the results declared by the J&K Election Commissioner in the early hours of Wednesday.

Choudhary, who originally hailed from Bhimber Tehsil in Pakistan-occupied Kashmir before his family migrated to border village Chakroi in R S Pura sector, had won Suchetgarh assembly seat for the first time in 2008 and repeated the performance for the party in 2014.

Singh expressed gratitude to his voters and said the vote for him was "against the farm laws imposed by the BJP government on the farmers of the country against their will".

"The BJP went for aggressive campaigning bringing union ministers, chief ministers and national leaders to divert the attention of the voters from the real issues facing the public," Singh, who finally prevailed after a neck-to-neck fight with the BJP leader, said.

Incidentally, this was the smallest margin win by any candidate in Jammu region, though an independent candidate won by just three votes against his National Conference rival in the Kashmir Valley, where many winners succeeded by small margins due to the low voter turnout recorded by various constituencies.

The independent candidates have won a total of 49 seats and one more is leading in another seat in Poonch district.

Another major defeat for the BJP was Parihar losing to his National Conference rival Asim Hashmi from Gundana segment and Congress opponent from Marmat seat Mushtaq Ahmad, both falling in Doda district, as the day-long counting witnessed a see-saw battle between him and his opponents.

Former MLA Shah Mohammad Tantray, who had resigned from the PDP early this year, was defeated by independent candidate Riyaaz Choudhary, who polled 3,829 votes against 2,898 by him in Loran constituency of Poonch district.

Independent candidate Avtar Singh was the luckiest among the contestants as he won by just three votes. Avtar Singh polled 246 votes against 243 by his NC rival Ali Mohammad Bhat to become the winner from Dadsara constituency in Pulwama district of south Kashmir.

From the same district, BJP's Minha Latief won by 14 votes against her PDP rival Ruqaya Bano. Lateef polled 364 votes, while Bano got 350 votes. The BJP has won three seats from the Kashmir Valley for the first time.

The winning margin in Srinagar, from where the highest number of seven independent candidates won the DDC polls, was also very low. J&K Apni Party won three DDC seats from the district followed by one each by the National Conference, BJP and J&K People's Movement.

For the rest of the winning candidates, there was three-digit margin as Mohammad Shaban Chopan (Independent) won by the highest margin of 521 votes in the district. He polled 609 against his nearest rival Mohammad Altaf Lali (Independent) who got only 88 votes.

In Jammu region which recorded a high turnout during the eight-phase DDC election, BJP's Amit Sharma recorded a win by 47 votes from Majalta segment of Udhampur district against his nearest rival Rajesh Kumar of the National Panthers Party (NPP). Sharma polled 4,215 votes and Kumar 4,168 votes.

A majority of the 14 seats in Udhampur district witnessed a neck-to-neck fight mainly between the BJP and the NPP. The BJP finally won 11 seats, the NPP two and Independent one.

Hans Raj of the Congress defeated BJP's Sanjay Kumar by 99 votes in Drabshalla-B constituency in Kishtwar district after securing 2,621 votes, while BJP's Sharda Bhau won from the highest margin of 8,880 votes against Congress rival Anuradha Sharma from Akhnoor constituency of Jammu district. Bhau polled 14,619 votes against 5,739 by Sharma.