United States President Donald Trump on Monday extolled the Taj Mahal as an 'awe-inspiring' monument which is a 'timeless testament' to the rich and diverse beauty of the Indian culture. 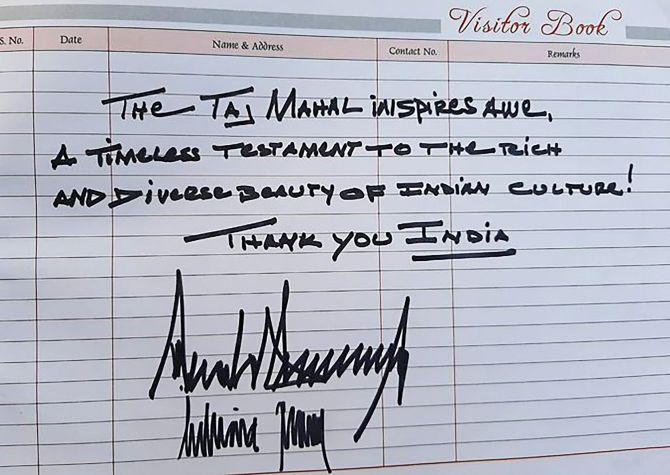 IMAGE: Words written by the US President Donald Trump on the visitors book during his tour of Taj Mahal in Agra, on Monday. Photograph: PTI Photo

He wrote the glowing words in the visitor's book of the Taj Mahal which he and his family visited in the evening during his brief visit to Agra.

Trump on his first state visit to India arrived in Agra at around 4.30 pm from Ahmedabad accompanied by his wife Melania, daughter Ivanka and son-in-law Jared Kushner and a high-level delegation.

'The Taj Mahal inspires awe, a timeless testament to the rich and diverse beauty of Indian Culture! Thank You, India,' the US President wrote in the visitors' book and jointly signed it with the First Lady.

The Uttar Pradesh government also tweeted pictures of the couple as Trump signed the book, and the comments they left behind in it.

The couple spent about an hour at the iconic Taj Mahal complex and marvelled at the famed 17th century Mughal-era mausoleum built as a monument of love.

The couple took a stroll in the resplendent gardens by the reflecting pool of the celebrated monument, holding hands as a cool breeze made their experience even more pleasant. 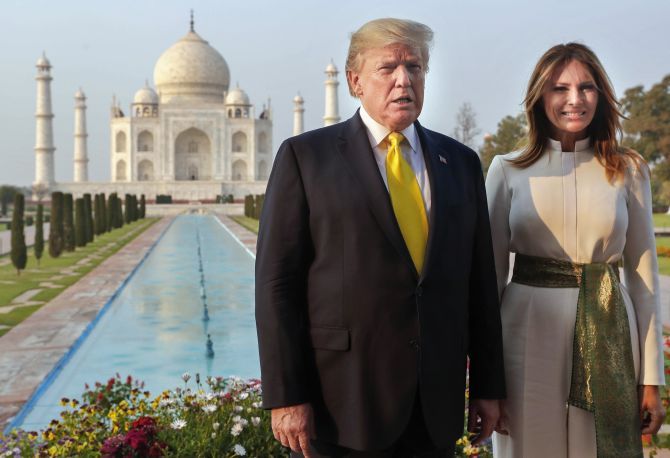 Trump and his family watched the sunset from the mausoleum before heading back to the Kheria airbase on way to Delhi.

The visit of the 45th President of the United States to Agra and Taj has generated a huge excitement among the local residents.

Some shops have even displayed their own banners, welcoming Trump to India.

Trump has now become the third head of state from America to visit the famed 17th century mausoleum in Agra, officials said.

Dwight David Eisenhower was the first US president to pay a visit to the Taj in December 1959. He had visited it along with the then prime minister Jawaharlal Nehru.

The monument was built over a period of nearly 20 years by Mughal Emperor Shah Jahan in memory of his wife Mumtaz Mahal who died in 1631.

Former US president Bill Clinton had also visited the celebrated architectural icon in 2000. He had seen it with his daughter Chelsea Clinton.

"Donald Trump is the third US president after Clinton and Eisenhower to visit the Taj. Bill Clinton had come 20 years ago and Eisenhower in 1959," said a senior official at ASI, which maintains the UNESCO world heritage site. 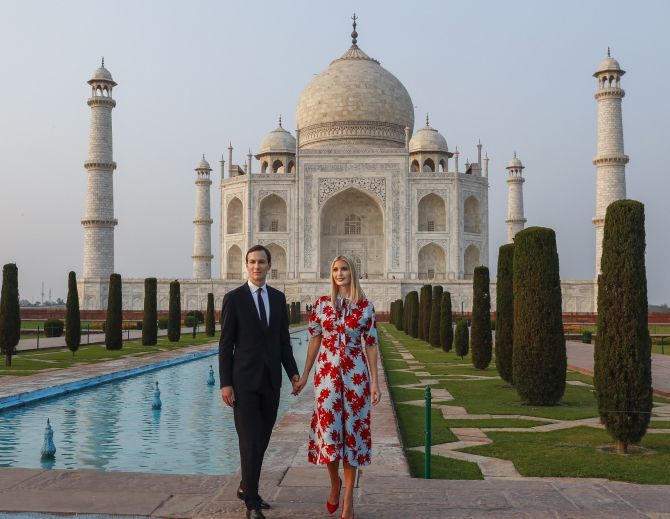 Monochrome and sepia-toned archival images show 'Ike' as Eisenhower was nicknamed, and Nehru posing for pictures against the backdrop of the Taj and reflecting pool in the front.

The celebrated landmark has been spoken about glowingly by poets, authors, historians, and featured in countless films and documentaries.

One of the most photographed sites in the world, it is always high on the itinerary of heads of states visiting India.

In 1959, Eisenhower had visited India from December 9-14 with New Delhi and Agra being on the itinerary, according to the website of the US state department.

He had met with president Rajendra Prasad and prime minister Nehru and addressed the parliament.

Clinton in 2000 had visited New Delhi, Agra, Jaipur, Hyderabad and Mumbai, between March 19 and March 25, it said.

During his visit, he had met with the then president K R Narayanan; signed a joint statement on energy and the environment; and addressed the parliament, the website said.

Taj Mahal, considered one of the seven wonders of the world, stands on the bank of Yamuna, and is maintained by the Archaeological Survey of India (ASI).

Kunal Dutt in Agra
© Copyright 2021 PTI. All rights reserved. Republication or redistribution of PTI content, including by framing or similar means, is expressly prohibited without the prior written consent.