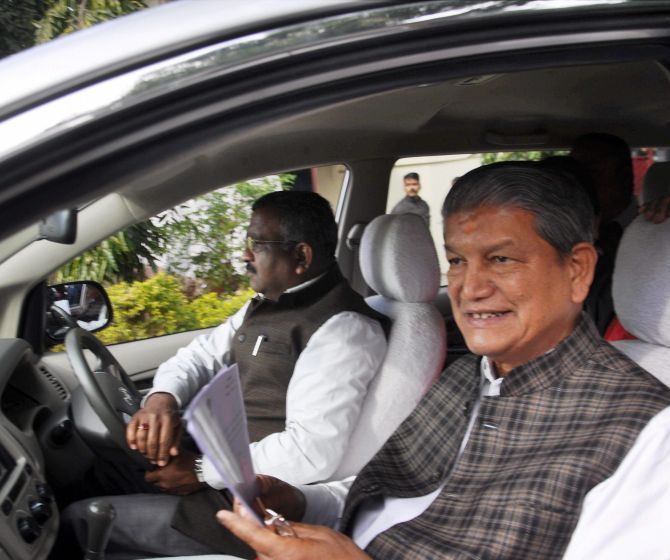 If you want to summarise the 2017 Uttarakhand assembly elections, you can say the ruling Congress has been decimated after last year’s rebellion by party MLAs. And Chief Minister Harish Rawat, who was projected as ‘Bahubali’ in the elections, also fell flat as he lost both the seats, Kitchha and Haridwar Rural, that he contested.

The enormity of BJP’s victory is so huge that it is difficult to say what went wrong with the Congress and what helped Bharatiya Janata Party to score an unprecedented win. The anti-incumbency factor was so strong against the Rawat government that the Modi wave uprooted the Congress tree completely.

Rawat is blamed largely for the debacle at the hustings. Top Congress leaders admitted the main factor that led to the party’s downfall was Rawat’s tendency to indulge in one-upmanship. First, Rawat tried to highjack the entire state Congress unit by adopting various machinations to overthrow his political opponents within the party.

The day Vijay Bahuguna became chief minister in 2012, Rawat turned up the heat to unsettle him. He even rebelled against Bahuguna and threatened to resign from the party. Instead of taking action against Rawat, the party high command rewarded him with a cabinet berth at the Centre. Soon, Rawat lobbied with Congress Vice-president Rahul Gandhi to overthrow Bahuguna in 2014.

The first blow came immediately after Rawat became the chief minister. Satpal Maharaj, a top leader of Uttarakhand, quit the party opposing the high command’s decision to bring Rawat in place of Bahuguna.

Rawat tormented his opponents by not accepting their political ambitions. His belligerence forced 11 Congress MLAs to join BJP, nine of whom scored victories on BJP tickets this time. Even state Congress President Kishore Upadhayay was at loggerheads with Rawat throughout the poll campaign. Upadhayay, who lost from Sahaspur, has blamed Rawat for his defeat as he was not allowed to contest from his home constituency of Tehri.

“I accept that there must have been loopholes in my leadership that led to the party’s dismal performance,” Rawat said after the humiliating loss.

On the other hand, BJP too faced infighting but it was not severe. Riding on the Modi wave, it has gained a three-fourths majority in the state assembly. Who will be the new chief minister? This is the million dollar question before the state BJP leaders as the party did not project any chief ministerial candidate. The strategy worked.