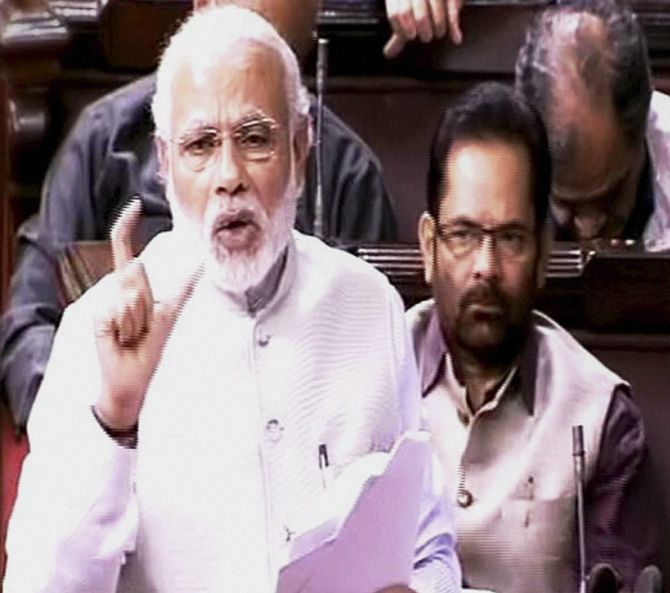 Prime Minister Narendra Modi on Wednesday made a fresh pitch for passage of Goods and Services Tax Bill and other legislations in the Rajya Sabha considering the “conducive atmosphere” that has been prevailing in Parliament this session with cooperation from the Opposition.

Like in the Lok Sabha last week, he was both conciliatory and mocking towards the Opposition, particularly Congress, during his hour long reply to the debate on the motion of thanks to the President’s address in the Upper House.

Referring to some 300 amendments that have been tabled to the motion of thanks, Modi appealed to the parties to withdraw them and passed the motion unanimously to ensure dignity of the President’s office and in keeping with the high traditions of the House.

However, despite his appeal, the government suffered an embarrassment when the House adopted the Motion of Thanks to President’s Address with an amendment moved by Leader of the Opposition Ghulam Nabi Azad in a division in which 94 voted for the amendment and 61 against.

The amendment regretted that the address did not commit support to rights of all citizens to contest Panchayat elections in the backdrop of law in Rajasthan and Haryana where matriculation has been fixed as the criteria for contesting the polls.

During his speech, Modi invoked late Prime Minister Jawaharlal Nehru’s words to say that Rajya Sabha is a chamber of ideas and there was need for coordination between it and the Lok Sabha because both of them are part of a structure.

“I hope we give importance to Pandit Nehru’s thinking and I hope all pending bills are passed in this session,” he said amid thumping of desks by the treasury benches.

The government has been having difficulties in getting through with its legislations, especially the crucial GST, because of the lack of majority in the Upper House.

Adopting a conciliatory approach, the prime minister referred to the President’s address in which the President appealed to the members to ensure smooth functioning of the Parliament and not allow disruption.

Pointing to the smooth functioning of the Houses this session, Modi said the Lok Sabha sat till midnight on Tuesday and the Rajya Sabha had a late sitting a couple of days ago.

“Even after the late sittings, the members were enthusiastic and excited. Because, after a long time, they got an opportunity to express themselves in Parliament and to put through their views across.

“The Question Hour is a good opportunity for members to keep the government, ministers and the executive on a tight leash and ensure accountability which is greatest strength of democracy,” he said.

“Now, ministers and officials are forced to make preparations for replying in Parliament. This is the strength of democracy. No words are enough to thank...,” he said.

The PM told the Congress that it was in power for long and that the National Democratic Alliance has got the opportunity now.

“Development in fits and starts is not enough. Such an approach will leave us far behind. We need to move from incremental to quantum jump,” he said.

The PM mocked the Congress for claiming ownership to the programmes of his dispensation.

In his reply, Modi pressed the need for cooperation between Lok Sabha and Rajya Sabha, considering the fact that many of the bills passed by the Lower House have got stuck in the Upper House.

“This is the Upper House. When great people move, others follow them... Whatever happens in this House (Rajya Sabha), its impact is felt on Lok Sabha, assemblies and municipal corporations. So we should think how to create an atmosphere by which democracy can be strengthened,” he said.

Modi mentioned GST and said there are many bills like this which are pending in the Rajya Sabha.

He then invoked first Prime Minister Jawaharlal Nehru to pitch for coordination between the two Houses.

“If there is no coordination and cooperation, then difficulties will increase. Nehruji had this concern.... Hope we pay attention to Nehruji”s concerns and clear all pending bills. There is a good atmosphere...By passage of the bills, the country will get momentum.”

Modi said the Opposition was welcome in criticising and finding faults, if any, in the implementation of initiatives taken by his government as he listed a number of programmes, including for farmers, youth and other sections of the society.

At the same time, he targeted Congress for claiming ownership to the schemes of his government by quoting Indira Gandhi as saying “There are two kinds of people in the world -- one who works and another who takes credit for it...You try to belong to the first category because there is little competition in it. This has been said by Indiraji.”

The PM told the Congress benches that they had got a chance for long to enjoy power and it was now BJP-led coalition’s turn to work for the country.

While noting that all governments have made some contribution, the PM said, “If we work with the attitude of ‘hota hai, chalta hai’, it will take a long time for the development of a big country like India. We need to apply full force.”

The PM, in his speech, referred to the qualification criteria fixed in BJP-ruled Rajasthan and Haryana for those contesting panchayat polls and said it has been approved by the Supreme Court but attempts are being made to give it a ‘political colour’.

“There can be difference of opinion... Some say what about those who remained illiterate,’ he said, and went on to target Congress, saying the reason for ‘illiteracy’ was the policies followed by its government after Independence.

“We want to bring any qualitative change but it is being politicised,” Modi said, daring Leader of Opposition Ghulam Nabi Azad to give 33 per cent tickets to totally illiterate people to contest the upcoming assembly elections in the five states to demonstrate Congress’ commitment in this regard.

Congress member Mani Shankar Aiyar intercepted to say that the PM has no idea how much illiteracy has increased since Independence and he is insulting the nation by his remarks.

Modi, however, was sarcastically dismissive of his comments, terming these as ‘bhule bisre geet’ (old songs) sung by someone whose membership is coming to an end.

While targeting Congress, Modi likened it to ‘death’, saying the party never gets any blame.

“Death has a blessing. It never gets blamed for anything. If somebody dies, the blame goes to reasons like cancer, age.. Death itself is never blamed or defamed.

“Sometimes I feel that Congress has this blessing. If we criticise Congress, the media terms it as ‘attack on opposition’ but not an attack on Congress. However, if we attack (JD-U leader) Sharad ji (Yadav) or BSP, then it said it is an attack on JD-U or BSP.

“Congress never gets the blame....It needs to be pondered upon as this is in itself a big science,’ he said.

Taking a dig at Azad for referring to alleged fault lines in Jan Dhan Yojana, Modi said that he was trying to find fault with a microscope.

"I thank Ghulam Nabi Azad ji. This is what opposition should do. He got the recording done of what is lacking in Jan Dhan in Bhopal. Whatever the facts be, I appreciate the effort. It shows that the opposition is vigilant.

"Had you worked so hard while you were in the government, there would have been no need for Modi to do Jan Dhan. You went out with a microscope to see where we were lacking. Had you earlier worked with binoculars, this work would not have been left for Modi," he said sarcastically.

Contending that his government's focus is on good governance and transparency, the prime minister referred to the scams like 2G spectrum during the UPA regime.

"What was the situation before our government came? All round corruption and nepotism had gripped the country. Right or wrong, the trust had gone down. The country's image had taken a beating abroad as well," he said claiming that his government was a policy driven one.

Listing the initiatives of the government on allocation of mines, spectrum and FM bandwidth, Modi also referred to a write up in Forbes magazine, which lauded the way natural resources are being auctioned in India.

"This is the way matters should be handled," the prime minister said quoting from the magazine as he reminded the Congress of the controversies surrounding the allocation of the coal mines during the UPA.

The prime minister said that the coal allocation has fetched over Rs 3 lakh crore, spectrum allocation around Rs 1 lakh crore while the auction on going for six other minerals could fetch Rs 18,000 crore.

Modi also said that over 300 projects worth Rs 15 lakh crore that were pending at various levels have been cleared by his government.

The prime minister, who has often been criticised by the opposition for "centralising" all powers in his hands, spoke at length on how his government decentralised powers.

"The third big aspect of the good governance is decentralisation. It is such a big country that you can not run through centralisation. The more you decentralise the better it will work," Modi said amid counter slogans from the opposition benches, which shouted "one-man show".

The prime minister also made a veiled reference to alleged corruption in environmental clearances when Jayanthi Natarajan was the environment minister in the UPA without naming her.

"My government has taken many steps towards decentralisation," he said disapproving of the tendency to concentrate all powers in Delhi.

"We all know what all was talked about then. Everyone knows that," he said adding that his government also increased the rights of states in granting permissions for sand mining.

Congress leader Digvijay Singh, however, countered it saying that sand mining has been a state subject.