The apex court, however, made it clear that the swearing-in and the government formation in the state would be subject to the final outcome of the case before it. 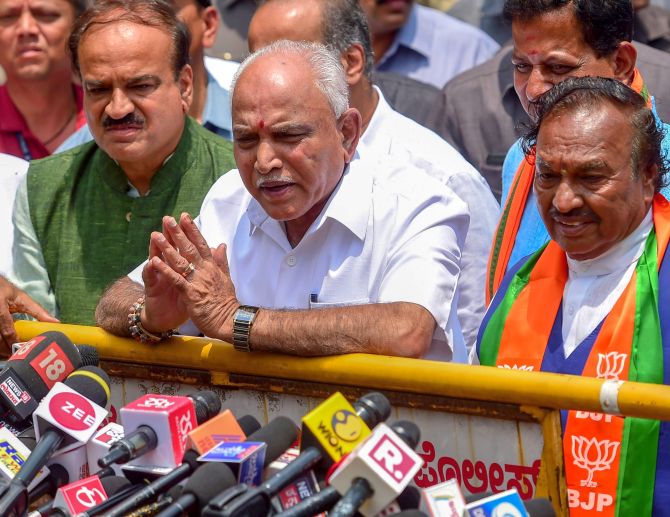 The Supreme Court on Wednesday night refused to stay Bharatiya Janata Party leader B S Yeddyurappa's swearing-in as Karnataka chief minister after a rare pre-dawn hearing which saw the Congress-Janata Dal-Secular combine making a last-ditch attempt to stall the saffron party's surge in the southern state.

The apex court, which commenced the hearing at 2.11 am and ended at 5.28 am, however made it clear that the swearing-in and the government formation in the state would be subject to the final outcome of the case before it.

A special bench comprising Justices A K Sikri, S A Bobde and Ashok Bhushan directed the Centre to place before it two communications, sent by Yeddyurappa to Governor Vajubhai Vala in which he had staked claim to form the government, saying their perusal was necessary to decide the case.

The top court also issued notices to Karnataka government and Yeddyurappa seeking their replies on the plea filed by Congress-JDS combine and posted the matter for hearing on Friday.

"This Court is not passing any order staying the oath taking ceremony of B S Yeddyurappa. In case, he is given oath in the meantime, that shall be subject to further orders of this court and final outcome of the writ petition," the bench said.

While senior advocate Abhishek Manu Singhvi, appearing for Congress-JDS combine, persisted with his arguments that the swearing-in ceremony should be stayed or deferred, the bench said, "We are not staying the oath taking ceremony".

"We do not know what transpired in the meeting between the BJP leader (Yeddyurappa) and the governor. I do not think B S Yeddyurappa is served or represented here. The whole thing is in a grey area and in a realm of speculation," Venugopal said.

Rohatgi also questioned the manner in which the petition was filed in the midnight and said, "Heavens will not fall if somebody is sworn-in. This is not a matter of life or death or as if someone is going to be hanged".

He said that constitutional obligation of the governor was to invite a party to form a new government and his action could always be judicially reviewed and the court may order for restoration of status-quo ante also as was done in the case of Arunachal Pradesh.

"Courts should not stop a constitutional functionary (Governor) from discharging his constitutional duty. In this country, action will be amenable but office of the Governor cannot be injuncted," Rohatgi said.

At the outset, Singhvi referred to the number of seats won by the BJP, the Congress and the JD-S and said the Congress-JDS combine has the majority in the house with 117 MLAs while the BJP had only 104 seats which was below the majority mark of 112 at present.

He also questioned the governor's decision to give 15 days time to Yeddyurppa to prove majority in the house and claimed that this might lead to "horse trading" and "poaching" of MLAs.

Singhvi said that they were not sure how much time Yeddyurppa himself had sought from the governor to prove the majority but as per their information, the BJP leader had sought seven days time.

He urged the court to defer the swearing-in, scheduled to be held at 9.30 am on Thursday, till 4.30 pm and said the Centre or BJP should be asked to place before the bench the letters sent by Yeddyurppa to the governor.

However, the attorney general told the bench, "We really do not know what was the basis of which the governor invited him (Yeddyurppa)".

He said that swearing-in should not be deferred or stayed as it was for a constitutional office and no purpose would be served by stopping it since it was "purely a reversable situation".

"Here, there are three major parties. The BJP is the single largest party, the Congress is second and the JD-S is third. Now, the Congress-JDS combine outweigh the BJP. Then, in this situation, on what basis he (Yeddyurppa) has staked claim to form the government? We do not have those letters. It's only on surmises. The arithmetic is such that defies on what basis it was done," the bench observed.

To this, Venugopal raised a doubt on the authenticity of the signatures of MLAs submitted by Congress-JDS combine leader H D Kumaraswamy and said, "They may have given signed letter which may not be genuine".

Singhvi, while contending that "humongous things are happening in terms of money", expressed gratitude that three judges of the apex court were hearing the matter at 2 am.

"If a governor passes an order (inviting Yeddyurppa to form government) at 9.30 pm and the oath taking ceremony is at 9.30 am, I have no option but to make your night black. I am extremely grateful that three judges of the Supreme Court are sitting in the court at 2 am to hear the matter. It is a victory of democracy irrespective of what is the outcome. The democracy has won," he told the bench.

In the May 12 polls, the BJP emerged as the single largest party with 104 members, while the Congress secured 78, the JD-S 37 and others three.