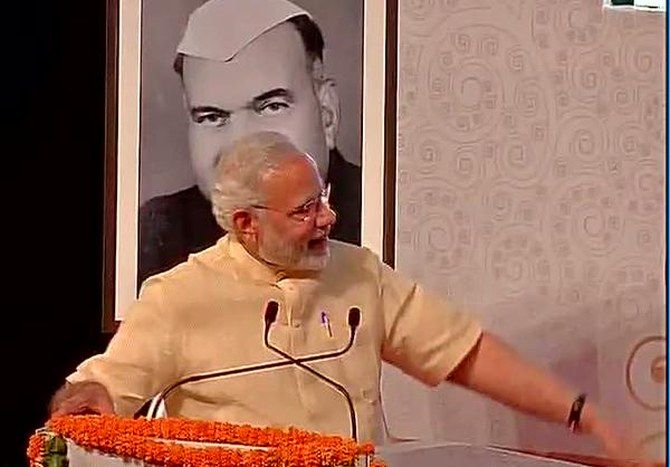 Prime Minister Narendra Modi on Friday took a dig at the culture of dynastic politics and appeared to target Congress by taking a veiled swipe at Sonia Gandhi's son-in-law Robert Vadra who is embroiled in controversies over his land deals.

He also disapproved of political untouchability, saying the national heritage should not be divided and all leaders who have worked and died for the nation should be given equal regard irrespective of their ideologies and affiliations.

Modi, who was in Jammu to commemorate the birth centenary of late leader Girdhari Lal Dogra, hailed him for the selfless contribution to the society without indulging in nepotism.

He noted that Dogra was Jammu and Kashmir's tall leader who had presented 26 Budgets as finance minister of the state but never did any favours for his family members, including his son-in-law Arun Jaitley, now the union finance minister.

"Both (Dogra and Jaitley) took their own routes in public life. But today, we know what kind of talk is going on because of son-in-laws," he said, in an apparent reference of Vadra who is embroiled in controversies related to land deals.

"Today in politics, there is a need to ensure that our heritage is not divided. This is a matter of concern," he said, amid a tussle among political parties to claim the legacy of various national leaders.

His remarks came after Azad said Dogra was "24 carat Congressman", who never "compromised with regionalism, casteism and communalism".

Modi said public life cannot be run by judging a person on the basis of his political party, ideology or leadership.

"There should not be political untouchability. Everybody in public life works with certain ideology but he lives and dies for the nation. We should be proud of them and have equal regard for anybody who has worked and died for the nation, irrespective of their political ideologies and affiliations.

While disapproving political untouchability, Modi recalled that soon after Atal Bihari Vajpayee took over as Prime Minister, a senior Communist leader had died in Kerala.

Vajpayee told L K Advani to attend his last rites even though the Communist leader had steadfastly opposed the Bharatiya Janata Party, the prime minister said.

Highlighting that such contradictions are the beauty of the democracy, he quipped, "we all are sitting here (including Azad), but just wait to see the 'muqabla' (contest) we will have some days".

He was clearly referring to the Monsoon session of Parliament beginning July 21 during which the opposition is expected to corner the government over various issues, including land bill.

Talking about dynastic politics, Modi said that while seeing an exhibition on Dogra, he was happy to notice that none of his family members are in any picture with him, except during his last rites.

"It is a difficult task. It is not easy. Everybody wants to do something for his relatives," he said.

Modi’s visit comes amid reports that he will announce a Rs 70,000 crore financial package for the state. Modi is scheduled to return to New Delhi later on Friday.