Sharing dais with the chief minister during poll rallies, the BJP candidate is often seen standing alongside the 'maharaj' with folded hands. 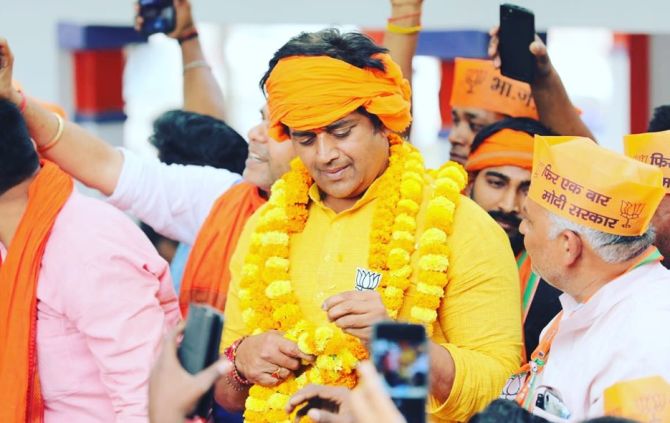 Sharing dais with the chief minister during poll rallies, the BJP candidate is often seen standing alongside the 'maharaj' with folded hands.

Regarded as the fiefdom of the Gorakhnath peeth, the seat with 19.54 lakh voters has 10 candidates in the fray.

However, a direct contest appears on the cards between BJP candidate Kishan and grand alliance nominee, Ram Bhuwal Nishad of the SP.

Though Yogi Adityanath won the seat from 1998 to 2017, the shock defeat during the 2018 bypolls was a massive loss of face for the ruling party, coming months after its emphatic win in the 2017 assembly elections.

The election on the seat, this time round, is being treated by the party and loyalists as an opportunity to avenge the humiliation and restore faith in the leadership of Yogi Adityanath.

"The fight on the seat is to retain the pride of Maharaj... the Hindu Yuva Vahini and the BJP are one in the contest this time round and are in the campaigning as one unit," zonal vice president of BJP Satyendra Singh said.

Leading the campaign from the front is the chief minister himself, who is camping here for the May 19 polling in the last phase and has addressed over two dozen rallies.

This week, he will be holding a big road show in Gorakhpur city along with BJP president Amit Shah.

Lending all out support is the Hindu Yuva Vahini, founded by Adityanath, which has been actively involved in the campaigning with the CM asking for presence of one worker each of the BJP and the HYV at all booths.

Since the defeat in the bypoll had also been attributed to the low turn out, the major focus is on increasing polling percentage in Gorakhpur city.

Local BJP leader Rahul Srivastav said instructions have been issued to bring voters out to cast votes on polling day.

Initially it was the 'outsider' tag which Kishan had to face but he fought and overcame it following his visit to his native Maamkhor village from where his ancestors migrated two-three generations ago to neighbouring Jaunpur.

Kishan is also banking on his popularity, getting his selfies clicked with youth and women. His approachability is giving the BJP a good head start and now it is 'One Mission Ravi Kishan' slogan which has become common.

"Yogi ji has brought me here. We are hoping for a record win now," Kishan stresses.

The saffron party can also draw solace from the fact that the giant killer in the Gorakhpur bypoll -- Praveen Kumar Nishad -- has now switched over to the BJP and has been fielded from Sant Kabir Nagar parliamentary constituency in eastern UP.

That the alliance candidate Ram Bhuwal Nishad belongs to the dominant fishermen caste -- around 3.5 lakh here -- is a fact that suits the Bahujan Samaj Party-Samaj Party who have worked on their arithmetic well.

The joint meeting of BSP and SP at the Champa Devi Park on Monday witnessed a massive turnout even in sweltering heat.

"We will go by what behenji asks us to do...," said Shrawan Kumar, a BSP supporter, who attended the rally.

"Ram Bhuwal Nishad is an experienced politician... he knows all about electoral battles and how they are won... We have a good support base among all castes," Samajwadi Party leader Zafar Amin Dakku said.

Besides other issues, the alliance is raising local issues including death of children in the BRD Medical College Hospital, charging it was due to government apathy, he said.

"We are confident that history will repeat itself and the alliance will once again be pulling down the BJP fortress here. I have the support of the poor and the oppressed," says alliance candidate Ram Bhuwal Nishad.

Sangita Bakaya in Gorakhpur
Source: PTI© Copyright 2020 PTI. All rights reserved. Republication or redistribution of PTI content, including by framing or similar means, is expressly prohibited without the prior written consent.
SHARE THIS STORY
Print this article 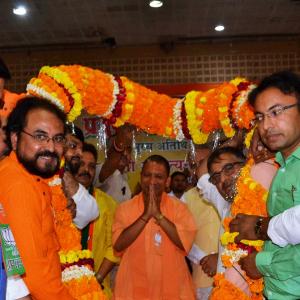 Development or caste: What will win Gorakhpur?