News
Business
Movies
Sports
Cricket
Get Ahead
Money Tips
Shopping
Sign in  |  Create a Rediffmail account
Rediff.com  » News » In Bihar's 3rd phase, all eyes on what Owaisi will do

The goodwill AIMIM chief Asaduddin Owaisi enjoys among a large section of Muslims in Seemanchal, a region his party has focussed on in the Bihar assembly polls, appears unmistakable and many of them express their disaffection with the Congress for not speaking more strongly on issues like the contentious Citizenship (Amendment) Act. 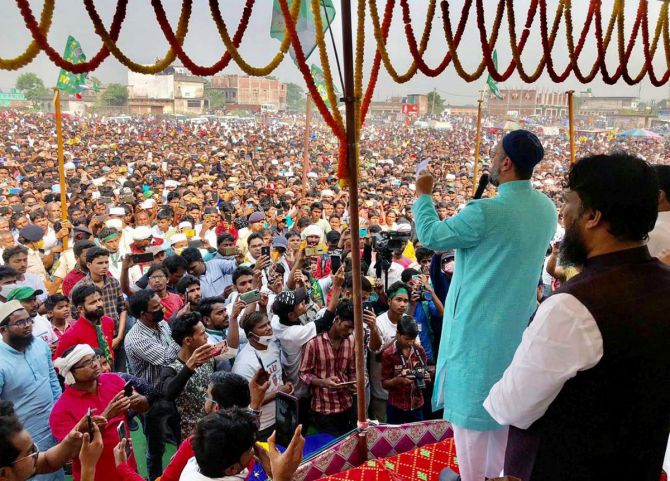 However, as the region with the state's highest concentration of Muslims readies for polls on November 7 in the last phase of the elections, it is the Rashtriya Janata Dal-Congress-Left alliance that draws considerable support from the community amid sporadic voices in Owaisi's support as they weigh their choices.

If there is certain unhappiness among them with the opposition alliance, there also seems to be a realisation that it remains their best bet.

"The local Congress MLA declined to come to our protests against the CAA, fearing it may not be received well by Hindus. Many local leaders, including Pappu Yadav, backed us. Owaisi has been vocal too. But we are expected to cast our votes silently and not complain," Nasim Akhtar, sarpanch of south Simaria panchayat in Katihar, laments.

Akhtar suggests that the opposition alliance takes the community's votes for granted due to a belief that Muslims will back the strongest party against the Bharatiya Janata Party.

As several locals discuss the polls, he says they will vote to defeat Chief Minister Nitish Kumar-led government in the state.

Some of them also praise Congress leader Rahul Gandhi for his strong criticism of the BJP and the RSS.

The Hyderabad MP has, however, been relentless in rallying people's support around his party's 'kite' symbol, as he cites his vocal stand inside and outside Parliament against the CAA and instant triple talaq legislation and asks at his rallies what others, a reference to Congress, have offered to them except "sweet words".

His meetings have been drawing good crowd and have left a section of Muslims impressed.

Mohammad Uzir, a young resident of Tinmania village, describes Owaisi as a "fearless" leader who speaks his mind but adds at the same time that Muslims know that the AIMIM leader cannot form government in Bihar with "one of two MLAs".

Contesting on 24 seats in the Bihar polls in alliance with former Union minister Upendra Kushwaha-led RLSP and BSP, AIMIM has fielded candidates in a number of constituencies, especially those with a high percentage of Muslim voters in this region.

The opposition has been dubbing it the 'BJP's B-team' arguing that the more votes the AIMIM gets, the more advantageous will be the position of the BJP-JD-U alliance due to a split in Muslim votes.

Owaisi has been speaking at length about the Congress's poor record in the last few years in its direct fight against the BJP to ask minority voters to not allow the main opposition party and its allies to "steal" their votes by stoking fear of the BJP.

Seemanchal has 24 assembly seats spread across the four districts of Purnia, Araria, Katihar and Kishanganj. Muslims are over 40 per cent in Araria and Katihar and nearly 70 per cent in Kishanganj, the only Lok Sabha seat in Bihar were the NDA lost in the last year's general election. 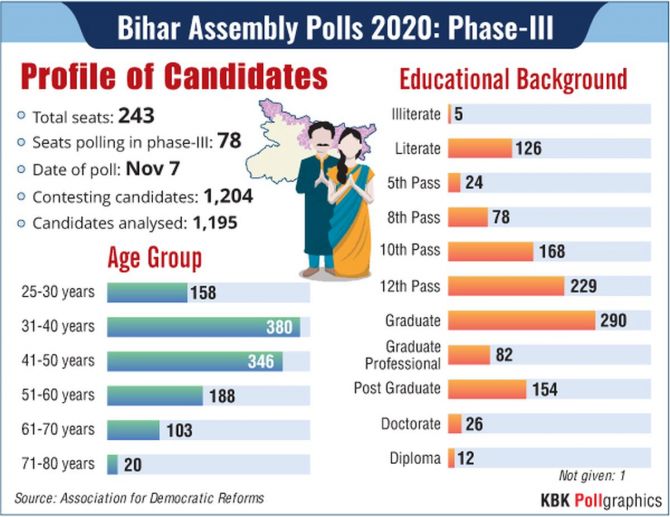 A good percentage of the RJD's traditional Yadav and Muslim votes in Seemanchal and neighbouring Kosi, besides several other seats of the 78 constituencies that will go to the polls on November 7, has given the opposition hope of putting up a good show there.

The NDA, on the other hand, believes that its traditional vote bank will remain intact and give it an edge.

The NDA's best prospect in Seemanchal, its local campaign managers say, lies in a division of Muslim votes and consolidation of Hindi votes in its favour, something which has happened in the past too.

In Muslim-majority Amour in Purnia, sitting Congress MLA Abdul Jalil Mastan has been challenged by former MLA Saba Zafar of the JD-U and Akhtarul Iman of the AIMIM.

If Muslim votes get divided among the two rivals, Zafar stands a good chance, NDA leaders say, claiming that AIMIM is drawing decent support in a number of other constituencies.

The AIMIM, which has long been trying to grow outside its bastion of Hyderabad, had announced its serious presence in the region by winning its maiden assembly seat when Kishanganj bypoll was held in 2019 after its Congress MLA was elected to Lok Sabha.

In Barari, AIMIM has fielded Rakesh Yadav at a seat where the sitting RJD MLA is also of the same caste.

Some speculate that AIMIM can eat into the votes of the opposition alliance in the region in a similar manner Chirag Paswan's Lok Janshakti Party has set out to do against the JD-U across the state.

Several locals also complain that political polarisation in the area in almost every election ensures that development issues are put on the back burner, ensuring that it remains one of the more backward regions of the state.

Habibur Rahman complains that the BJP campaigners hardly come to his village as they believe they will not get votes from here.

"Even opposition parties ignore us at times. They believe what other options we have," he says ruefully. 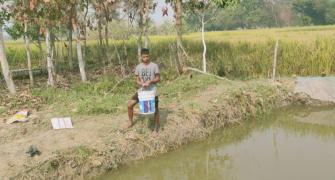 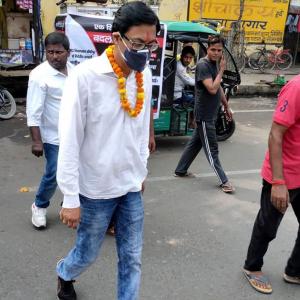