While some members, including BJP's state vice president Chandra Kumar Bose, have been vocal against the legislation, others have been silently questioning the law’s merit and its impact on the party’s electoral prospects in the state, reports Avishek Rakshit. 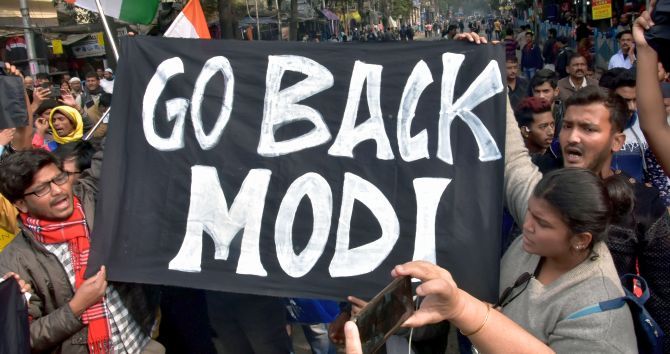 IMAGE: People in large numbers came out over the weekend as Prime Minister Narendra Modi was in Kolkata. The agitators held anti-CAA, 'Go Back Modi' placards and shouted slogans against the legislation. Photograph: ANI Photo

Amid the ongoing nationwide protests against the Citizenship Amendment Act, the Bharatiya Janata Party is not only the target of various sections of civil society and opposition parties but also its own mid-tier leadership in West Bengal.

The state witnessed violent protests against the amended citizenship Act; Mamata Banerjee, chief minister and Trinamool Congress chief, has vowed to oppose the CAA and the National Register of Citizens tooth and nail. She is also coordinating with other parties across India for a spirited opposition to the CAA.

On the other hand, BJP leaders in the state are either lying low or criticising the CAA move in hushed tones. Chandra Kumar Bose, vice-president of the BJP’s state unit, is most vocal with his opposition to the Act in the current form. “The country is above petty party politics. How can I keep quiet when I see that something is happening which is wrong in its current form?”

According to Bose, a descendant of Subhas Chandra Bose (Netaji), the CAA in its current form is against the secular principles of the nation. “I am not opposed to the concept of the CAA. But in its current form, it is discriminatory against the Muslims. I think this community, which is also a crucial part of India’s history and heritage, should be included. Netaji would never have allowed this Act to be passed,” he said.

Some other party leaders aren’t as vocal as Bose but clandestinely have been questioning the merit of the CAA and its impact on the BJP’s prospects in the state. In fact, at a time when the BJP started making deep inroads in the state, the fear of the CAA and the NRC appears to be ruining its prospects.

However, in the assembly by-elections, the BJP suffered a heavy defeat. It not only lost its stronghold, Kharagpur Sadar, but also couldn’t match the TMC in any of the two other seats. Some of the losing candidates, as well as the party’s mid-tier leadership, blamed the hysteria around the CAA and the NRC for the poor showing.

Bose is of the view that if the assembly polls are to be held in West Bengal now, the BJP faces a big defeat.

Political observer Sabyasachi Basu Roy Chaudhury said: “The BJP’s leadership is not univocal about the CAA, which is harming its prospects.”

Mid-tier party leaders are wary of party losing all Muslim votes in the wake of the opposition to the CAA and fear that without the support of this community, which is 30 per cent of the electorate, it is impossible for it to come to power in the state. Political analyst Biswanath Chakraborty said: “Hindus in West Bengal, too, are worried after 1.2 million Hindus in Assam were kept out the NRC.”

Besides, dissenting party leaders are of the view that the CAA cannot be implemented unless the state government cooperates with the Centre, no matter whatever Act is passed. “There are many Acts passed in Parliament, but are all successfully implemented? In a federal structure, the cooperation of the state government is essential for any Act to actually work,” said a dissenting BJP leader from the state.

Despite fissures within the party, the BJP has decided to opt for a counter-opposition strategy and is reaching out to the masses upholding the benefits of the CAA.

Christened ‘Abhinandan Yatra’ or thanksgiving march, in a show of strength, the party is organising such rallies across the state. Its West Bengal president, Dilip Ghosh, on the other hand, has been attacking Banerjee, her administration and the TMC over their alleged involvement in violence and chaos, and for toeing “an extremist line”, which is against the interests of India.

According to the BJP, Indian citizens need not worry about the CAA as the list of documents to prove one’s nationality would include “common official documents”. An acceptable list is yet to be finalised.