United States President Donald Trump has said that the vote by the Democratic lawmakers in the US House of Representatives to approve the process of impeachment against him is an attack on American democracy. 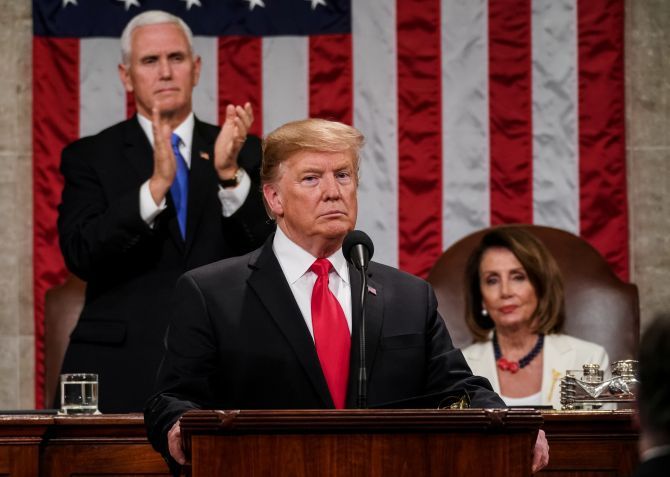 The 435-member lower chamber of the US Congress on Thursday passed the measure, the third time in the history of the modern presidency, establishing rules for open hearings and the questioning of witnesses by members and staff by 232-196 votes.

Democrats enjoy majority with 233 seats in the House of Representatives while the ruling Republican, from which Trump comes, has 197 elected representatives.

“They've been plotting to overthrow the election. Yesterday's vote by the radical Democrats is an attack on democracy itself. But I'll tell you, the Republicans are really strong, the strongest I've ever seen and the most unified,” Trump said during his address at the “Keep America Great” rally in Tupelo, Mississippi on Friday.

So far only two US Presidents Andrew Johnson and Bill Clinton have been impeached by the US House of Representatives but neither of them were convicted by the Senate, as a result no US president has been removed from office using the impeachment process.

In the 100-member Senate, Trump's Republican Party enjoys majority with 53 seats and the Democrats have 47 seats. Given the current composition of the US Congress, the impeachment process is likely to sail through the Democratic controlled House of Representatives and unlikely to be passed by the GOP-majority Senate.

Trump, in his first election rally, also alleged that the mainstream American media is too involved in this conspiracy.

“The media and the Democrats have been engaged in a corrupt partnership trying to impose their will and to thwart American democracy. And shifty, Adam Schiff and the media are continuing with the deranged impeachment witch hunt, this is one I never thought I'd be involved in, the word impeachment,” he said.

Trump said that the "Democrats voted to potentially nullify the votes of 63 million Americans disgracing themselves and bringing shame upon the House of Representatives.”

The impeachment process has started deepening the bitter political divide in the US, which over the next few weeks and months is likely to develop into an unprecedented mudslinging and war of words between the Democrats and the Republicans.

“Make no mistake. They are coming after the Republican Party and me because I'm fighting for you, they don't like it. This is different. They've never had anything like this. And they know they can't win,” he said.

Trump scoffed at Democrats' claim that he was so fearful of Democratic frontrunner and former vice president Joseph R. Biden that he asked Ukraine to investigate him for corruption.

“Gee, I guess there's only one way -- let's call up Ukraine for help,” he said mockingly.

“These people are sick. And here's the good news: the people get it,” he said.

The president alleged that Hunter Biden, son of the former vice president, received “a payoff” for his position on a Ukrainian energy company board.

“Experience with energy, he knew less about it than this young — How old are you? Six? This young beautiful person in front. And this young six-year-old is smarter. So I think I'd basically go with her,” he said.

Earlier in the day, Trump told reporters at the White House that he cannot believe that the Democrats can impeach a president when the economy is doing so good.

“The Democrats are crazed. They're lunatics. In the meantime, we have the greatest economy ever. We have a man on the other side, Adam Schiff, who is a corrupt politician, as you know. He's a corrupt politician. He made up a speech and he read what I said and it wasn't what I said. It was a terrible thing he said, and many people saw that. That's how this whole thing--he started it as a con,” he said.