US lawmakers seek to hold Trump accountable for Capitol storming

Top American lawmakers on Wednesday sought to hold Donald Trump, the outgoing President, accountable for storming of the Capitol Hill by his supporters on January 6. 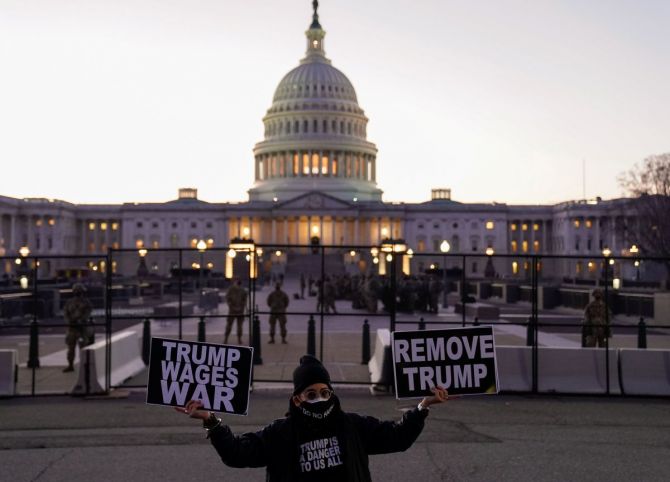 IMAGE: A protester holds signs near the US Capitol in Washington, DC. Photograph: Erin Scott/Reuters

"Every moment Donald Trump is in the White House, our nation -- our freedom -- is in danger. He must be held to account for the attack on our capitol that he organised and incited.

"I solemnly urge my colleagues to support this rule and the underlying article," Congressman James McGovern said on floor of United States House of Representatives.

McGovern brought to the House Floor H. Res. 24, the article of impeachment against Trump.

The article charges the President with 'Incitement of Insurrection' for his actions on January 6, 2021, when he delivered a speech inciting his supporters to lay siege to the United States Capitol.

This riot temporarily halted the counting of Electoral College votes and led to the deaths of five people, including a Capitol Police Officer.

"The damage this building sustained can be repaired. But if we don't hold Donald Trump accountable, the damage done to our nation could be irreversible," McGovern said.

Majority Leader Steny H Hoyer in an interview to MSNBC said that the President Trump does things beyond the law.

"This President does things solely for his own political interest or personal interest, not for the country's interest. That's what some Republicans are saying now."

John Katko said that if we do not address this, then we will be shirking our duty and the Congress and Constitution will be at further risk and our democracy at further risk.

"Those are the stakes," he said.

"We're here because we have to protect the fundamentals of our democracy. But unless we have a very strong message that this does not stand in the United States of America, this will happen again," said Congresswoman Chellie Pingree.

"Rather than contribute to healing a divided nation, the Democrats' effort will likely drive us even further apart. It's time for us to tone down the political rhetoric; to work together to solve the problems that face our nation.

"It's time for us to put aside our differences, and find common ground. After all, we're all Americans," he said.

Congresswoman Cindy Axne said that the violent attack on our democracy was no accident.

"For months, the President had used the power and pulpit of his office to spread lies about the legitimacy and security of our elections.

"And then, in a desperate attempt to overturn his own loss, he pressed his supporters to impede the certification of his own election," he said.

"Regardless of the remaining time in the President's term, his crime is too great for us to ignore. For the safety of our nation and its citizens, President Trump must be removed from office," Axne said.